A lot happened this Tuesday night on The Flash and in Arrow‘s Season 8 premiere, as Barry Allen got his first taste of the anti-matter-related Crisis to come, while Oliver witnessed its destructive power first-hand.

As such, you may have some lingering questions, and we’ve rounded up some answers. But as always, email InsideLine@tvline.com with any additional scoop-seeking Qs!

WAS THAT ABSOLUTELY EARTH-TWO THAT GOT ATTACKED ON ARROW?
Absolutely. For one, Arrow showrunner Beth Schwartz confirmed that she made sure with her colleagues at The Flash that it was “OK” to have a wave of anti-matter consume Earth-Two (from which characters such as Harrison Wells and his daughter Jessie hailed), and “they were very gracious.” Secondly, Arrowverse producer Marc Guggenheim said on Twitter, “You’ll learn the state of Earth-2 next week.” (If the promo can be trusted, the Monitor says it has in fact been “erased from existence.”) And if you demand a third affirmation, just look at how Jay Garrick’s map denoted the next target. Boy, is Oliver gonna feel like crap when he fires up his DVR back home and sees this:

WILL ARROW VISIT OTHER ALTERNATE EARTHS?
“Besides the [‘Crisis on Infinite Earths’] crossover,” Schwartz said that the season opener “is the only episode of Arrow that is on a different Earth.” 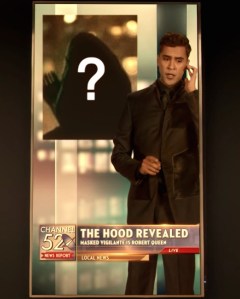 DIDN’T THE FLASH ALREADY ESTABLISH THAT ROBERT QUEEN WAS ‘THE HOOD’ ON EARTH-TWO?
Yes, an Earth-Two news broadcast in The Flash 2×06 mentioned that Oliver Queen did not survive The Queen’s Gambit‘s sinking, and thus Robert Queen went on to become The Hood. And yet Adrian Chase was revealed as The Hood in Arrow’s season opener. Guggenheim explained on Twitter that, Diggle included, “More than one person has worn the hood on Earth-1. Why assume things would be any different on Earth-2?” He added that the apparent passing of the Earth-Two baton “is a reflection that 6 years have passed” since Papa Queen turned vigilante.

HOW DID DIGGLE’S SON J.J. WIND UP BEING DEATHSTROKE LEVELS OF EVIL?
J.J. and Connor (Ben Turner/Bronze Tiger’s son, whom Diggle and Lyla at some point adopted) “have this really fraught childhood that we’ll explain more in the upcoming episodes,” says Schwartz. “[We’ll see] how they got to this place where … JJ is willing to kill his own brother, and how he went down this path.”

IS ARROW‘S 2040 STORYLINE SETTING UP THE SPINOFF?
It was announced last month that Arrow‘s penultimate episode will serve as a backdoor pilot for Green Arrow and The Canaries, a spinoff starring Katie Cassidy Rodgers, Katherine McNamara and Juliana Harkavy. Schwartz, though, says the prospective offshoot “didn’t really” affect Arrow‘s Season 8 plan for Mia, Connor et al “We always knew what that story was going to be, and the pilot is its own kind of different beast,” she explained.

SPEAKING OF KATIE CASSIDY RODGERS: IS SHE STILL A SERIES REGULAR?
Though billed in the Arrow premiere with “Special Appearance By” (as opposed to last season’s “With”), the original cast member is still a series regular, TVLine has confirmed. 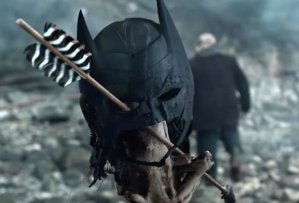 WHAT WAS WITH BATMAN’S MASK REPLACING DEATHSTROKE’S?.
Sometimes a fun Easter egg is just a fun Easter egg; so, speculate if you wish that Earth-Two’s Bruce Wayne mentored Robert Queen. “Thank god for Batwoman,” Schwartz says of the Bat-nod. “Now that they’re in our universe, we’re able to get away with a lot more things Batman-related.” Guggenheim meanwhile gave props to FX firm Zoic Studios for “working this in so seamlessly to our original pilot footage.” (With reporting by Vlada Gelman)