If you’ve already binge-watched Homecoming and Dirty John, but still crave more podcast-inspired TV, you might want to log onto Facebook. The social networking service on Wednesday dropped the first two episodes of Limetown, a drama starring Jessica Biel.

Based on the 2015 fiction podcast of the same name, Limetown follows Biel’s Lia Haddock, an American Public Radio journalist trying to piece together the as-yet-unsolved mystery of the titular locale.

As we learn in Episode 1, here’s what went down in Limetown, a research facility in Tennessee: In 2003, the world’s top neuroscientists and their families gathered there, with a mission that was never made clear. On a February night in 2004, a distress call went out from inside the town — the 911 call features a frantic woman yelling, “Shut it off! Shut it off!” — but when first responders arrived at the Limetown gates, they were denied entry by a private security force.

Eventually, after a several-day standoff, the security force relented, and first responders entered Limetown… only to find that all 326 residents had vanished without a trace. To this day, no one knows where the Limetown inhabitants went, nor is it clear what prompted that distress call in the first place.

Cut to 2019, when Lia is revisiting this mystery for a potential series of APR episodes. Her editor, Gina (The Fosters’ Sherri Saum), isn’t impressed thus far; even though Lia has a personal connection to Limetown — her uncle is among the missing — she hasn’t brought any of that poignance to her recordings. And she’s a month past her deadline. Despite Lia’s protests, Gina pairs her up with another editor named Mark for the remainder of this project, then gives her one more week to come up with something impressive. If Lia can’t turn her Limetown podcasts into something more than “a historical document” of the tragedy that happened there, she’s gotta call it quits. 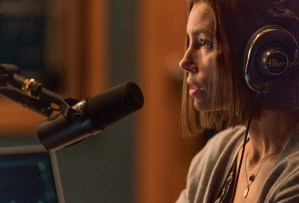 Ambitious as ever, Lia then interviews two more people connected to Limetown: Terry Hilkins, the only journalist in attendance at the community’s opening day ceremony, and FBI Agent Calhoun, who led the bureau’s investigation of those 326 disappearances. We learn a few new details about the tragedy during Lia’s conversations with them. Dr. Oskar Totem, Limetown’s de facto leader, was ultimately burned on a pyre in front of the entire town; some residents used heavy furniture to blockade their doors, though we don’t exactly know why; a pile of dead pigs was discovered in a field once the FBI arrived; and, most interestingly, there’s an intricate network of caves running underneath Limetown, which have since been sealed off. Lia isn’t allowed access to the caves (yet), but it seems mighty likely that something sinister originated down there.

Still, none of these details are enough for a compelling story, and even Agent Calhoun admits that “the answers might be there, but that doesn’t mean you won’t go crazy looking for them.” Lia, a bit disheartened, records her final draft of the report anyway — and just when she’s in the middle of doing that, she gets a frantic call from journalist Terry. He’s been contacted by an actual Limetown survivor — a legitimate one, he assures Lia — and the woman wants to speak with Lia.

“I will only talk to you,” the survivor tells Lia when she comes on the line, using a voice changer to disguise her identity. “That’s the only way this will work… You’ll hear from me.” Click.

Suffice it to say, Lia gets the green light to continue with her reporting. (“Historical document, my ass,” she cracks to her editor.) But there’s reason to believe Lia’s investigation will go south: At the beginning of Limetown’s premiere, the show jumps eight days in the future, and Lia is in a hotel room in the middle of the night. Suddenly, there’s a series of loud bangs — which we learn are the sounds of a 40-something man beating his head against Lia’s hotel room door — followed by anguished screams.

“This is your warning!” the man yells to Lia as he keeps banging his skull on her door. Even with tears in her eyes, Lia bangs right back on the wall that’s separating them, screaming back, “You! Can’t! Scare! Me!” (I, however, am very, very scared.)

OK, your turn. What did you think of Limetown‘s first episode? Grade it in our poll below, then drop a comment with your full reviews.