The sun finally rose on Wednesday’s episode of American Horror Story: 1984, and what those poor children witnessed upon arriving at Camp Redwood will scar them for life.

This week’s party got started with a flashback to 1980, the year Donna Chambers watched her father kill himself in front of her. And this wasn’t your run-of-the-mill traumatic suicide, either. Poor Donna walked in on him moments after he gutted his presumed mistress (who was still convulsing with her entrails strewn about the bed, just in case you needed a little more color to this story).

“You were never supposed to know this side of me,” Donna’s father explained. It turns out that Papa Chambers had been murdering women for as far back as he could remember, something about having an insatiable hunger for evil… I don’t know, I was too distracted by the woman’s vital organs pulsing to the beat of “Knock on Wood” mere feet away from this conversation.

Poor Donna — or “DeeDee” as her serial-killer father called her — insisted that no one is born with that kind of darkness, and that she could use her psychology powers to heal him of this heinous impulse. Yet he maintained, “I was born with this, and I’ll die with it.” And he did exactly that, plunging a knife into his neck and grabbing an express elevator to hell.

The next time DeeDee saw her daddy was in 1984. She didn’t even have time to process Richard’s apparent revival (“I was reborn — dead, then raised up by the Unholy One himself”) before her father appeared in ghostly form to lure her to the dark side. “Evil is born,” he sid. “And you are the fruit of its seed.” It wasn’t the greatest sentiment, but as far as father-daughter threats go, it was kind of poetic.

That’s when the episode suddenly got… romantic? Brooke discovered Ray — you know, the guy whose head fell off a few weeks ago — walking through camp, disoriented and completely unaware of how he got there. They found shelter in the dining hall, where Brooke opened up to him about her checkered past, before really opening up to him. 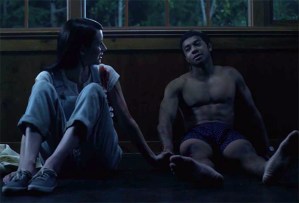 After losing her virginity to a ghost — which is the most American Horror Story-appropriate sentence I’ve ever typed — Brooke looked to quench her thirst with something from the fridge, only to discover Ray’s severed head literally chilling on the top shelf. This sent her running scared to Montana, who had officially run out of f–ks. She told Brooke everything, including that she sent Richard to kill her, setting the stage for an epic fight to the death.

As the sun rose over Camp Redwood, a bus full of excited campers arrived just in time to see a blood-soaked Brooke standing over Montana’s lifeless body. Given the optics, you can’t exactly blame the police for taking Brooke into custody, nor can you blame Richard and Jingles for stealing a cop car and road-tripping to Los Angeles. (They’re bad guys, it’s what they do.)

Ray, on the other hand, wasn’t so lucky. He was successfully loaded into an ambulance, but the minute it crossed the camp entrance, he found himself back on the road. “I just wanted to go home,” he lamented, to which a familiar voice replied, “You are home.” It was the hitchhiker!

The duo then joined Montana — well, the ghost of Montana — who had just shot a cop in cold blood. When they tried to wag a finger at her, she finally dropped the P-word, telling them, “You guys are doing this purgatory thing all wrong. We can be gods here!” So, there you have it, folks. Lest there be any doubt, Camp Redwood is purgatory. 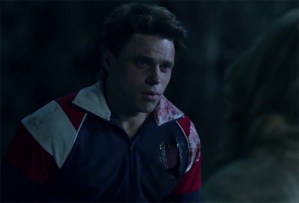 * Chet joined Trevor in hot-guy heaven after going on a particularly tragic moonlit boat ride with Margaret. Given the events of the evening, she suggested that Chet make peace with God while he still has time, an offer he less-than-politely declined. His insolence was met with an oar to the face and a burial at sea. Well, a burial at lake.

* Xavier also met a gnarly death at Margaret’s hand, but not before (temporarily) saving the day by pelting Jingles with a series of well-aimed arrows. His heroic moment was even punctuated by a cheesy ’80s finishing line: “When you put me in that oven, you cooked up your worst nightmare, a–hole!”

* Lastly, we need to talk about this promo for next week’s 100th (!) episode. Are we merely being baited with these quick cuts from seasons past, or do we think there might be some sort of full-circle twist in the cards? Give it a play:

Your thoughts on this week’s AHS? Hopes for next week’s milestone hour? Whatever’s on your mind, drop it in a comment below.