The Resident celebrated Halloween with its latest episode and, appropriately, the hour was a total nightmare for multiple doctors at Chastain Park.

Let’s put it this way: One of Conrad and Devon’s patients was a young man who believes, along with his girlfriend, that he’s a vampire — and even that wasn’t the scariest subplot. (Viewers at home should be a little fearful, though: After clashing on how to treat the patient — one week after Conrad essentially tortured someone in Chastain’s care, that is — Devon asserted that he and Conrad simply have different belief systems, and it’s unclear whether they can continue working together without incident. But more on that in a minute.)

Dr. Barrett Cain had the roughest go of it in Tuesday’s episode, though, after volunteering to treat a white supremacist named Hades. After learning that the patient had a condition that left him with alternate personalities — one of them being the white supremacist, the other just a regular ol’ twentysomething named Douglas Atwater — Cain decided to proceed with surgery that would remove harmful tissue from Douglas’ brain and banish Hades for good. But Cain’s hubris got the best of him: After making hasty surgical decisions against the advice of Nic and Dr. Bell, Cain completed the procedure, only to realize he’d made a mistake. He did eliminate one of the personalities, yes — but he got rid of nice guy Douglas, leaving super-racist Hades to wreak havoc unchecked.

“We want the audience, in the next batch of episodes, wondering if this will be the thing that shifts [Cain] into a place where he can get back in touch with whatever moral compass he actually has,” executive producer Todd Harthan tells TVLine. “We’re going to touch on whether he has been affected in a meaningful way by this experience. We’re going to be asking this question of, ‘Can people change, or are we who we are?’ That’s something we’re exploring with him, leading up to our midseason finale.” 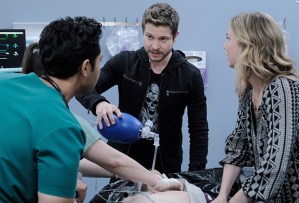 Harthan adds that Cain’s relationship with Dr. Bell will be a “roller coaster ride of conflict and hope” in upcoming episodes, given that Bell’s “head is on the chopping block” after this latest mistake from Cain.

“Maybe Bell, who has evolved, can have a positive influence on Cain. Maybe he can turn Cain into a version of himself, and they can be successful together,” Harthan suggests. “On the flip side, there is Cain’s resistance to change. He is who he is, and that relationship is evolving into one that’s incredibly toxic. We’re keeping the audience guessing.”

That tension will play out against the backdrop of Red Rock Mountain Medical’s continued influence at Chastain, as the conglomerate continues to encroach upon the hospital’s daily operations. According to Harthan, the fight against Red Rock “is going to have a huge impact on various characters, not just one. The audience needs to be very nervous for the Raptor, Conrad, Nic, Bell… The stakes are going to go through the roof in the next few episodes.”

As for Devon and Conrad’s strained relationship, the EP says fans “should be worried” about how the docs will proceed after reaching an impasse with their approaches to treatment.