“The Battle begins now!” Oh, how I’ve missed The Voice host Carson Daly stating the obvious before each sing-off. (Honestly, I have — it’s so freaking goofy, yet I’ve come to love it.) And once coaches Blake Shelton, Kelly Clarkson, John Legend and Gwen Stefani each added a final Blind Auditioner to their teams Monday, Season 17’s Battles did, in fact, begin, with six singers entering the duet-or-die phase of the competition. How many finished their numbers still on the show, and how many finished them… er, finished? Read on, and after we review the last of the Blind Auditions, we’ll take “note” of what went down.

The Last of the Blinds 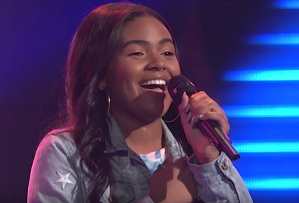 Zoe Upkins (Team Legend), “Angel of Mine” — Grade: C+ | The 16-year-old goddaughter of gospel singer Sarah Gaines is adorable to the nth — she even called John sir. But with the teams so close to being filled, I didn’t hear anything compelling enough about her voice to have made her a three-chair turn. Sure, she handled her runs like she’d been training for a vocal marathon, and when she wasn’t flat as an album, she had a nice tone. But a three-chair turn that would inspire John to see her Monica cover and raise her another (he turned “The Boy Is Mine” into “The Girl Is Mine” in recruiting her)? Nope. Didn’t get it.

Matthew McQueen (Team Blake), “Someone You Loved” — Grade: B+ | The son of the “other” Steve McQueen (and, he joked, Lightning McQueen) strolled onto the stage so utterly in control of his voice that you could’ve convinced me that he had a remote for it. So I couldn’t believe he was nearly finished with his performance before Kelly and Blake turned their chairs. (I know they and Gwen only had one spot each left, but… damn!) By then, Matthew had demonstrated twice over that he has range, a sexy-sandpaper rasp and the ability to not only keep his cool but sound cool under pressure. Anyway, he made it. And going forward, it probably wasn’t going to hurt him that he looked like, as John put it, “a very handsome movie villain.” 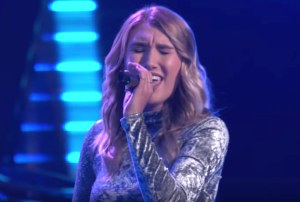 Gracee Shriver (Team Kelly), “Rainbow” — Grade: B- | That heavy pre-performance sigh notwithstanding, this teenage tennis player stepped into the spotlight with the determination of a future Wimbledon champ. From the get-go, she served a vulnerability and a clarity of voice that drew you right in… only for her reliance on her vibrato to eventually threaten to push you right back out. She’s a good singer, that was clear. But in the future, she might want to be careful not to use so much vibrato that she sounds more like a goat than a contender.

Caroline Reilly (Team Gwen), “Somebody to Love” — Grade: C | Given that this was the last Blind of the night and the season, there wasn’t much doubt, was there, that the contestant was going to be the “princess girl” Gwen kept going on and on about wanting on her team. Caroline turned out to be a rock princess, but still, Gwen was happy. I wasn’t sure that the 16-year-old was long for the contest, however. Her voice has some power to it, definitely, but she wasn’t a “wow” the way, say, Moriah Formica was in her Season 13 Blind.

The First of the Battles

Team Legend: Khalea Lynee (Grade: B) defeated Zoe Upkins (Grade: B+) on “The Boy Is Mine” — Zoe saved by John | Once Khalea and Zoe got done being starstruck over the fact that former Voice coach Usher was their advisor, John, inspired by his teenage contestant’s Blind, assigned them another Monica hit for their Battle. And even in rehearsal, it seemed like the sing-off was Khalea’s to lose; she owns her talent, whereas her young opponent is still, like, renting to own. On stage, Khalea performed with so much polish, sunglasses should’ve been issued to watch. She slayed, packing her voice with enough attitude for three people. But Zoe surprised the hell out of me — she brought it, then went out, got some more and brought that, too. She slayed and then some. In the end, I couldn’t believe I would’ve awarded the win to Zoe, not Khalea. 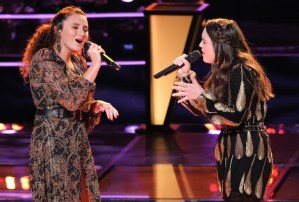 Team Blake: Kat Hammock (Grade: B) defeated Josie Jones (Grade: B-) on “Take Me Home, Country Roads” | I might’ve thought these youngsters were only pretending to know who their advisor was — Hootie and the Blowfish frontman Darius Rucker — were it not for the fact that Josie learned to play guitar with his “Wagon Wheel.” And Kat named Bread, of all bands, as one of her faves. My heart was with her, based on her Blind, but I refused to invest too heavily — every season, there’s a kinda-ethereal teenage girl whose voice I really dig, and it never ends well. (Yes, I’m still bitter about Jaclyn Lovey not getting further in Season 14.) Plus, Kat was already in trouble in rehearsal — her usually-airy vocals, Blake and Darius warned, weren’t going to be any match for Josie’s louder ones. When the girls took to the stage, Josie had the clear advantage. She pushed a little too hard at times — less can be more, kiddo — but she sounded so authentically country, she might as well have been singing while chewing on a piece of hay. Kat’s performance was lovely, too — really lovely — but understated, and I couldn’t imagine Blake choosing subtle over obvious. So color me as delighted as surprised!

Team Kelly: Shane Q (Grade: B-) defeated Melinda Rodriguez (Grade: B+) on “Too Good at Goodbyes” — Melinda saved by Kelly | In rehearsal, we were reminded that Kelly’s mentor Normani knew a thing or two about tackling a Sam Smith song (since she’d dueted with him on “Dancing With a Stranger”). Step No. 1, she suggested: Get in the same pocket, guys. Step No. 2: Don’t be afraid to hit a false — as in falsetto — note. And in the moment of truth, Shane admirably held back at first; this wasn’t another episode of All Runs, All the Time With Shane Q. And he did manage to hit the falsetto, but it sounded like he was struggling through a good bit of the song, like it was a fight for him. Not an unpleasant fight to listen to, mind you — and his rasp was a cool surprise. But it all generally sounded like it came more easily and more naturally to Melinda. There was a point where she hit a big note so casually that I would’ve believed she was just stopping by The Voice for a one-off performance in the middle of her sixth world tour. She was so confident, and deservedly so.

So, who gave your favorite Blind Audition Monday? And who stood out during the first Battles? Vote in the polls below, then hit the comments.