What’s up on The Flash is this season’s introduction of Chester P. Runk, a scrappy scientist whose experiment-gone-awry demanded Team Flash’s intervention — and who, eventually, might become one of their superfriends.

In the comic books, Chester (or “Chunk”) was an overweight cosmologist whose ill-fated encounter with a matter transmitting machine left him with the ability to create black holes. (As a side effect, he needed to consume 47 times his own body weight to stay “fueled.”)

The CW series’ iteration of the character more or less became one with a black hole he accidentally created in the Season 6 premiere, until Barry & Co. managed to shutter the opening while keeping Chester intact.

“Chester P. Runk was one of my favorite characters from the late-’80s run of the Flash comics,” showrunner Eric Wallace tells TVLine. “I was a young, African-American comic book reader, always looking for my own face in the comic books, and here was a character who, even though he was presented as villainous at first, eventually becomes not only an ally but a friend of [Wally West’s] The Flash.

“He has these really wild, sci-fi powers that involve physics, but more importantly, he’s a scientist,” Wallace notes. TV’s The Flash thus set out to “present that kind of positive image for POC audience members to see up on the screen — not that we don’t already have some, but let’s add a new one!”

Also attractive to Wallace is the fact that Chester is a self-made inventor and not some well-funded genius. “I thought those were all important messages to send out, so people can see, ‘You don’t have to have a multi-million dollar facility to make a great contribution to the world.'”

Upon first seeing the dailies of actor Brandon McKnight’s “absolutely wonderful performance” as Chester, “the first thing I said was, ‘How quickly can we get this guy back?'” says Wallace. “We want to get to know him a little better and let him interact with Team Flash a second time, very soon.” After all, among other things, “He’s got to ask Natalie out, and I want to see that story,” says the EP. “Science people can find love, too.”

When last we saw Chester, he had survived his separation from the black hole but had eyes that glowed with orange dark energy. What sort of powers might he wield once he stabilizes? As in the comic books, “Will Chester be a cosmic-powered being? The answer is no,” affirms Wallace. “At least not for a long time.”

And despite his experience and following as a vlogger, the newbie is not in line to join Iris at the Citizen. “No, he is not the new staff member,” says Wallace. “That person arrives in [Episode] 6×02.” 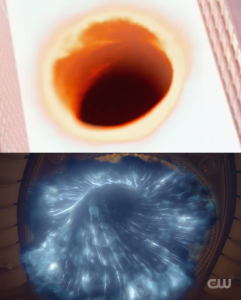 Speaking of Chester and the black hole he unleashed on Central City, we had to ask Wallace about the fact that not 48 hours prior, Supergirl had her own run-in with a black hole, in her Earth’s National City. Was it, like, “Black Hole Week” on The CW?

Upon learning of Supergirl‘s own premiere storyline,”I laughed… out… loud,” Wallace says. “Even though we’re all in the same Arrowverse, we’re all so busy sometimes that we don’t get a chance to talk to each other as much as we would like to. So imagine my surprise when it was brought to my attention — after, mind you, both scripts had already been published, approved, and gone into pre-production!

Wallace admits that at first, he was “really worried” about the unplanned similarity, but upon watching Supergirl, “what I loved is that theirs is as different as you can humanly get in approaching the black hole phenomenon. So I was like, ‘No, we’re fine.'”

But… shouldn’t the black holes at least have looked the same in Central City and National City? “Well,” Wallace smiles, “that’s a post-Crisis question, isn’t it?”