Succession‘s Roy family wrapped up Season 2 by hashing out their issues aboard a luxury yacht… and one key character went down with the ship.

Sunday’s finale starts back in D.C., with a bewildered Cousin Greg withering under the glaring spotlight of a tough Congressional inquiry, while Logan takes a call from a big-time shareholder, warning him that someone needs to take the fall for the cruise ship scandal… and “we feel that probably it should be you.” Logan doesn’t love that idea, of course, and gathers his brood in Venice for a stay aboard his decadent mega-yacht. (It’s almost like a Below Deck Med crossover episode.) There’s plenty of drama afoot: Willa’s play got hammered by bad reviews, Kendall brought Naomi Pierce along… and Tom is very flustered about Shiv planning a threesome with him and an old female friend. 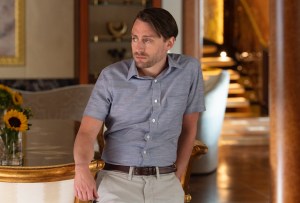 Roman’s there, too, after escaping that unpleasant hostage situation, and he might have a deal to take Waystar private — along with a cellphone video of Karl defecating in a bucket. He, Kendall and Shiv speculate about who might be the next CEO, now that Rhea is out. It could be Greg, even! (Kendall: “Are you ready to step up?” Greg, not hearing: “It’s a fungus, they think? A benign fungus.”) When Logan arrives, Laird tells him the private money deal is all but done, and sings Roman’s praises in closing the deal. But Roman speaks up and reveals he thinks the deal is “probably bulls–t” and exposes how Laird stands to benefit from it financially. Karl sides with Roman, and Logan says no deal, with an angry Laird sarcastically wishing them luck with the coming shareholder revolt.

Logan is a bit shellshocked when confiding in Kendall, but he says no to bringing in Stewie again, and the mood is grim. (Even Tom knows there’s going to be “a head on a spike.”) Connor comes begging to Logan for one of his newspapers to cook up some good reviews for Willa’s play… and oh, a loan of “a little hundred mill” (!). Logan says yes — but only if he gives up his silly presidential bid. Then he invites everyone to drink up tonight… because tomorrow, they’ll have to come up with a plan together. Roman gleefully starts taking bets on who’s getting canned, and Logan raises some alarms about Naomi joining Kendall on the boat. “I just don’t want you f–ked on drugs,” he bluntly tells his son, and a compliant Kendall sends her away the next morning. Plus, Tom finds a way to ruin the threesome before it even starts, concluding he’s just not feeling that “naughty.” (Not a shock, to be honest.) 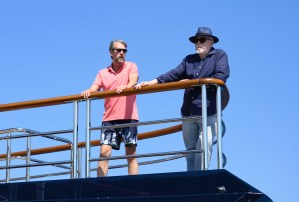 When day breaks, Connor orders a full bottle of Burgundy for breakfast before Logan announces that, if they have to get rid of somebody, “the obvious choice is me.” The rest talk him out of it, though, and Logan insists he needs “one meaningful skull” to serve up to the shareholders, promising to take care of whoever volunteers. Kendall throws Gerri to the wolves, but Logan shoots that down: “There is no one more loyal than Gerri.” Roman suggests Frank, and Frank deflects to Karl. When Gerri’s name comes up again, Roman leaps to her defense (a little forcefully), and then suggests Tom, since he’s head of cruises. Kendall piles on, citing his Congressional meltdown, and even Shiv says that “Tom looks logical.”

Kendall thinks Tom isn’t a big enough skull, though, and Roman recommends they spice his sacrifice up with “some Greg sprinkles.” (Greg: “I object.” Roman: “Who cares?”) Connor volunteers himself, in hopes of grabbing a golden parachute, but Logan walks away from the table, thinking they have “half an idea” and they’ll finish up later. He and Kendall take an emergency meeting with Stewy, offering to accept the hostile takeover on certain terms… but Stewy flatly says no. He shrugs off Kendall’s anger, thinking he and Sandy have the shareholders on their side. Meanwhile, Shiv and Tom share a private beachside picnic, and Tom fumes about how she threw him under the bus — and how she sprung an open marriage on him on their wedding night. (“I am not a hippie!”) He confesses he’s been “pretty unhappy” with her, and works up the nerve to talk to Shiv’s dad. Actually, though, he just sits down next to Logan and takes an awkward bite of his chicken before fleeing.

Shiv huddles with Logan, and he promises if Tom is the victim, “I’ll take care of him.” Then he drops a bombshell: “Ken works… it hurts.” But “it plays,” too, he thinks. He turns to his daughter and asks her what she thinks, noting that this is a job for a future CEO. Shiv hesitates, but then tells her dad: “Just not Tom… Please. For me.” Later, she calls in Kendall to see Logan… and Kendall sees the writing on the wall. Logan says Tom and Greg won’t work, and the shareholders won’t accept him stepping down himself. (Which is a lie, but anyway.) An ashen-faced Kendall assures him it’s OK, as Logan prepares him to confess: He knew everything about the cruise troubles, and will take the fall. 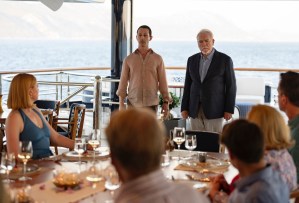 Kendall needs to know, though: “Did you ever think I could do it?” (Be the CEO of Waystar, he means.) Logan stammers and delays until he concludes: “You’re not a killer. You have to be a killer.” Kendall realizes he might deserve this after what happened with the caterer at Shiv’s wedding, but Logan brushes all that off: “It’s nothing.” Kendall kisses his dad on the cheek, and they head in to tell the rest. Roman protests, but shuts up quickly when Logan tells him he’ll be elevated to full COO. Kendall jets home to face the media in a press conference — in an echo of his TV interview in the Season 2 premiere — but when he sits down, he announces that his father is a “malignant presence, a bully and a liar” and knew about all the wrongdoing at Waystar. He even offers incriminating records with Logan’s signature on them — thanks, Greg! — and concludes of his father: “I think this is the day his reign ends.” Whoa. The Roy family war, though? It’s only just begun.

Alright, it’s your turn: Give tonight’s finale a grade in our poll below, and then hit the comments to share your thoughts.