If adding Paul Rudd to any film or TV project makes that project better — and I think we can all agree it does — Netflix doubles down on that notion with its new series Living With Yourself, debuting next Friday, Oct. 18 on the streamer. (I’ve seen all eight episodes.) The immensely likable Rudd puts his casual charisma to great use here in a boldly surreal, Charlie Kaufman-esque sci-fi comedy, and though it runs out of narrative gas in later episodes, the unapologetically weird concept and Rudd’s appeal make it worth sticking around to see how it all turns out.

Rudd is perfectly cast as Miles, a sad-sack corporate lump who gets a tip from a newly rejuvenated coworker: a mysterious “spa” that turned his life around. Desperate for a change, Miles takes the cash he and his wife were saving for fertility treatment and hands it over to the sterile, dystopian spa, which promises to rebuild his DNA “better than ever.” But after a mishap amusingly scored to Enya’s syrupy New Age staple “Orinoco Flow,” Miles wakes up buried in a shallow grave out in the woods, wrapped up in cellophane. He hobbles home to find another man in his bed — another him, in fact! 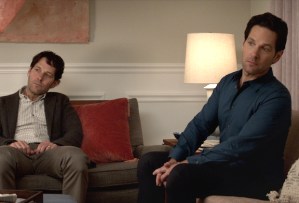 Yes, the spa cloned Miles, making a better version of him and implanting it with all of his memories. (The old body is usually dissolved. They do offer him a discount for the inconvenience, though.) It’s a rich set-up full of existential angst that serves as a wicked jab at self-improvement culture: If you had to hang out with the best version of yourself, would you even like them? Always beaming with a goofy smile, New Miles is reinvigorated at work and sees his wife with freshly appreciative eyes… and Old Miles resents him for it. The clone and the original eventually strike a deal, and the story takes some hilarious turns as their arrangement shifts from cooperative to adversarial.

For such an inventive premise, though, Living With Yourself (created by Daily Show alum Timothy Greenberg) doesn’t get as fully wacky as one might hope; it’s not as interested in exploring all the implications of its alternate world as, say, The Good Place is. It also feels a bit stretched thin at times: It doubles back a lot to tell the same events from a different perspective, which starts to get monotonous. (File this along with the many other streaming shows that would probably work better as a movie.) The comedic elements are consistently sharp and clever, but when it tries to get serious, it wobbles noticeably, and the supporting cast is too sparse. As Miles’ wife Kate, Irish comedian Aisling Bea isn’t given much to do beyond reacting to Miles’ antics, and Alia Shawkat pops up occasionally as Miles’ bohemian half-sister, but not often enough to make an impact. 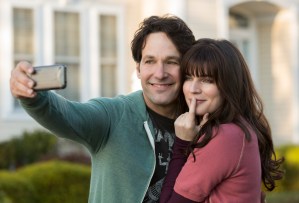 I’m not sure all of this would work nearly as well without Rudd at its center, honestly, but his innate charm helps hold those thin narrative strands together. We already know he’s a gifted comedic actor from his years in the Judd Apatow film universe, and he invests both Miles — Mileses? — with plenty of pathos, making both versions feel distinct. (You can tell them apart by their hair: New Miles is always flawlessly coiffed, while Old Miles’ hair is droopy and a bit sad.) It’s an incredibly entertaining dual performance that carries Living With Yourself… even when the show’s initial spark begins to fade.

THE TVLINE BOTTOM LINE: Paul Rudd is delightful (twice over) as a man at war with himself in Netflix’s surreal sci-fi comedy Living With Yourself.