The Flash had a quite literal “Yass Queen!’ moment in its Season 6 premiere, when Cisco cued up the theme from 1980’s Flash Gordon to score Barry’s fleeting trip into the cosmos.

Flash Gordon, of course, starred Sam J. Jones (in the title role), Melody Anderson, Topol and Max von Sydow (as Emperor Ming the Merciless) in a gloriously cheesy space opera — or, as Flash showrunner Eric Wallace regards it, “The masterpiece from my childhood.”

Setting the stage for the superfun needle drop, Barry was tasked with superspeeding into the latest black hole to appear within Central City, as the result of local science nerd Chester P. Runk (Friends With Benefits‘ Brandon McKnight) tinkering around with a powerful toy he had fashioned from junkyard finds. 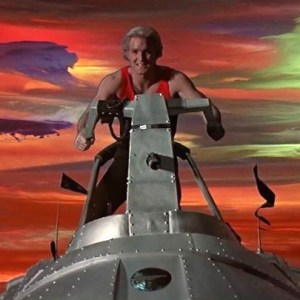 The fact is, had Cisco sampled only the iconic “Flash! Ah-ahhh!” lyric, it would have been a nifty rimshot to punctuate Barry’s out-of-this-world escapade. But no, we instead got a decent chunk of the song, as Barry raced into the black hole and did the shmience-y things that had to be done. “I used as much of it as we could, quite frankly,” says Wallace. “If I could afford it, we would have scored the entire episode to Queen music. But that’s a bit out of our budget.”

But hearing from pleased viewers will more than offset any licensing costs for the flashy tune. “I really hope the audience has a fun reaction,” Wallace says, “because I think it’s a fun moment.”