The Good Doctor this week will turn its attention to another good doctor: Antonia Thomas‘ Claire Browne. Monday’s episode (ABC, 10/9c) spends a day in the life of the third-year resident, who recently was chosen to be the first of Melendez’s protégés to lead a surgical procedure.

“[Executive producer David Shore and I] talked about it a little bit ahead of time — like, an episode ahead of time,” Antonia Thomas tells TVLine. “Well, maybe two episodes ahead of time, and he says, ‘You know, I have this idea.’ It was real exciting and real terrifying, because it felt like a big responsibility.” But Thomas was excited for the opportunity to delve deeper into Claire’s life at such an important moment in her journey. “I think it’s really cool for Claire as a resident to get this accolade to be the first [resident] to lead surgery. And as a bit of character development, it’s super fun to play.”

In the episode, Claire faces complications at home and at work as she prepares for a gallbladder removal. The patient is a teenage girl whose relationship with her mom (9-1-1‘s Tracie Thoms) and her siblings has started to wear on her. Soon enough, Claire takes notice and tries to help. 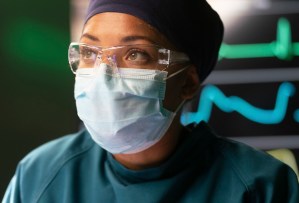 “Claire is such an empathetic person,” Thomas says. “She’s always trying to dig deep in terms of finding ways to connect, and I think— I don’t know that she necessarily sees a bit of herself [in this patient], but Claire is always trying to use her own experiences to empathize and help in whatever way that she can.”

Meanwhile, the doctor has her own set of familial issues, now that she has allowed Breeze (returning guest star Sharon Leal) to crash on her couch. “In the lead-up to her big surgery, that’s on her mind,” Thomas says. “With Claire’s mom, there’s a lot of guilt, a lot of worry and a lot of stress, so to have that kind of playing alongside this massive thing for her [is overwhelming]. She’s just trying to juggle the two… and as the day progresses, and the surgery progresses, that whole situation culminates in something a little bit shocking.”