Now that Spencer James has a state championship win under his belt, you’d probably expect him to ride the high of that football game for weeks, right?

* The CW drama ended its first season with a major cliffhanger: Who is the real father of Spencer’s younger brother, Dillon? Is it Corey, Spencer’s dad — or is it Billy Baker, with whom Spencer’s mom had a brief affair years ago? When Corey and Grace finally get some alone time to discuss this, Grace confesses that she doesn’t know who Dillon’s real father is. She was always afraid to broach that topic after her affair with Billy, and after Corey bailed on the family for eight years, she didn’t think he deserved an answer. Corey’s a little offended by this, but Grace insists that Spencer and Dillon are her boys, not his, and asks him to leave.

Later, after Grace and Corey’s tempers have cooled, they try once more to discuss Dillon’s paternity — and just when Grace agrees to get a test done, Corey counters that they should leave well enough alone. Back when Corey thought Grace knew who Dillon’s father was, it seemed like a necessary piece of information; now that he knows she’s in the dark, he doesn’t think it’d do any good to learn the truth. Corey loves Dillon regardless of their blood relation, and Dillon is under the blissfully ignorant impression that his biological father is back in his life. Why mess with that? Grace agrees, and it seems like a pleasant conclusion to this storyline.

But of course it isn’t. Even as Dillon’s paternity remains a question mark, the show introduces another mysterious family matter: At the end of the episode, Corey heads to the bus station and picks up a strapping young man, whose name and relationship to Corey aren’t revealed. “How was your ride up from Nevada?” Corey asks. “Long,” the anonymous visitor replies. “Man, thanks for convincing Mom to let me come stay with you.” They share a loving hug — and I have so many questions. 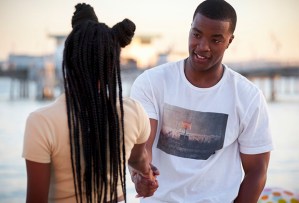 * Spencer continues to consider his dad’s offer to play football at South Crenshaw. At first, it seems like a no-brainer: How could he pass up the chance to come back home and play for his father? But Spencer spends the episode second-guessing that choice. For one thing, he’d be letting the Beverly High team down, just as they’re getting hyped up about the idea of winning back-to-back state championships.

Then there’s the arrival of Rochelle Moseley (played by Ambitions‘ Kayla Smith), a recent Beverly grad and aspiring female sports agent. Rochelle also has a Very Important Father, who’s one of the football team’s most influential boosters — and she really wants Spencer to meet her dad and establish a solid relationship with him. Even Layla points out that Spencer will be a Beverly High celebrity now that he’s won the championship, and he seems even more reluctant to back out and return to Crenshaw. At the end of the hour, he shoots his dad a text, informing Corey that he needs some more time to make his decision.

* In the wake of his separation from Laura, Coach Baker isn’t in a great place. He’s still living in Crenshaw (though his father, with whom he’d been crashing, has apparently relocated to Florida), he spends most nights getting sloshed at the local bar, and he keeps asking Grace James to give him rides home when he’s too drunk to drive. (To her credit, Grace eventually cuts off her chauffeur services and tells Billy to “boss up” and get his life together, as he’d planned to do when he first came back to Crenshaw.)

Also, remember that resignation letter that Billy left behind in the Season 1 finale? It turns out Olivia swiped it from his desk when she came to check on him the night of the championship game. She also wrote the Beverly High principal a convincing email, in which she pretended to be Billy asking for some extended vacation time. In other words, no one at Beverly currently knows that Billy bailed — and Spencer is disheartened to realize that Billy was just going to take off, without so much as a face-to-face conversation with the football team he was leaving behind. And he’s not the only one who’s frustrated: Olivia later confronts her father, tearfully begging him not to give up on his family (or on Beverly High) so easily.

* In order to give the Baker family their space, given everything they’re going through, Spencer has indefinitely moved back to Crenshaw. He still commutes to Beverly Hills every day, but he doesn’t technically live in the appropriate zip code for that school district anymore — and Spencer gets word from Rochelle that Beverly High has found out about this. In fact, the school is planning to do a random drop-by at the Bakers’ house soon, in order to check if Spencer is still living there. If they find out that he’s living in Crenshaw again, his entire football career — including his championship title — could be in jeopardy.

Nervous and frustrated, Spencer considers begging the Bakers to let him stay with them again. But Grace ends up handling the situation in her own way: She visits the Baker home and has an in-person conversation with Laura, genuinely apologizing for her affair with Billy and the impact it’s had on Laura’s family. At first, Laura appears to dismiss the apology. (“Are you done?” she coldly asks after Grace concludes her monologue.) But she really just needed time to process. A few hours later, Laura drops by Spencer’s house and tells him he can live with the Bakers anytime; after all, the fallout from Grace and Billy’s affair has nothing to do with Spencer, so why should he suffer? Spencer, visibly relieved, takes Laura up on her offer and moves back into the Baker house that night. (Olivia is especially thrilled by his return, and I have a sneaking suspicion she was the one who tipped off Beverly High about Spencer’s relocation to Crenshaw.) 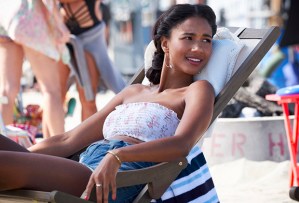 * Following her emotional breakdown after the championship game, Layla tries her best to convince Olivia that she’s fine. According to Layla, her dad is back in Beverly Hills, and the two of them have been spending so much time house-hunting that she hasn’t had time for friends or Spencer these last few weeks. Naturally, Olivia doesn’t buy it — and her instincts are correct. As we later learn, Layla’s dad has actually been in Tokyo this whole time, and Layla is living by herself in a very messy hotel room.

* Following Tyrone’s arrest, Coop has become a pariah on Crenshaw’s streets; even her former friends now view her as a snitch, and she arrives at her locker one morning to find an alarming death threat written on it. Coop tries to shrug it off, but girlfriend Patience is understandably spooked — and it turns out she should be, especially when she and Coop get cornered by a group of gang members after a candlelight vigil for the late rapper Nipsey Hussle. Fortunately, Coop’s friend Preach — who had previously told Coop to “stay your raggedy ass the hell away from me” — arrives at the last second and breaks up the confrontation, telling the men to leave Coop alone for good.

With that, I turn it over to you. What did you think of All American‘s return? Grade the Season 2 premiere in our poll below, then drop a comment with your full reviews.