Another familiar (and very welcome) face is about to touch down in Roswell, New Mexico. As announced Sunday during the show’s panel at New York Comic Con, Jason Behr — who starred as Max Evans in the original TV adaptation of Melinda Metz’s Roswell High books — will recur in the upcoming second season of The CW drama.

“We’re very excited that Jason will be joining us for a multi-episode arc,” executive producer Carina Adly MacKenzie said in a statement. “It’s only fitting that he’s playing a (currently top secret) character with deep ties to Roswell, New Mexico’s history. Working with him has already been such a special experience for all of us, particularly when [Roswell co-star] Shiri Appleby was on set to direct him. I was such a huge fan of Roswell as a kid, so having their stamp of approval –– not to mention their expertise and advice –– has really meant the world to me, the cast and the crew.” 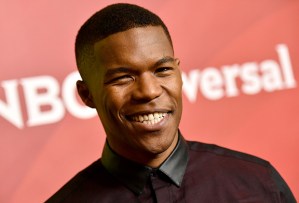 But wait, there’s more: Gaius Charles, best known for playing Smash Williams on Friday Night Lights, will also recur in Season 2 as Bronson, “a local farmer with a strong moral compass that leads him to see the good in people — and aliens — in a time of great prejudice. Ultimately, his quest to protect those he loves pits him against forces far more powerful than he is.”

Added executive producer Chris Hollier, “When we were looking at a way to instantly have our audience be invested in a 1947 storyline, we couldn’t think of a better actor than Gaius Charles to create a character to hook into. We feel so lucky that he agreed to come help us tell this lyrical story within a story.”

Roswell, New Mexico returns midseason on The CW. Your thoughts on the show’s new additions? Hopes for Season 2 in general? Whatever’s on your mind, drop it in a comment below.