The holidays are here as Mr. Robot kicks off its fourth and final season… by killing off a major character before the opening credits even roll.

We pick up with Angela ranting to Phillip Price about how she wants “retribution” against Whiterose; Price tries to calm her down, but she tells him there’s nothing he can do to stop her. “I wish you hadn’t said that,” he sighs as he walks away with gritted teeth — and a pair of Dark Army goons walk up and shoot Angela in the head. (Welcome back, Mr. Robot fans!) Now it’s Price who’s pissed at Whiterose, calling her “psychotic” in a phone call, but Whiterose is unmoved: “I’m sorry for your loss.” An assistant informs her that the shipment hack will give them the clearance they need “just in time for the holidays,” and Whiterose announces she’ll happily “terminate” Elliot once the project is finalized. “I hope you enjoy your last Christmas, dear Elliot,” she laughs. 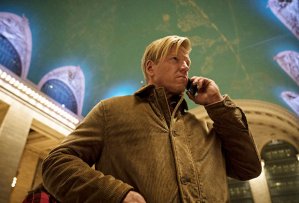 Before we check in with Elliot, though, we meet sleazy lawyer Freddy Lomax, whose office holiday party is interrupted when he receives an envelope containing video of him propositioning a clearly underage girl via webcam. A burner phone rings: It’s Mr. Robot, instructing Freddy to follow his instructions if he doesn’t want that video to go to the FBI. Freddy dutifully copies all of his work emails, heads to Grand Central, loses a couple of Dark Army henchmen and boards a train… where Elliot is waiting. Freddy’s been helping Whiterose funnel money, and Elliot digs up some wire transfers in his work emails, along with the name Cyprus National Bank. Elliot also gets the name of another contact from Freddy — John Garcin — but when Freddy realizes Elliot can’t do anything to protect him from Whiterose, he pulls out a gun and shoots himself on a city street. (Boy, the body count in this episode is climbing fast, huh?)

We check in on Tyrell, who’s being lauded as a savior at E Corp, now that the Five/Nine hack has been reversed and the company is bouncing back. But he’s nearly catatonic, still haunted by his ordeal last season. Dom isn’t doing much better: She’s drinking heavily and crashing in her mom’s attic, pulling a pistol on a poor handyman in a fit of paranoia. Meanwhile, Elliot and Mr. Robot set up shop in Allsafe’s abandoned offices, combing through John Garcin’s social media for blackmail material. Elliot is uncharacteristically cold, though: When Mr. Robot mentions Freddy’s fate, Elliot sniffs, “He had it coming. They all do.” He wants vengeance for what happened to Angela, and is singularly focused on bringing down Whiterose, once and for all. 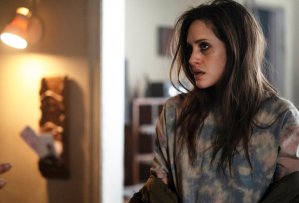 He gets a visit from a coked-up Darlene, who is convinced she saw Angela alive on a city street, but Elliot abruptly cuts her off: “She’s f—king dead.” (He actually has a photo from Whiterose of Angela with her brains blown out, but he doesn’t want to show it to Darlene.) Elliot directs his fury at John Garcin, posing as a deliveryman and sneaking into Garcin’s apartment. The apartment door is left open, though, and the home furnishings inside still have price tags on them. It’s a set-up, Elliot realizes, as he pulls a copy of Sartre’s No Exit off of a bookshelf and sees a Garcin in the character name list: “There is no John Garcin.” Right on cue, a couple of thugs enter and pull Elliot out kicking and screaming.

Dom’s paranoia might not have been misplaced, either: During an awkward dinner with her mother and a woman named Janice, she thinks it’s her mom’s attempt at matchmaking, but then Janice ominously notes, “You have that interview about the Santiago case in the morning.” Yep, Janice is a Dark Army mole… and if Dom doesn’t cooperate, she’ll be “forced to do something really bad to your mother.” Darlene is still in an Angela grief spiral, screaming at friends at a party who dare to touch Angela’s things and sobbing in Angela’s bed while clutching her old ballet slippers. And Elliot is strapped down to a chair by those thugs while a mystery man — hey, it’s Mr. Robot creator Sam Esmail! — cooks up a drug and loads it into a syringe.

Elliot pleads for them to let him go (“I’ve hurt so many people. I have to make this right”) and threatens to spoil Whiterose’s entire operation, but it’s no use. “Goodbye, friend,” the mystery man says as he jabs the needle into Elliot’s arm. The thugs leave as a dazed Elliot collapses to the floor. His life flashes before his eyes, and his eyes flutter closed as we fade to black… but no, he’s not yet another casualty. He’s revived with something sprayed into his nostrils and awakes to see the thugs… joined by Phillip Price. “Welcome back, Mr. Alderson,” the old man says. Now this is a team-up we wouldn’t have predicted.

Alright, Mr. Robot fans, it’s your turn: Give the Season 4 premiere a grade in our poll below, and then hit the comments with your predictions for the final season.