One of Manifest‘s Flight 828 passengers almost got to share their reaction to the fact that Donald Trump had been elected president of the United States during Flight 828’s five year-plus disappearance.

On Sunday at New York Comic Con, before I as moderator turned the Manifest Season 2 panel over to audience questions, I conducted a “pop quiz,” asking several cast members if their characters were around for certain real-world events, or if they “missed” them during their “lost” time.

For example, young Jack Messina guessed right that Cal did not miss the premiere of the first Avengers movie (which came out a year prior to Flight 828’s April 7, 2013 departure), while Melissa Roxburgh admitted that, living as she does in a bit of a pop culture vacuum, she didn’t know if Michaela got to see John Travolta introduce “Adele Dazeem” at the Oscars. (Answer: Mick didn’t.)

I then asked Josh Dallas if Ben was around for Donald Trump officially announcing his candidacy for president, and he answered, “Absolutely not” — which is correct; it happened in June 2015. Showrunner Jeff Rake then jumped in to share, on a related note, that in an early Season 1 scene, Saanvi (played by Parveen Kaur) got wind that Trump was now POTUS and had a “Whaaaaat?”-level reaction.

That nod to the very real world, however, wound up not being filmed, Rake said. 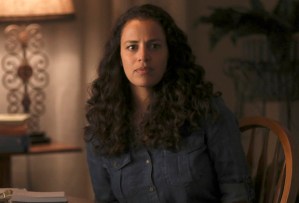 As for what will happen on the supernatural-tinged drama when Season 2 touches down in Spring 2020:

Dallas said that, despite learning that the passengers have a death/expiration date of June 2, 2024, Ben for one is “not going to fully accept that it’s something he can’t find a way out of. He puts a burden on himself to find an answer to the death date, and what happened to the flight.”

On the romantic front, Rake said that Ben and wife Grace (who is quite possibly pregnant by ex-lover Danny) “become even closer in a way that we can’t even talk about yet.” As for those who ‘ship Ben with Saanvi, Dallas acknowledged that the brainiacs do have some “special” moments — at which point Athena Karkanis amusingly interjected, “Not that special!” But as Dallas observed, “What’s beautiful about this relationship is that wherever it goes, it shows a true friendship between a man and a woman.”

To deal with her anxiety, Saanvi of course started seeing a shrink, Dr. Ragier, in the Season 1 finale — and said therapist is actually the nefarious Major. Rake promised a “tantalizing” twist to the ladies’ dynamic in Episode 4.

Luna Blaise confirmed that Olive is headed for an “emotional roller coaster,” still “fixing the relationship that I have with my dad” as well as getting pulled into new kinds of drama. As Rake explained, a church has formed around the Believers and their deification of the Flight 828 passengers, and “Olive drinks a little of that Kool-Aid.”

Though Mick’s ex-fiance Jared was completely MIA from the Season 2 sizzle reel and Zeke was only glimpsed during what looks like a dream/nightmare sequence, both J.R. Ramirez and Matt Long were on hand for the panel. Forbidden from discussing who got shot during the season-ending fight over Zeke’s gun, the gents instead took turns “spoiling” one another’s “deaths.”

Though ever the hero, Ben will make some “dark decisions” in Episode 5.

“What happened?” — namely, how and why the passengers (as well as Zeke and the freshly deceased James Griffin) skipped through time — is a series-long question, Rake said. Though “by the time we get to the end of Season 2, you’ll understand a lot more than you do right now.”