If you’re going to do right by DC Comics’ “Crisis on Infinite Earths” saga, you need the Monitor, yes. But you also need a Harbinger at his side. And now, it has been confirmed that Lyla Michaels, a character who has been played on Arrow over the years by Audrey Marie Anderson, will fill that role in the Arrowverse‘s next, five-part crossover.

We say “confirmed” because while it did seem that Oliver Queen, in fulfilling his deal with the Monitor, might serve as an ersatz Harbinger, the fact is that in the comic books Lyla Michaels became Harbinger, and the Arrow character has used that codename since Season 1.

You can get a look at Anderson’s full costume here; Arrowverse EP Marc Guggenheim said they explored the idea of a comics-accurate helmet but it “didn’t look right.”

In “Crisis” lore, Lyla was an orphan raised by the Monitor, and as an adult she assisted him in identifying and grooming heroes and villains to team up and hopefully fend off the titular, universe-destroying event. She adopted the name Harbinger after being energized with the power to create doppelgangers.

Previewing the Arrowverse crossover’s take on “Crisis on Infinite Earths,” The Flash showrunner Eric Wallace told TVLine, “When you see who’s playing some of the major characters – like Pariah, who we’ve already announced is Tom Cavanagh — there is a reason why Tom Cavanagh is Pariah. It’s not coincidence, and you need to watch this season of The Flash to understand that.

“Same thing with the person who ends up being Harbinger,” Wallace continued. “It will make so much sense to you, you will go, ‘How did I not see that coming?'”

“We are trying to pay off as many things as possible,” Wallace said. “We’re trying to honor some things we hope people will notice and enjoy.” 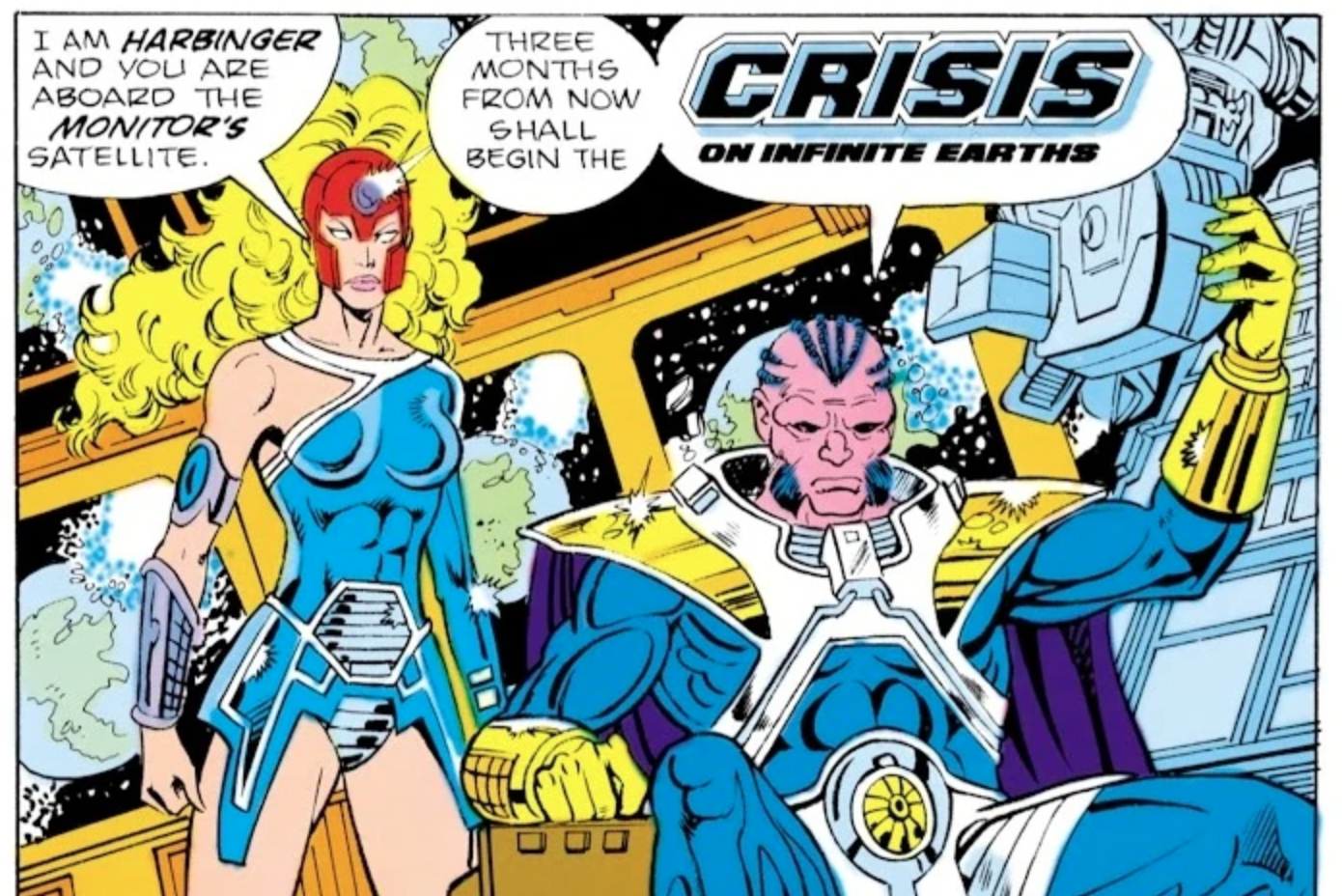 Harbinger with the Monitor (Courtesy of DC Comics)

As Arrowverse EP Marc Guggenheim said in a statement to Comicbook.com, “Lyla Michaels as Harbinger is a key component of the original ‘Crisis on Infinite Earths’ that we were determined to honor in our crossover.”

It is unclear if Arrow‘s own Lyla (as in Diggle’s wife/A.R.G.U.S. boss) will serve as Harbinger, or if it’s another Earth’s version of the character.

“Crisis on Infinite Earths” kicks off Sunday, Dec. 8 with an episode of The CW’s Supergirl, then continues with a Monday episode of Batwoman and that Tuesday’s The Flash. After a month-long holiday break, it concludes with the Jan. 14 episode of Arrow and a special installment of Legends of Tomorrow (which premieres at midseason).