As if Mr. Jingles and the Night Stalker weren’t enough to contend with, Wednesday’s AHS: 1984 revealed another pair of troublemakers lurking at Camp Redwood.

First, it turns out that “Nurse Rita” is actually Donna Chambers, a psychologist who helped Mr. Jingles (aka Benjamin Richter) escape in order to study him in his natural habitat, the site of his infamous 1970 killing spree. You see, Donna doesn’t believe that anyone is necessarily born evil. She admits that everyone has the capacity to do good or bad things, but that the urge to murder “needs to be activated by outside circumstances.” She also subscribes to the Ted Bundy philosophy that pornography has sullied men’s minds, causing them to objectify women to a dangerous — even deadly — extent. Benjamin, meanwhile, blames his killer instinct on all the high-fructose corn syrup he’s consumed.

(Side note: Do we really think that Donna sat down with all of the serial killers she mentioned, including Bundy, John Wayne Gacy, William Bonin, Patrick Kearney and Robert “the Butcher Baker” Hansen? I’m having a hard time gauging how full of crap she is.)

The real Nurse Rita, an Ashley Benson look-alike if ever there was one, spent days bound and gagged under a tarp at Camp Redwood until some of the counselors discovered her this week while hiding from Mr. Jingles. Terrified and confused, she made a desperate attempt to flee, but couldn’t even exit the cabin before Mr. Jingles impaled her through the head with a splintered oar. 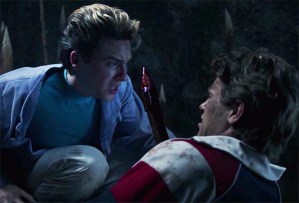 Meanwhile, Chet and Ray’s escape took a major detour when they tumbled into a ditch, where poor hot Chet was impaled through the chest by a big-ass spike. With their collective demise seemingly imminent, a panicked Ray confessed his darkest secret: During his junior year of college, he witnessed the accidental death of a pledge during Hell Week. Rather than face potential consequences, Ray opted to put the pledge back into his car and push it over a ledge. It was a solid, if completely amoral, plan… until Ray realized that the pledge was still alive! Unfortunately, it was too late to stop the pledge from rolling down the hill to his death. And just when you didn’t think Ray could be any more of a garbage person, he climbed out of the ditch and left poor hot Chet for dead.

Fear not, though — Xavier and Trevor eventually stumbled upon poor hot Chet and rescued him from certain doom, taking down one of Mr. Jingle’s bumbling copycats in the process. (“His knife against these guns!” was a hell of a way to rush into that battle. I salute Trevor.)

Now, for the week’s biggest twist: Ray and Montana encountered the Night Stalker in the parking lot, but rather than helping her fight, Ray took off on a motorcycle… and was promptly beheaded by Mr. Jingles. (R.I.P., you untrustworthy garbage person!) Back in the parking lot, Montana and Richard started… making out?! The episode ended with Montana staring him down, asking, “Why haven’t you killed her yet?” and everything we’ve ever known is a lie.

Time to discuss: Were you expecting Ray to be the season’s first (counselor) victim? And what do you make of Montana and Richard’s bizarre exchange? Drop a comment with all of your thoughts and theories below.