Arrow has huge plans for its farewell run… though series star Stephen Amell may be a bit hesitant to admit it.

When asked about the “humongous” teases made by producers at the CW series’ final Television Critics Association press tour panel, Amell sarcastically quipped to TVLine shortly afterward, “Well, that’d be the first time a showrunner had said, ‘It’s huge.'” And yet, just minutes later, while previewing Season 8’s action-packed start, Amell had to chuckle at himself before letting these words slip: “I can’t believe I’m about to say this, but… the first two episodes are huge.”

With Arrow‘s final, 10-episode season set to kick off on Tuesday, Oct. 15 (airing at 9/8c, after The Flash), here is what else Amell had to share about his reversed decision to hang up his bow sooner; how the drive to see Felicity again will push Oliver through his pre-Crisis mission; and what the Arrowverse at large means to him, as he readies to walk away…. 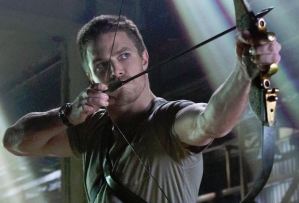 TVLINE | For starters, can you clarify when you thought that you’d be done with Arrow after Season 7, and when you decided to come back for 10 more episodes?
I decided midway through Season 6 — basically over the Christmas break — that it was time to be done, and I broached that subject with [Arrowverse overlord] Greg [Berlanti]. He and and I talked for about a month before he formally notified [CW president] Mark [Pedowitz] and [WBTV president] Peter Roth, because he was like, “Think about this a lot, let’s talk about it, because once I kick it up the chain, once the ball starts rolling….” So I thought about it then. I assumed that [the series] was going to end at the end of 7, but Greg’s smarter than me, and he had a really good idea about a limited run in Season 8.

TVLINE | So at the time that you filmed last year’s “Elseworlds” crossover, when you saw that end card promising “Crisis on Infinite Earths,” did you know you would be back for the 10 episodes?
Oh yeah, yeah, yeah. I knew that I was going to be back for 10 episodes of Season 8 before we started Season 7.

TVLINE | Was Emily [Bett Rickards]’s decision to leave at the end of Season 7 informed by your own thinking at the time?
Nope. Nope. Emily was a guest [star] in Season 1, and then she signed a six-year contract that ran through Season 7. She nailed it, and then she was done.

TVLINE | She wasn’t thinking, “Well, Stephen is probably gone anyway at the end of 7, so…”?
No, no. Frankly, from my perspective I really would have preferred that she stayed until the end, but from a professional standpoint, as one of her best friends… I get it.

TVLINE | I’ve said this to everybody over the years, to Mark [Pedowtiz], to Peter [Roth]…. You’ve been a tremendous ambassador for the show. You know how to tease what’s ahead without giving things away. Like, “Oliver does a thing 12 seconds into Episode 7 that will cause a reaction from someone….”
But you know that I give out spoilers all the time; I just don’t tell people that they’re spoilers. Like, I say things that are definitive plot points and it just goes [makes whooshing sound over head]. [Laughs] I love it, it’s my favorite thing.

TVLINE | You also can quote chapter-and-verse when arguing a point, like, “Such-and-such happened in the second scene of the third act of 518, and that’s why Oliver shouldn’t be saying this now.”
Right. Right. So, I get a reputation sometimes as being little demonstrative on set. That’s not what it is. It’s just, if you’re going to come to me for an idea, you better know exactly what you’re f–king talking about. Because if it doesn’t add up, I’ll have an issue with it. 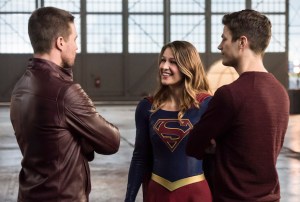 TVLINE | What sort of growth is left for Oliver over these 10 episodes?
We’re going to try to develop a sense of humor for him — in the nick of time. [Laughs] 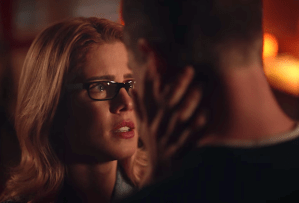 TVLINE | What’s driving him right now?
Two things: One, he believes the Monitor, because Kara and Barry were going to die and the Monitor gave him [an alternative]. And secondarily, he believes Felicity when she says, “Whatever happens, I’ll find you.” He believes her. There’s a great exchange in [this season’s] Episode 2, between me and Rila Fukushima, who plays Tatsu, where she says, “You’re being driven by anger,” and he goes, “I’m not angry.” Because he’s not. He’s simply doing what has to be done. In a lot of ways, he was driven by anger in those earlier seasons; not so much this year. He’s just making good on the deal he made. He made a deal. He saved Barry, saved Kara…. [Sheepishly] I’m bummed out that he lied to Barry about making a deal.

TVLINE | What sort of conflicts will Oliver get into on a weekly basis, during this final run? The producers [at TCA] were talking about “humongous” events in each episode.
[Sarcastically] Well, yeah, that’d be the first time a showrunner had said, “It’s huge.” [Laughs] Oliver is doing the Monitor’s bidding. Both the first and the second episode are based around a specific task that the Monitor has given him. In both episodes he has to retrieve something.

TVLINE | But there will be opportunities for close quarters combat?
Oh yes. Yes, yes, yes. [Laughs] I can’t believe I’m about to say this, but… the first two episode are huge. [Laughs]

TVLINE | And lastly, what is one thing that, to this day, you can’t believe you got to do during your time on Arrow?
Meet Superman (played by Supergirl’s Tyler Hoechlin). You know, it was scripted in the crossover that when Oliver sees Clark for the first time (photo above), he puffs out his chest. It was scripted, “Barry goes to Oliver, ‘Are you puffing out your chest?’ and Oliver [scoffs] ‘No.'” But that’s not what I said! Barry goes, “Are you puffing out your chest?” and I go “Yes.” I was thinking that they were going come from behind village and say, “Just give us one where you’re saying ‘No,'” and I was prepared to tell them to f–k off. [Laughs] But no, that was cool.