Warning: The following contains spoilers for Sunday’s series finale of Preacher. If you’d rather watch first, read later, for heaven’s sake, move on.

Though Preacher’s series finale was titled “End of the World,” Sunday’s episode didn’t actually turn out to be all that apocalyptic. Yes, characters were killed right and left — and the ones we really cared about had all joined the dearly departed by the time the epilogue was over — but doomsday, it wasn’t. Read on, and we’ll not only review how disaster was averted, we’ll discuss who got served their just desserts and who got to live happily ever after… at least until that 40-year flash-forward. 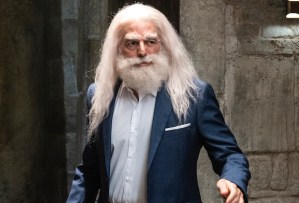 ‘IF HUMPERDOO LIVES, EVERYONE DIES’ | Though Cassidy assured Humperdoo that he looked “like a dead ringer for Gene Kelly… if he’d been struck by lightning,” the messiah, knowing his tapdancing would set in motion The End, was reluctant to take the stage at the Apocalypse Revue. When Tulip arrived on the scene, she and Cass fought — and I mean brutally, physically fought — over whether to save the world by killing Humperdoo. (Their battle was juxtaposed in stylish-as-hell fashion with Jesse and the Saint’s, and Hitler and Jesus’, brawls.) In the end, Cass reluctantly agreed with Tulip, and with the messiah’s blessing — urging, even — put a bullet in his head.

Meanwhile, Featherstone, having been wholly disillusioned by Starr — and having failed in her suicide attempt — trained a gun on her boss/lover. But, before she could pull the trigger, he distracted her with just enough sweet talk to allow him get the drop on her. (RIP, Flufferman.) At the same time, the Saint defeated Genesis’ parents, and at last got Jesse exactly where for so long he’d wanted him. But when the preacher asked if one last kill was really what the cowboy wanted, he instead allowed Jesse to kill him. (There was more to it than that, but we wouldn’t find that out until later.) After Jesus throttled Hitler and turned down God’s offer to be the new messiah, the Almighty hopped on his motorcycle and fled. Not that Jesse was gonna let Him get away that easily. After telling the crowd at the Revue that he was done searching for God, he used Genesis to assign them all that task. 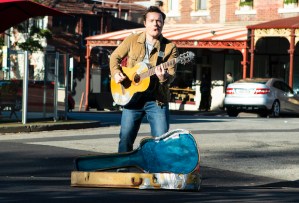 ‘THE THREE OF US SAVED THE WORLD IN, LIKE, AN ACTUAL SENSE’ | After we saw Eugene reject a plastic surgeon’s attempt to assist him in suicide — Arseface became a punk-rockin’ busker instead — and Jesse, Cass and Tulip took a moment to marvel at the magnitude of what they’d done, we flashed forward by two years. In that time, Jesse and Tulip had moved to Texas, where they were raising a baby girl and hearing now and again from Cass. (“Apparently, he threw up with Woody Harrelson.” We’d have expected nothing less.) The couple’s blissful existence was soon shattered by a phone call: God had been found. So Jesse took off for a long-overdue showdown with the Almighty at the Alamo.

After establishing that he could use Genesis on God, Jesse sat down with the Big Kahuna to ask his questions, the most important of which was, “Is my dad in heaven?” And yes, despite Jesse’s fervent prayer that his father burn in hell, God had sent him to heaven instead. That, He said, “was an expression of my love. I love you, Jesse Custer.” Now, He wanted Jesse to say it back. And just like that, Jesse got it. “Your great design is being loved, right?” he said. “That’s the why” of it all. Look, God replied. Just say the words, and He’d go back to heaven. Nope. Jesse reckoned “that we would all be better off without a needy little bitch like you around.” So he used Genesis to throw God around a bit, then ordered Him to stay the hell out of heaven. He even released Genesis. Why? “I don’t f—in’ need it,” said Jesse, throwing one last punch. When the Almighty threatened him, you know, almightily, Jesse scoffed. “Still won’t make me love you.” Take that! 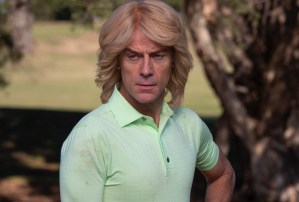 ‘WHAT IF I CHOOSE… HATE?’ | Later, we learned that Jesus was stuck in purgatory. Well, not literally, but he was working in customer service at a Home Depot type store, so same diff. Starr appeared to be living large, working on his golf game and tossing in the sand trap the Pensacola cops who tried to arrest him. Eventually, God returned to his throne, only to find the Saint waiting for him. He’d avoided hell, you see, by making a deathbed confession to Jesse. Offering to return the cowboy’s family to him, the Almighty pleaded, “Let me give you an eternity of love.” Opting for hate instead, the Saint put a bullet in God’s head and made himself comfy in His throne. Finally, as Jesse and Tulip enjoyed a John Wayne movie at the drive-in, we glimpsed Genesis flying by in the night sky.

From there, we zoomed forward four decades to find Cassidy making an appearance at the tail end of Jesse’s funeral, when only his and Tulip’s daughter (and her kids) were around. Thanks to the gravestones, we learned that the lovers had died only a year apart. And thanks to their grown daughter (a bewigged Ruth Negga), we learned that they’d never stopped talking about Cassidy, who, in all those years, hadn’t visited. Where was he off to next? “Someplace new,” he told her. And, with that, he turned and walked into the sun, eschewing his umbrella to burn up. And that, Preacher fans, was that. What did you think of the finale? Grade it in the poll below, then hit the comments with your reviews.