The NCIS: Los Angeles team had its hands full as Season 11 opened on Sunday night, cleaning up the mess created in the May finale, in which a “false flag” war in the Middle East was set in motion….

For one, there was the situation aboard the Allegiance, where ISIS mole Skinner had locked himself inside the Damage Control Center and started killing the crew members who were with him. After exploring multiple options, Sam and Callen quietly drilled a hole in the floor outside the room to snake in a camera and scout out the sitch inside. They then pumped in knockout gas, and dragged Skinner out for interrogation. The zealot, however, would reveal nothing, other than to warn Harm, “The great jihad has commenced. I’ve trained my mind and am prepared. Are you?”

Mac and Hetty, meanwhile, hopped a flight to the hot-bed region with Fatima. While Hetty clocked in some flying hours from the cockpit, Fatima picked Mac’s brain about applying for a post in D.C. Talk of the local dating pool led to Fatima assuming Mac was with… someone, meaning Harm. “No, I’m not. Not right now,” Mac hedged. “We were engaged, but… life got complicated,” to a degree that it’s been nine years since they last saw each other in person. 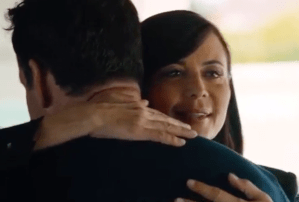 When Hetty’s jet touched down, she, Mac and Fatima met up with Sam, Callen and Harm — and everyone quickly skedaddled as Mac and Harm laid eyes on each other, in the flesh, for the first time in a long time. Harm awkwardly offered his hand for Mac to shake, but she instead pulled him in for a very warm hug.

Sam and Fatima were tasked with contacting Laleh, a store clerk in Tehran who might be able to get the awaited proof of a false flag to the right people who could call off any retaliatory strike. Callen and Harm did same in Tel Aviv with Eliana, a badass beauty with whom Callen has a past, while Mac and Hetty sought an audience with Deputy Crown Prince Kamal of Saudi Arabia.

But what about that proof, eh…?

Kensi, Deeks, Sabatino and Wallace fended off a first wave of attackers at their CIA bunker in Iraq. Kensi then played sniper from a rooftop perch to take out a second group. A third wave was lured inside the shed, where a remote machine gun turret awaited them, while Kensi, Deeks et al slipped out a bottom hatch. When the machine gun ran empty and the baddies entered the shed, the place blew to bits while the good guys scampered away.

Following sets of ATV tracks, Kensi and Deeks’ crew happened upon a couple of truffle farmers who had found journalist Alexandra Duvivier and Chechen defector Muhammad Pliyev dehydrated in the heat. The “Patagonia models” gave the strangers water and an ATV with about five miles’ worth of gas. Densi & Co. caught up to Duvivier and Pliyev as they were about to be executed roadside by ISIS, and neutralized the threat. Wallace got the false flag proof from Pliyev and rushed it out via an uplink, and in a montage we saw all interested parties receive the war-preventing intel.

At a celebratory dinner in a closed-off restaurant in Riyadh, Mac and Harm found some alone time over virgin mojitos. “It’s been nine years, Harm…. Why?” wondered Mac. Harm started to suggest that it was because she was happy in D.C., while he had his ship, yada yada, but…. “That’s not why. We’re scared,” Mac suggested. “We never gave it a shot, a real try, because we were scared to.

“Don’t worry, I’m not asking you to be with me…. I just want us to acknowledge why we’re here tonight as colleagues, and not husband and wife,” Mac continued. After some awkward silence, Harm shared that Hetty suggested he put in for a leadership role at NCIS, either in San Diego (I smell spinoff!) or with the Contingency Response Team (I taste spinoff!!). “Mac, what are we doing…?,” Harm asked, resuming the topic from earlier. “I don’t know,” she answered. “But we’re way past letting fate decide.” And damn, she is right.

With that question left lingering in the air, we cut to Hetty with Callen and Sam in the main dining room, where she looks at the celebratory crowd and remarks on missing seeing “the wonderful family that you’ve all become.” Hetty then drops the none-too-small news that tomorrow, while everyone else heads back to the States, Sam and Callen will be staying behind, for a not-official don’t-call-it-an-assignment….