Has the Almighty ghosted Miles? That appears to be the case in God Friended Me‘s Season 2 premiere, as the podcaster hasn’t gotten a friend suggestion since Joy (Awkward‘s Jessica Lu) showed up and then bailed after learning all about the God account. Miles hasn’t been able to find her since then, and in the meantime, he’s scrambling with a storyline for Season 2 of The Millennial Prophet.

Rakesh suggests to Miles that maybe it’s time to move on from the God account, but the universe has other plans. After helping a soldier (Sleepy Hollow‘s Zach Appelman) with directions, Miles is led to a coffee shop, where he runs into Joy. She is still reluctant to participate and accuses the God account of being a “cyber terrorist” who won’t leave her alone. Miles tells her that if they just help her new friend suggestion — Freemont the soldier — then they can both get their lives back, so she acquiesces. They track down the soldier to a bar, then follow him to the cemetery, before eventually learning that he has a treatable heart condition. Freemont insists he’s going back to Iraq, but if he does, it could kill him, his doctor warns. Even Freemont’s army pal knows he can’t talk his friend out of leaving active duty — but there is someone who might be able to: Rose, the civilian pen pal that Freemont fell in love with. It was her brother’s grave that Freemont was visiting.

Miles and Joy catch up with Freemont in Times Square to talk some sense into him, when all the power suddenly goes out. The jumbotrons are then replaced by video of Freemont and Miles… and Rose, who was passing through and saw Freemont on the screens! Freemont tells her he wants to start a new life with her, and they happily kiss for the first time as the crowd coos.

The high of it all inspires Joy to tell Miles the truth about why she moved to New York. She didn’t burn out as a public defender; she came to the city to find the daughter she gave up for adoption as a teenager. And back at home, Miles finally gets a message from the God account: “Follow the Lady. Find Your Path.” 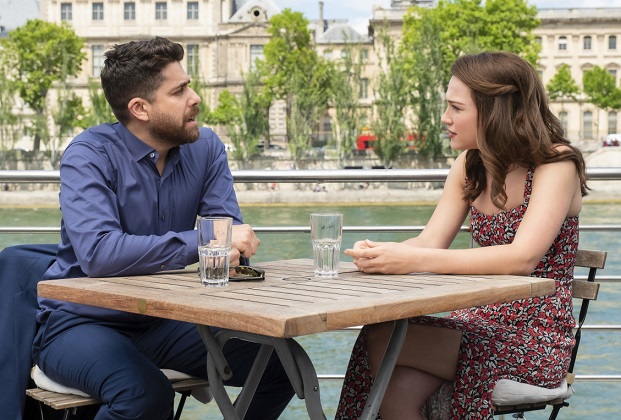 Meanwhile, in Paris, Cara asks Simon for help tracking down Annie Keller (The Americans‘ Susan Misner), an old friend of her mom’s who inspired Cara to become a journalist and told her that her mom was in New York, prompting Cara to move there. Simon later admits that he knows who Annie is because he discredited her when she tried to write a story about the Juliet code. When Cara visits Annie, the latter is understandably angry to learn that Cara is writing a book about the man who ruined her life. After some time, though, Cara and Annie make amends, leading to a big revelation: Annie didn’t send the Facebook message to Cara about her mom. It seems the God account has been pulling the strings for much longer than they’ve known, and it now wants her in Paris for something bigger, Cara tells to Simon.

Elsewhere, Arthur and Trish’s wedding is just six weeks away, but he isn’t ready to leave his home and buy a new one. It takes Miles reminding him that he can take his memories with him for Arthur to buy up a nice property.

God Friended Me fans, what did you think of the season premiere? Grade it below, then hit the comments!