The Transparent clan said goodbye to their “moppa” in the series finale wrap-up movie and said hello to a new chapter of their lives — in song!

Yes, the “Transparent Musicale Finale,” as it’s officially titled, sees the Pfefferman family break into song as they mourn the sudden death of transgender matriarch Maura — played by fired star Jeffrey Tambor. The finale addresses the elephant in the room right away, opening with Maura’s friend Davina discovering Maura’s dead body (we never actually see Maura in the flesh) and informing her ex-wife Shelly and kids Sarah, Josh and Ali. Actually, Ali is now Ari, identifying as non-binary, and Josh is in group therapy for his love and sex addiction. But Shelly can’t figure out how to turn off the flashlight on her iPhone… so some things never change.

At the funeral home, Josh balks at the idea of bringing in his ex Raquel to act as the rabbi at Maura’s memorial service, before he and his siblings start cleaning out their “moppa’s” house, getting stoned and piling into bed together. Shelly copes with her grief quite differently, though: Inspired by a vision of herself and Maura as young ballerinas, she decides to write a musical based on her family, with a local improv comedy group standing in for her kids. (Ari’s bald, towering weed dealer — sorry, “healer” — Ava makes a great Maura, actually.) But the Pfefferman kids get a shock when Maura’s will reveals — as sung by a lawyer played by Richard Kind — that she actually left the family house to Davina, not them. Sorry, kids! 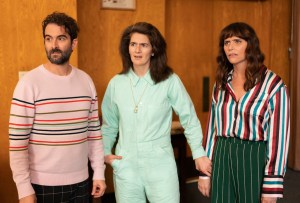 They track down Raquel at a Jewish summer camp, where she’s serving as chaplain, and she’s hesitant to come back into the Pfefferman fold, too. She does don some short shorts, though, to sing to them that they “can’t run away from [their] sadness.” They get even sadder when they walk in on Shelly rehearsing her show, and Sarah sings to her mom about setting healthy boundaries while the Pfeffermans face off against their fictional doppelgangers. But Shelly counters with her own song about the impossible challenges of motherhood: “Your Boundary Is My Trigger,” which turns into an elaborately staged dance number. (Side note: Judith Light’s still got it, huh?)

The kids say goodbye to Maura by literally putting her body into the cremation oven — should family members really be doing that? — and Ari says goodbye by ingesting a liquid psychedelic and envisioning a Brady Bunch-style take on their childhood, complete with blaring laugh track. Ari does make peace with their “moppa,” though, who encourages Ari to follow their dream of becoming a rabbi. At the funeral, we reunite with a number of Transparent favorites — including Melora Hardin’s Tammy and Cherry Jones’ Leslie — and luckily, the absent-minded rabbi (who keeps calling them the “Peppermans”) is cut off by Davina and a chorus of LGBTQ youth singing a beautiful, life-affirming tune. 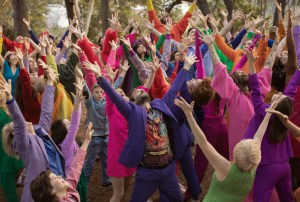 Life does go on, after all: A wobbly Shelly is reassured by Ava that she was actually a great wife and mom, and she tells her kids she’s cancelling her play. “It’s not important. You are,” she says, before a tearful series of hugs. Plus, they realize it’s the anniversary of Ari’s cancelled bat mitzvah, so they throw Ari an impromptu “bart mitzvah,” with Josh running to Raquel to retrieve a Torah — and reignite their romance with a duet about how they’re both crazy… and crazy about each other. Ari is newly christened in the Jewish faith, and Shelly sings about how “We Need a Joy-ocaust” to counter the Jews’ gloomy history. They all don colorful clothes and frolic in the woods… and yes, they’re aware they’re being a bit irreverent. They even sing, “F—k yeah, we’re crossing the line!” Farewell, Pfeffermans: You certainly went out in style.

It’s time to pay your respects, Transparent fans: Grade the series finale in our poll, and then hit the comments to share your thoughts.