CBS’ The Unicorn introduced us to a different kind of a magical creature on Thursday.

The new comedy stars Walton Goggins (Justified) as Wade, a widowed father of two daughters who is still living off neighbors’ frozen lasagnas and casseroles nearly a year after his wife’s death. His married friends — Michaela Watkins (Casual) and Rob Corddry (Ballers) play one pair, while Omar Miller (Ballers) and Maya Lynne Robinson (The Conners) make up the other — are concerned that Wade has let himself and his life go. Then there’s also the worrisome way that Wade seems to be completely oblivious to the fact that Tracy, a hot single mom, is hitting on him. 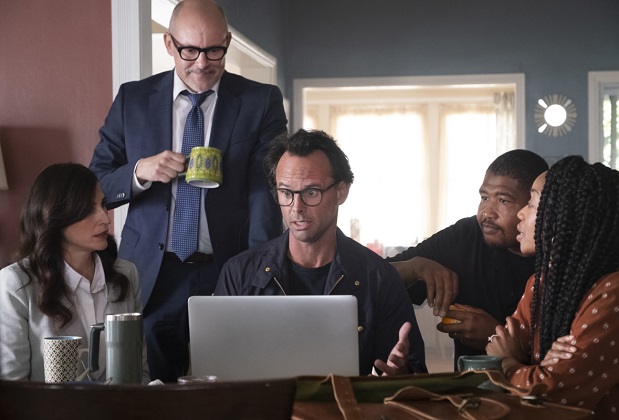 When Wade finally reaches his last frozen meal, it hits him that his wife is really gone. His friends suggest that it’s time for him to start dating again and in turn help set up an online profile. When the messages start rolling in at an alarmingly fast rate, his female pals explain that he is “that elusive creature that all single women are looking for.” As a devoted father and husband who hasn’t had sex with anyone besides his wife in 20 years, “you’re factory fresh, buddy!” Watkins’ Delia declares. But Wade doesn’t want the pity dates, so he changes his status from “widowed” to “single.”

Wade’s first date notices the white circle on his ring finger and immediately asks the waiter for the check since she doesn’t go out with cheaters. Wade exclaims, a bit too loudly, that he couldn’t cheat even if he wanted to because his wife is dead, earning him sympathy stares (and comped appetizers). That turns on his date, who invites him back to her place, but Wade isn’t ready for that. Instead, he returns home — to find his eldest daughter (Fancy Nancy‘s Ruby Jay) being felt up by the boy next door!

Over late-night pancakes, Wade and his daughters pledge to work together as a team and get their lives back in order. And things are looking up for Wade’s love life, too, as he later finally clues into Tracy’s signals.

What did you think of The Unicorn? Grade it below, then hit the comments!