Fans of The Resident had to wait all summer to learn who flatlined on that hospital bed last May — but once Tuesday’s season premiere began, we got an answer within 30 seconds.

Though Nic’s sister and father were both in danger of dying last spring, it was her sis, Jessie, that succumbed to her many medical setbacks. When we pick back up with Nic, she’s sitting in a field of black-eyed Susans, having a lovely chat with a vision of her sister, tearfully regretting that she couldn’t do more to save her sibling. Jessie reminds Nic that none of this was her fault — but their “conversation” is interrupted by Conrad and Kyle, who have come to scatter Jessie’s ashes. Nic insists she isn’t ready yet, despite the fact that Jessie’s been gone for nearly a month, and walks away without another word.

Much of Tuesday’s premiere focuses on Nic’s grief — more specifically, her inability to cope with such a major loss. “Does it ever get any easier?” she weeps to Mina, who also has experience with losing sisters. Mina is upfront about the never-ending cycle of grief, and she can’t promise that Nic will ever be over it. But she does urge Nic to come back to work, assuring her that focusing on other patients is the only way to keep her head above water. (Plus, Red Rock Mountain Medical — the skeezy conglomerate that bought Chastain Park last season — cut the funding for Nic’s free clinic. So she’d definitely have a different fight to focus on if she came back to her nursing job ASAP.)

Nic also hears some extremely wise words from one of Conrad’s patients, who previously lost her son. “He never really left me,” the patient says, adding that her son simply lives in her heart now. And that wisdom seems to heal Nic significantly — enough to finally scatter Jessie’s ashes, at least. At the end of the hour, Nic, Conrad and the rest of the Chastain Park staff gather for the ceremony, and Nic looks calm and peaceful as her sister’s ashes fall to the grass.

On the other hand, Kyle can’t seem to find closure with his daughter’s death, because he doesn’t believe she should have died in the first place. According to the hospital’s official autopsy, Jessie died of a massive blood clot, which isn’t uncommon for someone in her condition. But Kyle smells a rat, and he begs Conrad to look over Jessie’s medical records and get to the bottom of it. “This isn’t about a lawsuit,” he assures Conrad. “I just want the truth. I must have the truth.” And Conrad, who knows full well that Nic won’t like it if she finds out, agrees to do a little investigating. 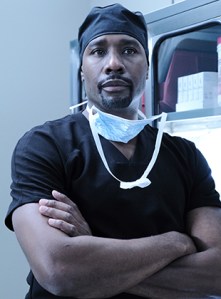 * After an explosion takes place in Chastain’s basement, ruining an extremely costly proton beam accelerator that was to be used for cancer treatments, Conrad and two others suffer major injuries. (Though Conrad will be fine after a few weeks on crutches to heal a broken ankle — and he’ll have to walk with a cane, Dr. House-style.)

The other injured patients are a young boy named Jonah, who suffers an internal decapitation (a phenomenon when the spinal column gets detached from the base of the skull); and Annie, a particle physicist who has to have multiple pieces of shrapnel removed from her body after the explosion. Fortunately, Kit manages to fuse Jonah’s spine and skull back together in a somewhat miraculous procedure that doesn’t leave him paralyzed, and Mina and the Raptor work together flawlessly to get the shrapnel out of Annie’s body. (Unfortunately, Annie’s injuries lead to the devastating discovery that she’s got Stage 4 cancer, but she says she’s determined to fight it.)

Throughout all of this, Conrad & Co. must contend with Red Rock Mountain Medical, which seems to care much less about patients than it does profits. For example, even though Kit saved a young boy’s life by literally putting his skeleton back together, Red Rock isn’t sure they want to renew her contract, because she only bills $2 million a year. When you compare that to the $80 freaking million billed by new neurosurgeon Barrett Cain (Rosewood‘s Morris Chestnut), Kit isn’t bringing in enough money, and that’s enough for Red Rock to let her go. Granted, Kit isn’t out the door just yet — but when she finds out from Dr. Bell that her job may be in danger, primarily because Red Rock cares about the bottom line more than saving lives, she vows to start interviewing at other hospitals immediately.

* You might recall a young woman named Eloise, who appeared in Season 2 as a Chastain Park patient who underwent a miraculous triple transplant. Now, she’s a sub-intern at the hospital, and she couldn’t be more thrilled — except for the fact that Chastain’s doctors won’t let her near any medical cases that could be hazardous to her health, given her battle with cystic fibrosis. She’s harshly kicked out of the ER by Irving, and Devon later reminds Eloise that the staff just wants her to be safe. “What you all need to remember is I’m a doctor-in-training now,” she counters. “Not your patient.”

With that, I hand it over to you. What did you think of The Resident‘s return? Grade the Season 3 premiere in our poll below, then hit the comments with your thoughts!