Get out your hankies, because New Amsterdam just pulled an emotional bait-and-switch. Tuesday’s Season 2 premiere began three months after the ambulance crash, with Max waking up next to his wife Georgia, as their baby daughter Luna cried. “Your turn,” Georgia declared, so Max stood to pick up his little girl.

Then as Max went about his workday, receiving miraculously good news about his health, flashbacks to the accident started to unravel what happened that fateful day. Doubt began to creep in about the fate of Helen and then Lauren until it was revealed that both survived, although the latter was still in debilitating pain on her first day back at work. And that brings us back to Georgia, who at the end of the day again declared, “Your turn,” to which Max replied, “It’s always my turn.” Then a flashback revealed that Georgia actually died on the operating table, so Max has been comforting his crying daughter all by himself in the present.

Below, showrunner David Schulner talks about the decision to kill off Max’s wife — and how Max/Helen ‘shippers almost inadvertently saved her life. 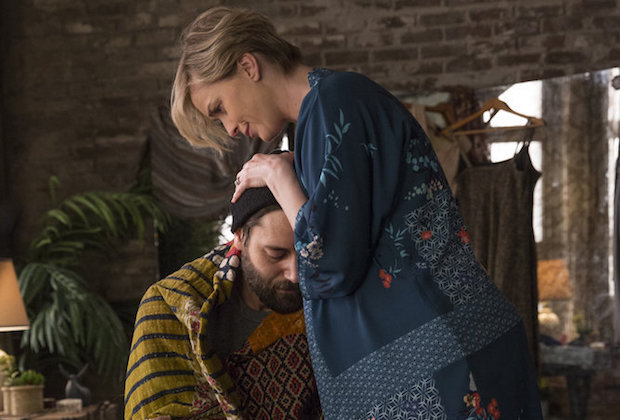 TVLINE | There were a number of ways that the fallout of the crash could have gone, and even in the premiere, there are moments where it seemed like maybe Lauren or Helen died. Why did you decide that Georgia would ultimately be the one who would die?
Well, it’s something I was kind of trying to set up in the pilot episode. When Georgia came in with the preeclampsia, and there was trouble with the baby, I was trying to set up the end of the season in those scenes. As we started talking about our season finale, I chickened out, and I decided we’re going to keep Georgia, because I love Lisa O’Hare, and I just loved seeing Max happy, finally. Then Peter Horton, our executive producer, gently nudged me and supportively said, “I think you’re chickening out,” and I said, “I know. I feel it too, but I love these characters, and I don’t want to hurt Max anymore.” And then NBC less gently nudged me and said, “You’re chickening out. You set this up in the pilot. You’ve been talking about it all year. You should follow your gut.” And so we did it, and it was horribly painful to do in the room as we broke the episode, it was horrible as we wrote the episode, and it was horrible for everyone shooting the episode. It really was like a death. Having Lisa O’Hare play a corpse on that operating table, those things are really hard to ask actors to do, and we didn’t do it lightly, and we didn’t do it cavalierly. A lot of thought and anguish went into the process.

TVLINE | Did you ever consider going a different route and having it be Helen or Lauren? Or were they always just red herrings?
No, it was always just a red herring. We set up Lisa in the pilot, and something was going to go wrong during the birth of the child, and we found ways to hide it from the audience as best we could, for as long as we could. Peter, who directed the season finale… came to me and said, “What if we just didn’t see Sharpe after the ambulance crash?” I think it was casually, just over lunch, I said, “Yeah, that’s a great idea,” not knowing the impact and the gold that was, of not even seeing Sharpe, [and] how much leeway that would give us going forward in the premiere. And Lauren having just said that she was thinking about taking time off gave us a tremendous amount of red herring-ness in the opening episode.

TVLINE | What kind of storyline avenues does this loss open up in Season 2, in particular for Max?
It gives Max another burden to carry. I feel like the show operates at its best when Max is dealing with both his personal life and the hospital life and trying to juggle both. …. So with Max’s cancer in remission, he needed another obstacle in his life, and it feels heartless and cruel to do what we did to him, but we’re not writing comedy — most of the time.

TVLINE | Is this a season of grief and healing for him then? Is he going to be in a pretty dark place most of the year?
I wouldn’t say dark, because the show isn’t really dark. What the show tries to do through Max is to find a way to stay positive, because it’s definitely easy in the world we’re living in today to focus on the negative. But what’s missing right now in our lives, I feel, is optimism, and Max still has that. It might be a little buried during the first part of the season, but he has to focus on something to stay positive about, and he has Luna, and he has the hospital. But this season is definitely going to be about grief and healing.

TVLINE | Is he just in pain, and that’s why he’s lashing out at Georgia’s doctor? Or did something happen during her treatment?
Well, I think that’s Max’s fear and worry: Did everyone do their best? Could she have been saved? That won’t go away, and that’ll come to a head with Dr. Hartman in a future episode, definitely. 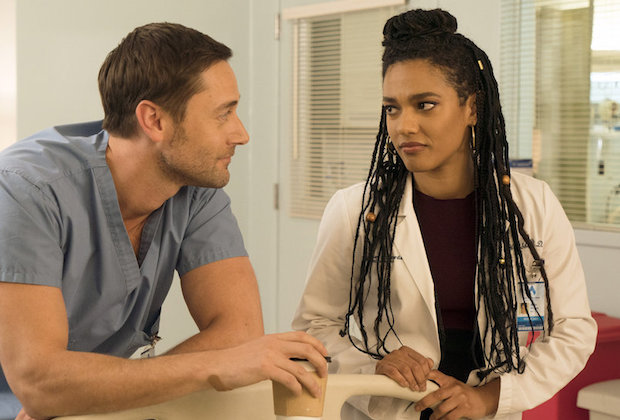 TVLINE | There’s also some distance or a little bit of a coldness between Max and Helen when she comes back. Is that just his grief, or did something else happen between the two of them in those three months?
When Sharpe put her hand on him and said, “If you ever want to talk about it, you know, I’m here,” I think Max does not want to talk about it, and I think Max doesn’t want to be near anyone who wants him to talk about it. He’s just not there yet, especially at work. When he’s able to focus on everyone else, he doesn’t want to be reminded of what he’s missing.

TVLINE | How much did the bond that has developed between Max and Helen over the first season influence your decision on who would ultimately die at the end of the season? I know you said you had built it into the pilot that it was Georgia, but when you saw how people started to really invest in Max and Helen, did that drive the decision into the “three women” scenario in the finale?
You know, it’s interesting: It almost made me not kill Georgia. We have a huge fan base who all they want to do is see Max and Sharpe together, and that’s not in the cards right now. So without Georgia, it would actually make that easier, and we didn’t want that. We don’t want them to be together. They’re the best of friends, and that’s the relationship that we’re really excited to explore: two adult friends who love and care for each other. So actually, Georgia being gone made it too easy to give the fans what they wanted. It was actually a thought that maybe we shouldn’t kill Georgia for that very reason.

TVLINE | It appears that Lauren is in a great amount of physical pain that she’s trying to just mask. How is she dealing with that as a working doctor and also as somebody who was addicted to Adderall?
Yeah, I think she is trying to go cold turkey. She doesn’t trust herself, doesn’t want to get sucked back in. She knows she has an addictive personality, she knows that it’s genetic, and she’s not taking any chances. So she’s going to white-knuckle her way through this pain with a little bit of help, but she won’t be able to do that forever.

TVLINE | One of the things I really loved in the season premiere was that little moment between Helen and Lauren. Are we going to see more of a friendship between the two of them?
Absolutely. They’re really great people to be able to lean on each other, especially since they were on the outs for the latter half of last season.

New Amsterdam fans, what did you think of the season premiere? Grade it below, then hit the comments!