This Tuesday’s NCIS Season 17 premiere wasted little time before Gibbs asked Ziva the million-dollar questions: “Where have you been? What happened to you?” Alas, before the “dead” agent could get into that, Gibbs’ basement was riddled with gunfire from outside the windows. After emptying their respective pistols at the unseen shooters and hearing footsteps near the stairs, Gibbs and Ziva reached for assorted workshop supplies and began jerry-rigging an explosive….

Bishop, Torres and McGee, meanwhile, had gone out for drinks after wrapping the case involving Fornell’s daughter when they got word of gunfire at Gibbs’ place. Arriving at the vacated scene, they found few clues save for a hidden coal chute apparently used for escape — and a ripped swatch of wool coat. Bishop pocketed the familiar fabric, then privately made a beeline for Ziva’s office shed in the suburbs. When landlady Odette found her rummaging around, Bishop asked about the missing jacket to which the ripped wool belonged. After Bishop argued they both have Ziva’s back, Odette revealed that the late Eli David’s files were never the target of the years-ago farmhouse explosion in Israel; Ziva was. Ziva suspected as much, and thus went deep undercover to “sift through evil in every form” to find the perpetrator. But in that isolation, Odette noted, “being separated from everything your heart holds dear takes its toll.” “Does Tony know?,” Bishop and we wondered aloud. “That’s not for me to say,” Odette hedged, warning that the more who are in the know, the more danger Ziva is in. 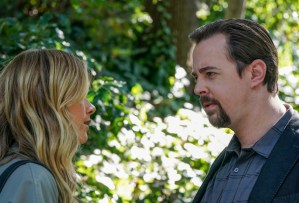 Just as Bishop wrapped things up with Odette, McGee appeared, having noticed her interest in the ripped coat. Bishop shared that the person on the run with Gibbs is Ziva, who is, yes, alive. Off of McGee’s anger, Bishop explained that Ziva asked her (via that Season 16 letter) to keep her existence under wraps, and Ellie figured that someone so loved by the team should be listened to. Still, “She was like a sister to me,” McGee countered. Later, the team brought a frustrated Vance up to speed on the fruitless search for Gibbs, after which Torres called out a sweaty-necked Bishop for lying. Retreating to the morgue, Bishop looped in Torres — after which an unseen Jimmy Palmer popped up from behind the exam table, before doubling over in shock at what he overheard.

Traversing through water tunnels, Ziva explained to Gibbs that a woman named Sahar wants her dead — and now she and her well-fortified team are after Gibbs, too. Though she has never met this Sahar, Ziva’s intent is to find and kill her, for that is “the only path that will lead me back to Tony and Tali.”

While splitting away from Gibbs for a bit, Ziva appeared dazed, as she flashed back to Adam Eshel explaining, after the farmhouse explosion, that everyone believes she is dead. But together, they will track down this threat, so she can be with Tony and Tali again. Coming out of the memory, we saw Ziva regard and then hide away a stash of pills, just as Gibbs caught up with her. (He found a revolver with one bullet ditched in the sewer. Convenient.) Ziva explained how once she put a name to the threat, she formed a simple plan to reveal herself, draw out Sahar, and kill her. But Sahar — not knowing of Tali’s existence, and seeing Tony of little value outside of sad memories — decided to target Gibbs first. “You and I are not who we once were,” Ziva noted, cueing her former boss to cut bait. “That doesn’t matter,” he deferred. “I’m not leaving you.”

Ziva took her and Gibbs onto a city bus, where an SD card containing intel has been hidden under a certain seat. As they waited for the seat to be vacated, Ziva had another flashback — to Adam warning that Sahar will go after Gibbs. Ziva told Gibbs about the significance of the necklace she now wears — Tali had nudged her to buy it for herself — and then came clean about the pills she is sure Gibbs spied earlier. She spoke of how Gibbs, like herself, would do anything to spend one more minute with his daughter. And because of quest to reunite with Tali, Ziva now suffers from the demon known as anxiety. The pills take the edge off, but also dull her senses — so she won’t be taking more anytime soon.

After the seat near the front of the bus finally vacated, Ziva went to retrieve the card… but it’s gone. She and Gibbs raced off the bus, and Ziva caught up to and pummeled the passenger who pinched the card. When the burly fella goes for a gun, Gibbs stopped him/saved Ziva with a fatal shot from the found revolver. Ziva grumbled that Gibbs killed a good lead, but they reclaimed the SD card and took the guy’s truck for good measure. During a stop later, Gibbs rang McGee — against Ziva’s wishes — to alert him to an incoming SD card that needed hush-hush decryption.

At NCIS, Bishop learned through a contact about “Mira Sahar Azam,” a POW in Syria who escaped a month prior to the farmhouse explosion. McGee in turn relayed the intel from the SD card which pointed to a “Mr. Rogers” in a D.C. penthouse. Defying Gibbs orders, the team headed out to the location. Ziva and Gibbs arrived at the penthouse first, where “Mr. Rogers” is at first triggered to hear Mira Sahar Azam’s name/alias, and then shocked to be standing in the presence of the “dead”-but-infamous Ziva David. When Ziva asked why Sahar wants her dead, Rogers — yanking Tali’s necklace off her neck — said that it has to do with Ziva’s “albatross,” her “burden”… her half-brother Ari. Just then, snipers perforated Rogers, his goons and much of the penthouse with bullets. Gibbs and Ziva fled downstairs and appropriated another car, just as McGee, Bishop and Torres pulled up. A stern look from Ziva signaled them to stand down.

Afterward, while waiting for Ziva’s “associate” to arrive, she and Gibbs quarreled over her plan to kill Sahar once she found her. Recalling her earlier comment about them both doing whatever is demanded to spend one more moment with a daughter, Ziva revealed that she was not talking about Kelly — she was talking about herself, and how Gibbs never questioned her death nor came looking for her after the explosion. “You abandoned me,” she groused. Ziva’s “associate,” Odette, pulled up and unveiled a medium-sized armory in the back of her SUV. Later, Ziva and Gibbs found and got the drop on Sahar. Ziva had her gun trained intently on hether predator, while flashing back to Adam, what Rogers said about her albatross, Ari’s death at her hand…. So many moments. “If you kill me, a U.S. Senator will be dead by morning,” Sahar claimed. That’s tomorrow’s problem, Ziva sniffed. Gibbs smacked away Ziva’s trained gun, only for her to instantly whip out another, as we faded to black….