If you’ve seen any of the (numerous) commercials for ABC’s Emergence, then you already know the strange event that happened in the town of Southold: “A plane crashed on a beach!”

But, as we learned in Tuesday’s premiere, it’s really what happens after the plane crash that’s even weirder.

Allison Tolman (Fargo) stars in the supernatural drama as Jo Evans, the town’s police chief. When Jo arrives at the scene where said plane went down — a crash that sent mysterious, iridescent light into the sky, it’s worth noting — she finds a shy young girl (Billions‘ Alexa Swinton) hiding near the crash site, who quickly takes a liking to Jo once she decides the chief is trustworthy.

Together, Jo and the girl (who is later given the name Piper) head to the hospital, and a CT scan reveals that Piper is totally injury-free — even though she can’t remember anything, including her name or where she’s from. Plus, the doctors are skeptical that Piper was on the plane when it went down, given that there’s not a scratch on her. 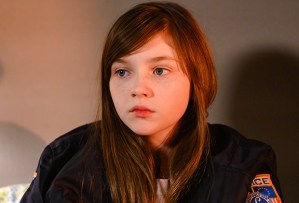 Jo decides to let Piper stay at her house, where she lives with daughter Mia and cancer-stricken dad Ed, until the situation gets sorted out… but she isn’t the only one who wants custody of Piper. Throughout the premiere, Piper is repeatedly pursued by a man and woman with malicious intentions, who first pretend to be NTSB investigators before posing as Piper’s real parents. It’s not clear what they want with Piper, but it sure isn’t good — and just when Jo thinks she’s gotten Piper to safety, the man and woman abduct the girl and drive off with her.

Here’s where things get really bizarre: While Jo is speeding after Piper’s abductors in her police car, the vehicle that contains Piper suddenly crashes and flips over. The man and woman inside are killed by the crash, but Piper, once again, escapes completely unharmed. Even stranger? It doesn’t look like the kidnappers’ car actually hit anything. It just… spontaneously flipped. (Add that to the list of odd Piper-related occurrences in the premiere, along with her apparent telekinetic abilities and the appearance of a strange symbol on Jo’s television, which continues to flicker on the screen as Piper gets closer to it.)

For much of Tuesday’s episode, Piper tells Jo that she still can’t remember anything from her past, including the incident that led her to Southold’s beach in the first place. In fact, she’s a little afraid to remember the details: “If I remember, I’ll have to leave. And I want to stay,” she tells Jo.

But it seems Piper might have a little more information than she’s letting on. At the end of the hour, Piper heads into Jo’s bathroom and has an extremely strange experience after brushing her teeth. As she stares at the water that’s running from the tap, Piper almost seems to morph with it, leading to a strange vision in which she’s kind of becoming the water, letting it wash over her until her face is nearly covered by the stream — until she jolts herself out of the trance, looking stunned.

Then, Piper reaches into Jo’s jacket, which she’s been wearing for most of the episode, and takes out a box cutter that she swiped from Ed’s tools earlier that day. Watching herself in the bathroom mirror as she does it, Piper uses the box cutter to nick herself right behind the ear, then reaches inside the cut and pulls out a small, glowing orb. It’s practically the size of a Skittle, and it features the same symbol that appeared on Jo’s television that afternoon. Piper then washes it down the sink, cleans up the mess and takes her hair out of its ponytail in order to cover the wound behind her ear — and she looks mighty satisfied with herself.

OK, your turn! What did you think of Emergence‘s premiere? Cast your votes in our polls below, then drop a comment with your full reviews!