Revivals are everywhere you look on TV these days — and frankly, we’re growing a little tired of them. For every cast that still has that original spark we fell in love with years ago, there are two or three more that are just rehashing old jokes for an easy paycheck. In fact, we’re this close to swearing off TV revivals altogether… but we’d make an exception for Freaks and Geeks.

Debuting 20 years ago this week on NBC, Freaks and Geeks was set in the past — following two sets of outcasts at a suburban Michigan high school in 1980 — but it was years ahead of its time, blending smart comedy and heartwarming drama in a way that few shows attempted back then. The bittersweet tone from creator Paul Feig and executive producer Judd Apatow absolutely nailed the fleeting victories and crushing defeats inherent in the teenage experience, and they pulled off maybe the greatest casting coup in TV history, assembling a jaw-dropping number of future stars just as their careers were first taking off. (Plus, the kids actually looked like high school students, unlike a lot of TV shows we could mention. *cough*cough*Riverdale*cough*cough*) 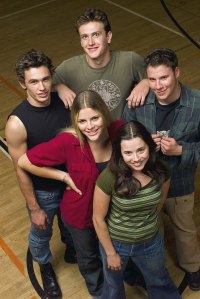 Freaks and Geeks was too weird to live, it seems: Despite glowing reviews, it got axed by NBC after just one season and remains a staple on every “TV shows cancelled too soon” list. But as its cast and creative team went on to incredible Hollywood success, and more series continue to blur the line between comedy and drama, Freaks and Geeks feels more and more like a show that deserves another chance. (Current-day critical faves like PEN15 and Sex Education are practically unimaginable without it.) That’s why we’re willing to suspend our “no more revivals” rule in this case: For the show’s 20th anniversary, we’d love to see a Freaks and Geeks movie that follows the McKinley High crew as they gather for a particularly awkward 20-year high school reunion.

The movie kind of writes itself: It’s been twenty years since Lindsay and her stoner pals graduated from McKinley — which would place us around the year 2000 — and the former mathlete-turned-rebel returns to see what’s become of Daniel, Kim Kelly, Ken and her former beau Nick. Did Lindsay turn that summer following the Grateful Dead into a career as a music journalist? Did Nick find fame and fortune as a rock drummer? (Yeah, probably not.) Plus, we’d check in with Lindsay’s brother Sam and his geek pals twenty years later, too, of course. At least one of them would be an obnoxious millionaire tech guru by the year 2000, right?

It’s a lot to fun to think about, but there is one big thing standing in the way: the cast’s aforementioned stardom. It’d admittedly be tough to get James Franco, Seth Rogen and company all together at the same time to shoot a reunion movie; just about every Freaks and Geeks alum is busy working somewhere these days. But all of those stars remember the show fondly and credit it for giving them their start… and surely Netflix, which offered the original Freaks and Geeks on streaming until recently, could cough up the obscene amount of dough required to reassemble this cast one more time. (Plus, making it a one-off movie rather than a full series revival makes it more likely that the full cast would be available to reunite.)

Yeah, we know it’ll probably never happen, and we’ll have to resort to cracking open our well-worn Freaks and Geeks DVD set to celebrate this anniversary instead. But in an era when even mediocre sitcoms are getting lavish network revivals, we’re keeping our fingers crossed… because this is one high school reunion we’d actually look forward to attending.