After doling out critiques for nearly 30 seasons, Dancing With the Stars proved on Monday that it can handle a little constructive criticism of its own.

In the wake of last year’s polarizing cycle — in which multiple well-scored frontrunners got the boot early, but very dark horse Bobby Bones scored the Mirrorball — DWTS has heeded the advice of disgruntled fans who called for a change to the show’s structure.

Here’s how it will work: Each week, after the bottom two couples are revealed, judges Carrie Ann Inaba, Len Goodman and Bruno Tonioli will have a chance to save one of the in-jeopardy pairs, while the other will be eliminated for good. If Carrie Ann and Bruno are divided in their decision, head judge Len will cast the tie-breaking vote. (There’s currently no word on when the judges will lose their power this season — if they ever do, that is. I kinda suspect that if this save existed during last year’s finale, they might have ripped that Mirrorball right outta Bobby Bones’ hands.)

Before the judges could make their first save, though, 12 more dances took place in the ABC ballroom. Let’s revisit the highs and lows from Week 2:

BEST OF THE NIGHT
Hannah Brown and pro Alan Bersten (Viennese Waltz) — Hannah has gone from handing out roses to lying in a pile of them on the dance floor — and I think the latter actually suits her better! After watching most of the contestants deliver so-so routines on Monday, Hannah’s waltz was a breath of fresh air; the dance was executed so gracefully, it’s almost like the former Bachelorette was floating off the ground. Considering Hannah and Alan are already scoring eights in Week 2, I’m really, really excited to see what they’re capable of down the road. Judges’ Score: 24/30 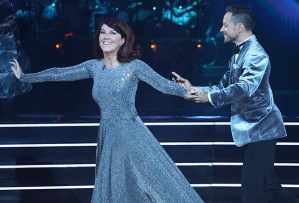 MOST PLEASANT SURPRISE
Kate Flannery and pro Pasha Pashkov (Foxtrot) — Oooh, this season just got very interesting! Kate’s performance last week was just OK, and it seemed she might get overshadowed by more immediate frontrunners. But this utterly fabulous foxtrot was easily the night’s most charming routine, and I do believe the Office alum just made herself a contender. Judges’ Score: 21/30

MOST IMPROVED
Lamar Odom and pro Peta Murgatroyd (Salsa) — I get that it’s a little odd to give Lamar this superlative, considering he only scored a 12 out of 30. (Up from last week’s 11!) But even though the basketball pro’s movements were still choppy and a tad graceless, he made fewer errors than some of his competitors, and he brought some swagger to that salsa that I honestly wasn’t expecting. Add in Lamar’s struggles with short-term memory loss, following an overdose and a coma four years ago, and you can’t help but be impressed that he’s even dancing at all. Judges’ Score: 12/30

WORST OF THE NIGHT
Ray Lewis and pro Cheryl Burke (Foxtrot) — Well, the first eight-count was good! After that… not so much. I totally admire Ray’s positive attitude and willingness to take criticism. (And he’s taking some serious criticism, particularly this nugget from Len: “It’s only your personality that’s given you the mark you’ve got. Otherwise, it would have been much, much lower.” Way harsh, Tai.) But there were huge portions of this routine during which Ray was totally at sea, whether he was stepping with the wrong foot or blatantly watching Cheryl for cues on the next steps. Judges’ Score: 15/30

Your turn! Do you think Mary and Brandon deserved to go home first? Drop a comment below with your reactions!