Court is now in session at CBS with the series premiere of All Rise, which has such a Shondaland vibe that I went to IMDb to check creator Greg Spottiswood’s resume. (For what it’s worth, he didn’t work on any Shonda Rhimes shows; his credits instead include the Canadian dramas Remedy and King.)

The new legal drama introduces us to the caring Lola Carmichael (Luke Cage‘s Simone Missick), who is a newly appointed L.A. county superior court judge. Her circle of friends includes District Attorney Mark Callan (Hart of Dixie‘s Wilson Bethel), who unsuccessfully tries to lure Lola back to the D.A.’s office. When court reporter Sara (Lindsay Mendez) asks if the two are sleeping together, public defender Emily Lopez (Jessica Camacho, playing the complete opposite of her badass Flash bounty hunter) replies that Mark is dating a lingerie model and Lola is married to an FBI agent. So that’s that, in case you were wondering about a potential romance. 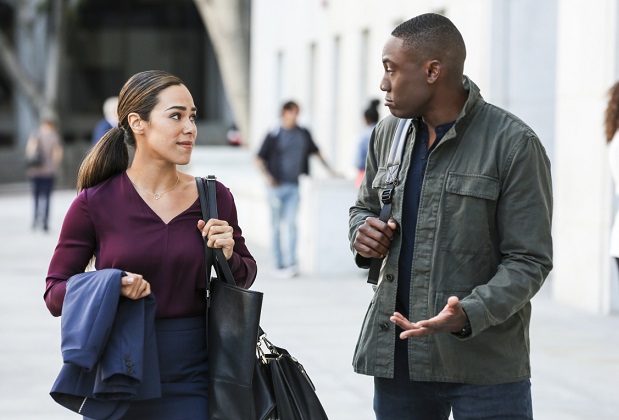 Before the first commercial break, Lola stands up for a pants-less woman who has been arrested, which causes a bailiff to lose it and start shooting in the courtroom. Another bailiff/lawyer-in-training Luke Watkins (Travelers‘ J. Alex Brinson) saves the day, then also hits it off with the charmingly frantic, frazzled Emily. He brings to her attention a discrepancy in a detective’s testimony. When Emily presents it in court, Lola makes waves, angering the LAPD and finding the defendant not guilty on her first major case.

The ensemble also includes Judge Lisa Benner (CSI‘s Marg Helgenberger), who assigns Lola an experienced legal assistant (The Americans‘ Ruthie Ann Miles) with whom she has a troubled history. (“We call you the Lolacoaster,” her new assistant Sherri says.)

What did you think of All Rise? Grade it below, then hit the comments to back up your pick!