Star Trek franchise vet Aron Eisenberg, who recurred as Nog on the 1990s syndicated series Deep Space Nine, died on Saturday at the age of 50.

A cause of death has not been disclosed, but our sister site Deadline reports that Eisenberg had two kidney transplants, most recently in 2015.

Eisenberg’s wife, Malíssa Longo, shared the heartbreaking news in a Facebook post. “It is with extreme regret and sadness to announce that my love and best friend, Aron Eisenberg, passed away earlier today,” she wrote. “He was an intelligent, humble, funny, emphatic soul… He was like a breath of fresh air, because I knew I would always hear the truth from him. Even if I didn’t want to hear it and even if the truth was inconvenient. He made me (and still makes me) want to be the best human I can possibly be, because he always strove to be the best human he could be.” 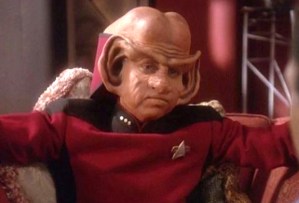 In addition to his stint on DS9, Eisenberg’s TV credits include episodes of The Wonder Years, Parker Lewis Can’t Lose, Tales From the Crypt, The Secret World of Alex Mack, Brotherly Love and The Division. He also appeared in the made-for-TV movies Amityville: The Evil Escapes, Brave New World and Cozmo’s.