Lois and Clark are rising, with the news that Erica Durance will join Smallville co-star Tom Welling in the Arrowverse‘s “Crisis on Infinite Earths” crossover. 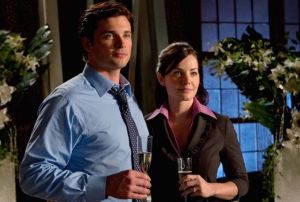 TVLine has learned that Durance is on board to reprise her role as Lois Lane, guest-starring in multiple episodes of the five-part event. As mentioned with Thursday’s announcement that Tom Welling will play Clark Kent in the crossover, viewers will see where these characters are almost 10 years after Smallville ended.

Though this marks the first on-screen reunion for Welling and Durance since Smallville‘s series finale, the latter previously dipped her toe into the Arrowverse with a run as Supergirl’s dearly departed (…but not) mother, Alura Zor-El.

“Crisis on Infinite Earths” kicks off Sunday, Dec. 8 with an episode of Supergirl, then continues with a Monday episode of Batwoman and that Tuesday’s The Flash. After a month-long holiday break, it concludes with the Jan. 14 episode of Arrow followed by a special installment of Legends of Tomorrow (which premieres at midseason).

Arrowverse 'Crisis on Infinite Earths' Crossover: Everything We Know

Previously announced casting includes Tyler Hoechlin and Elizabeth Tulloch as Supergirl‘s own Clark Kent/Superman and Lois Lane, while Legends of Tomorrow‘s Brandon Routh will pull double duty as the Kingdom Come version of Superman. (Kate Bosworth… is on The I-Land.)

Preceding her stint as Supergirl‘s Alura, Durance’s post-Smallville credits included five seasons of Saving Hope (on which she starred and served as a producer) plus guest spots on Charlie’s Angels and Harry’s Law (as “Wonder Woman”).