Friendly warning: Like Mrs. Patmore’s unwanted groceries, this article spoils the events of the Downton Abbey movie. (Hey, even that was kind of a spoiler!) Anyway, if you haven’t seen it yet, you might want to check back later.

The Downton Abbey movie — which feels a lot like an episode of the show, only longer and more lavish, with more sweeping aerial shots than ever before — picks up two years after the series finale, with the Crawleys learning that the King and Queen of England are set to visit as part of their upcoming royal tour. In true Downton fashion, this sets into motion a series of well-mannered shenanigans, the least consequential being Anna’s decision to drug the royal staff in order to give Downton’s crew a chance to serve the king and queen.

Lack of consequences aside, a lot goes down in this movie, and no character emerges quite the same as they enter. (Except Molesley, who will always be a real-life Mr. Bean.) Below, we break down the biggest — and most tragic in some cases — twists from the Downton Abbey movie: 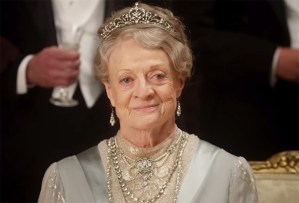 AN HEIR OF MYSTERY | Violet is less than thrilled to hear that Robert’s cousin Maud will be at Downton for the royal visit, as she still holds a grudge against her for not recognizing Robert as her rightful heir, even though he’s her closest living relative… or so everyone believes. With her detective fascinator firmly secured, Isobel discovers that Maud’s beloved maid, Lucy Smith, is actually — wait for it — her daughter! She encourages Maud to share this secret with Violet, which does ease some of the tension between them, even if the Dowager Countess remains characteristically displeased with the whole situation.

MARY, FULL OF ANXIETY | Now it’s time to check in with Mary, whose outlook on the future of Downton has shifted a bit since we last saw her. She and Henry are still raising little George, and this has understandably altered her priorities. Suddenly, a modest estate — one that doesn’t come attached with a literal village of responsibilities to handle — sounds like a more sensible fit for her little family. And she seriously considers taking the steps to make this her new reality… that is, until the Dowager Countess sits her down for an absolute gut-punch of a fireside chat. She confides in Mary that she doesn’t have much longer to live, and that Mary will someday take her place as Downton’s resident “scary old lady,” adding that Mary represents her own best qualities. I understand that some things are inevitable, but I’m just grateful that Maggie Smith’s character lived to see the end of the movie. That loss would have been too much to handle. 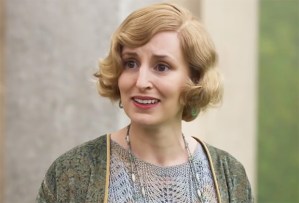 EDITH’S EDICT | Of course, Mary of Teck isn’t the only queen who visits Downton in this movie. Edith Pelham — excuse me, Lady Hexham — also arrives to welcome the royals, bringing along a mother of a secret: she’s pregnant! (Well, she suspects that she’s pregnant. But in 1927, that was about as good as any test result.) Unfortunately, this puts her husband in a bit of a pickle. You see, the king just offered Bertie a position on his upcoming South African tour, one that begins around the same time the hypothetical baby would potentially be born. The king doesn’t seem to understand why this would be an issue (men, amirite?), but after a little chat between Cora and Queen Mary, everything is settled rather nicely.

BRANSON… TOM BRANSON | We realize that Branson’s budding romance with Lucy is probably the bigger takeaway from this movie — especially since it further connects him to the Crawley family — but his subplot about foiling an assassination attempt against the king is what left us feeling shaken and stirred. And the fact that it’s barely acknowledged afterwards, save for a fleeting comment at the ball, is simply baffling. In fact, between Branson saving the king’s life and inadvertently convincing Princess Mary not to divorce her husband, the royal family really does owe him quite a bit. 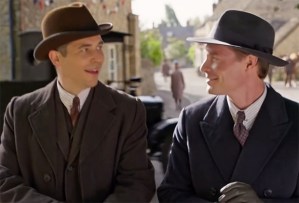 BARROW BEHIND BARS | Despite Thomas Barrow’s penchant for treachery, it’s impossible not to sympathize with the Crawleys’ deeply closeted butler, and this movie only hammers that point home further. Since Mary brings Carson back to (temporarily) replace him at Downton, Barrow decides to hit the town with Richard Ellis (The Royals‘ Max Brown), one of the king’s noticeably flirtier staffers. When it appears that Richard has stood him up, Barrow follows another flirty gentleman into a gay speakeasy, where he stumbles upon one of the finest gifts Downton Abbey has ever given us: a room full of men in period clothing doing the Charleston. Unfortunately, a police raid cuts the festivities short, and Barrow is thrown into jail with the rest of his fellow “perverts.” Suddenly, a plot twist: Not only does Richard show up to bail Barrow out of jail, but he leaves him with a romantic memento (and a kiss!) of their brief time together. Considering how much Barrow struggled with his sexuality throughout the series, it was good of the movie to at least give him the hope of a happy ending. Even a 1927 version of that.

Now that we’ve all had a chance to experience the Downton Abbey movie, let’s talk about it: What did you like? What did you hate? And how hard did you sob as the Dowager Countess reflected on a life well-lived? Grade the movie below, then drop a comment with your full review.