Horror has never been network TV’s strong suit. Outside of a few notable exceptions (Hannibal, The Exorcist), the big networks have been content to let cable and streaming TV dominate the darker side of horror ever since Mulder and Scully first fired up their flashlights on The X-Files. But CBS’ new fall drama Evil — premiering Thursday, Sept. 26 at 10/9c; I’ve seen the first two episodes — represents a bold step back into the genre, with a star-making performance from Katja Herbers and maybe the creepy-crawliest debut episode since the glory days of Mulder and Scully. 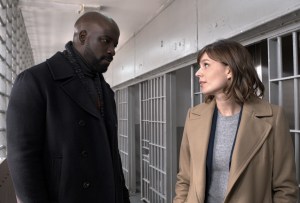 In fact, Herbers’ character, forensic psychologist Kristen Bouchard, seems to be a proud graduate of the Dana Scully School for Skeptics. Thick-skinned and unflappable, she delves into the twisted minds of criminals for a living, working as an expert prosecution witness and treating hard facts and science like gospel. She’s investigating one accused serial killer in particular when priest-in-training David Acosta (Luke Cage‘s Mike Colter) swoops in with an out-there theory about demonic possession. Kristen roundly rejects that… until the killer attacks her while speaking in tongues.

That tees up a classic Mulder/Scully dynamic between Kristen and Acosta: He challenges her stubborn cynicism, while she grounds his New Age-y mumbo jumbo. (And unlike The X-Files, the show actually acknowledges the sexual chemistry between them right away.) Together, they make a solid duo, with The Daily Show alum Aasif Mandvi providing comic relief as Acosta’s deadpan colleague Ben — which makes him the Lone Gunmen, I guess? Acosta works as an “assessor” for the Catholic Church, paid to go out and investigate unexplained phenomena, and since Kristen is strapped for cash, she reluctantly joins Acosta’s team to distinguish between the demonically possessed and the merely insane. 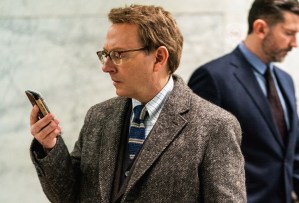 It’s an intriguing twist on the usual crime drama, and Herbers — a veteran of Westworld and The Leftovers — leaps off the screen as Kristen, tough as nails and affectingly vulnerable all at the same time. And the supernatural bent allows Evil to venture into some truly skin-crawling territory — especially Kristen’s recurring nightmares about a ghastly demon named George, who is the most unsettling thing I’ve seen on TV in years, broadcast or cable. (Evil thankfully keeps the gore to a minimum, concentrating on psychological terror instead.) Plus, Lost‘s Michael Emerson adds an extra layer of creep as Leland Townsend, a devious rival of Kristen’s… who might actually be the Devil incarnate.

The smart, penetrating writing from The Good Wife creators Robert and Michelle King takes an unflinching look at the nature of evil and deftly probes the tension between faith and science. There are still some unfortunate remnants of the CBS procedural formula here: The pilot spins an involving yarn, only to rush through it and wrap it up in too tidy a fashion. (Based on the descriptions of the first four episodes, Evil will be a case-of-the-week show, with just a few serialized elements.) But the foundation is strong, and I’m interested to see where Herbers takes this complex character of hers. Mulder and Scully might not be coming back to primetime anytime soon… but Evil‘s dynamic duo might be the next best thing.

THE TVLINE BOTTOM LINE: CBS’ Evil serves up a surprising amount of truly unsettling horror, along with a breakout performance by star Katja Herbers.