Pearson‘s first season in the Windy City came to a close on Wednesday — and it could be the last, seeing as how USA Network has yet to renew the Suits spinoff. Should the series fail to score a pickup, viewers will be left with multiple cliffhangers from the Season 1 ender.

Let’s review what went down: After Nick says he wants to confess to killing Tommy Diehl, Keri calls Jessica to help talk him out of it. If he goes to the police, he’ll also be destroying Bobby’s life, Jessica points out. Instead, she brings him back to her home and convinces him to hand over his gun — for his own safety, not hers — before handing him a notepad to write down everything that happened that fateful day. Jessica reads the confession and senses that Nick is keeping some details to himself, like how he disposed of Tommy’s body when Nick is much smaller than the other man.

Meanwhile, Jeff returns to Chicago to surprise Jessica and gets a surprise of his own: a visit from the Justice Department and the FBI. He warns Jessica that they’re investigating her, but she still can’t tell her beau what she knows since they don’t have marital privilege. Jeff urges her to cooperate with the authorities. “It’s the last thing I’ll ever ask of you,” he says in what feels like a breakup scene (noooo!).

Jessica then shreds the FBI files Jeff took for her and goes to meet Bobby in the alley from the pilot’s in medias res opening. When he shows, Jessica observes that he isn’t surprised to hear that Nick killed Tommy… because Bobby was actually the one who offed Tommy! Nick is just taking the fall for his brother. Now that Jessica knows exactly what the mayor’s McGann problem is, she says she’ll fix his mess, but after that, she’s done being his errand girl.

While that scene closes out the finale, there are a few other cliffhangers in the episode, too: 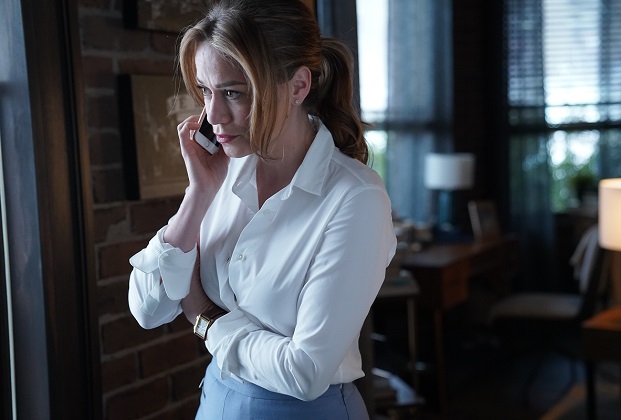 * Derek keeps bringing up the kiss from last week, but Yoli insists it was just a peck. Speaking of the press secretary, he seemingly quits his job after getting into an argument with Bobby.

* Stephanie hands Bobby divorce papers, but says she doesn’t want to end their marriage. She just wants back the man she fell in love with, who impressed her with his passion at a city council meeting.

Pearson fans, are you hoping the show gets another season? What do you think worked and didn’t work in the spinoff? Grade it below, then hit the comments with your thoughts!