AHS: 1984‘s opening hour introduced us to doe-eyed ingenue Brooke Thompson (Emma Roberts), whose plans to study veterinary medicine over the summer were suddenly derailed after a deranged serial killer broke into her apartment, stole her jewelry, and vowed to murder her. (And when a guy who calls himself “The Night Stalker” promises to kill you, you take that seriously.)

As a slightly safer alternative to staying home and waiting for death, Brooke reluctantly agreed to join her new friends — a rad group of aerobics enthusiasts who may or may not have partied with Justine Bateman once — as a counselor at Camp Redwood, a new summer getaway that just so happens to need four new counselors. (Immediate red flag!)

But before we get into the gory details, let’s talk about Brooke’s pals for a second: There’s Montana Duke (Billie Lourde), a hair metal queen who dreams of becoming the greatest aerobics competitor of all time; Xavier Plympton (Cody Fern), a “serious” actor who routinely turns down roles on daytime soaps; Ray Powell (DeRon Horton), an orderly who dreams of more; and Chet Clancy (Gus Kenworthy), a perfect human specimen whose recent disqualification from the Olympics has left him with serious anger issues. (And when you factor in his heavy drinking and cocaine abuse, he’s a real good time.)

Despite a fairly clear warning from a gas station attendant that they should turn back (“You’re all gonna die!”), Brooke and her friends carried onward towards Camp Redwood — and they managed to only run over one hitch hiker in the process! While their handsome roadkill was being treated by camp nurse Rita (Angelica Ross), the new counselors got the lay of the land from camp owner/hair icon Margaret Booth (Leslie Grossman).

Margaret is a devout Christian — and a literal friend of Charles Keating — who came to Christ back in 1970 when her faith kept her alive after a brutal stabbing at Camp Redwood. A deranged gentleman by the name of “Mr. Jingles” (John Carroll Lynch) killed nine campers that night, and even though Margaret survived, she lost an ear in the process. (In case you haven’t noticed, no one is bothering to hide the fact that this camp is serial killer central. The counselors just don’t seem to care.) Anyway, Margaret’s been “fighting the Lord’s fight against filth around the world for years” and is now using her late husband’s fortune to reopen Camp Redwood as a “godly, decent” place for children to escape for the summer.

Speaking of escaping, Mr. Jingles made his glorious return to Camp Redwood this week after breaking out of a local mental institution, setting everyone in the facility free for good measure. And unless Brooke is hallucinating — which we’re pretty sure she’s not — that hooded psychopath has already claimed the lives of the gas station attendant (he tried to warn them!) and the hot, ear-less hitch hiker. To make matters even worse, the final shot of the episode welcomed back Brooke’s “Night Stalker,” who unfortunately appears to be a man of his word.

* Matthew Morrison was a fun surprise as Trevor Kirchner, the camp’s activity director with an insanely big… plan for fun summer activities. Best known for appearing in the background of the Three’s Company opening credits, as well as upstaging Jane Fonda in an unreleased aerobics video (“That thing was flopping around like a baby elephant’s trunk!”), he’s already one of AHS‘ most ridiculous characters yet. 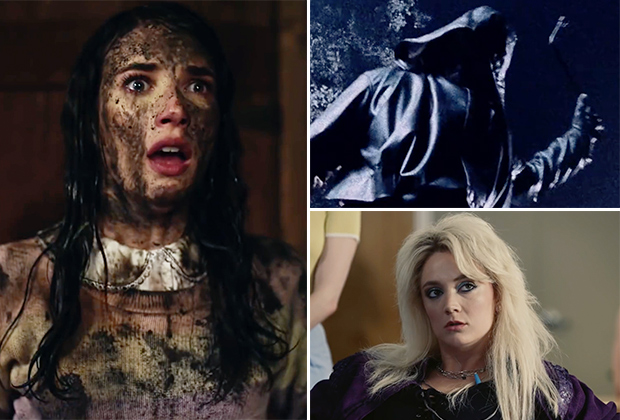 * We also have an immediate soft spot for Chef Bertie (Tara Karsian), who rebuffed Chet’s sarcastic advances: “You wouldn’t know what to do if you got it, handsome.”

* Because we all love a good AHS connection, Brooke’s attacker’s name was Richard Ramirez, a real-life killer who appeared in Hotel as one of James March’s guests for Devil’s Night.

Your thoughts on the first episode of AHS: 1984? Grade the premiere below, then drop a comment with your full review.