Ten years ago, a band of junior college misfits stopped being a study group and became a community.

On Sept. 17, 2009, NBC’s Community launched as a conventional ensemble comedy that quickly evolved into something much more. Series creator Dan Harmon seemed determined to challenge preconceived notions of what a half-hour sitcom could be. His first high concept outing was a Goodfellas parody, which he followed with a paintball game made to look and feel like a high-budget action movie.

By the end of its second season, which included an Apollo 13 parody, an ode to spaghetti westerns and a Claymation adventure made in the style of a Rankin/Bass Christmas special, Community had cemented its status as one of the most experimental, pop culture-obsessed comedies in TV history. 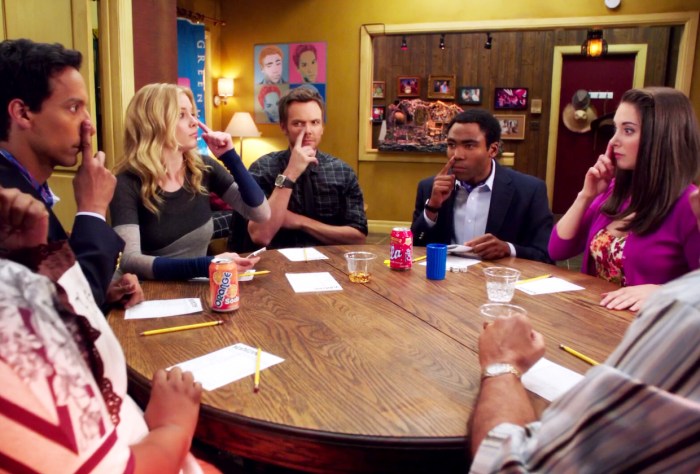 In honor of its 10th anniversary, TVLine has singled out 10 of the very best high-concept episodes — all of which are available to stream on Hulu. Some tough cuts were made along the way (such as the Ken Burns-inspired “Pillows and Blankets,” the Hearts of Darkness spoof “Documentary Filmmaking: Redux,” and the 8-bit video game caper “Digital Estate Planning”), but we emerged with a final list that we’re confident showcases Community at its peak.

Scroll through the attached gallery to see which episodes we considered “cool, cool cool cool” enough to make the cut — Spoiler alert: none of them are from Season 4! — then drop a comment and tell us which episodes you might have included instead.