America’s Got Talent is hoping to end Season 14 on a high note, with eight of its final 10 acts being either solo musicians or vocal groups. And with Wednesday’s grand finale (NBC, 8/7c) fast approaching, time is running out for the viewers to decide their fates.

Of course, if there’s one thing we’ve learned from watching the past 13 seasons of this show, it’s that the deserving act isn’t necessarily the one that ends up taking home the grand prize. With that in mind, have another look at this season’s final 10 acts and ask yourself two questions: Which act will probably win Season 14, and which one should win?

* Singer Benicio Bryant, 14, has been wowing the judges ever since he auditioned with Brandi Carlile’s “The Joke,” exhibiting a vocal prowess far beyond his years. But it was his follow-up performances, including several songs he wrote himself, that really helped Bryant stand out from the pack.

* The Detroit Youth Choir, which earned Terry Crews’ Golden Buzzer during the first round of auditions, has breezed through the competition with powerful performances of songs like Carrie Underwood’s “The Champion” and Panic! At the Disco’s “High Hopes.”

* Opera singer Emanne Beasha, 10, has been on our radar ever since Jay Leno hit his Golden Buzzer for her during the quarterfinals. And even though she’s continued to impress us in each round, her most recent performance — an Italian version of Bryan Adams’ “(Everything I Do) I Do It For You” — nearly cost her the competition.

* Singer and pianist Kodi Lee, 22, was the season’s first breakout star. His audition, a stunning performance of Donny Hathaway’s “A Song for You,” became a viral sensation (45 million views and counting!) and earned him Gabrielle Union’s Golden Buzzer. Blind and autistic, Lee has become an inspiration to countless people. And his subsequent performances, including Calum Scott’s “You Are the Reason,” have made him a viable candidate for this season’s big winner.

* Light-up dance group Light Balance Kids, which earned Ellie Kemper’s Golden Buzzer during the Judge Cuts, has always been a crowd pleaser — but that doesn’t necessarily make it a safe bet. For example, a Marvel-inspired performance in the semifinals nearly sent the group packing, though the Dunkin’ Save came through and secured it a spot in the finals.

* The Ndlovu Youth Choir‘s journey this season has been full of surprises. Despite consistently delivering uplifting, impressive performances, the South Africa-based group hasn’t had the easiest time securing America’s votes. In both the quarterfinals and semifinals, the choir only proceeded by earning the Judges’ Choice after losing out on the Dunkin’ Save.

* Ryan Niemiller‘s brand of self-deprecating humor and positivity in the face of adversity has earned him a special place in the judges’ hearts. Unfortunately, America isn’t quite as enamored. After all, the 36-year-old comedian came close to being eliminated during the semifinals, narrowly making it through by earning the Dunkin’ Save.

* Another Golden Buzzer recipient, 11-year-old violinist Tyler Butler-Figueroa has consistently impressed the judges and earned the viewers’ votes throughout each stage of the competition. And besides excelling at the violin, Butler-Figueroa has a secret weapon: his dancing feet! Strings and steps have proven to be a winning combination for the leukemia survivor. 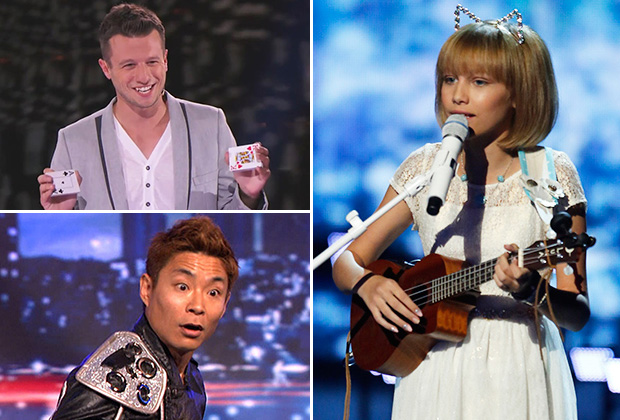 * If ever an AGT act has lived up to its name, it’s the acrobatic dance group V.Unbeatable. Not only did the group earn Dwayne Wade’s Golden Buzzer during the Judge Cuts round, but America has consistently voted it through without hesitation.

* It’s hard not to salute Voices of Service, a vocal quartet made up entirely of veterans and active-duty service members, after everything we’ve seen from the group this season. From Katy Perry’s “Rise” to OneRepublic’s “Choke,” Voices of Service’s powerful performances have left us speechless.

Browse photos of AGT‘s previous winners — you can click here for access to the gallery — then weigh in below: Who will win Season 14? And who should win?