As Season 10 of The Walking Dead hurls our heroes into battle with the walker-skin-wearing Whisperers, the denizens of Alexandria and the Hilltop will have to contend with a danger that’s arguably even greater than their nemeses: paranoia.

“Both sides are wondering, ‘Are people sneaking into our territory? Is there a way that we can turn people on the other side?'” showrunner Angela Kang tells TVLine. “There’s a much more tense, kind of crackling feel to the way they’re interacting with each other as tensions continue to mount. And there are lots of plot twists and turns within that tension as it amps up over time.”

Clearly, this conflict isn’t going to play out like the Saviors War, Part 2. “We’re in a different time in the apocalypse,” Kang points out. “From the trailer, you can see that [our protagonists are] training with different kinds of weapons. They’ve kind of moved into a more forged/medieval style that the blacksmiths are making.

“In this world, our people have the ability to manufacture bullets,” she adds, “but is that really the best use of resources or time, given that, when you’re dealing with a lot of zombies for the most part, you want something that’s reusable, that you can have in hand that’s hefty — quiet, too. Bullets are going to just draw more zombies. Our people have learned to fight in a different, more collaborative way.” 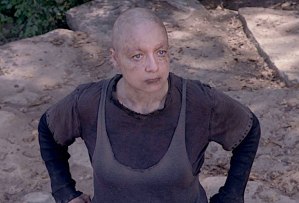 It’s not just the weapons in the Whisperers war that will differ from the ones in the Saviors war, either. “A lot of the Saviors war was sort of a strategic back-and-forth that wound up in battles,” says Kang. “Here, you’re dealing with a nomadic group that doesn’t have a headquarters, so that’s a different type of conflict. There are stories that have to do with the tensions that exist when you are sharing a border that one side does not agree with and that is causing them problems in their day-to-day.”