Bryce Walker may have been the subject of 13 Reasons Why‘s big murder mystery, but he certainly wasn’t the only Liberty High School student whose life was cut alarmingly short in Season 3.

Montgomery De La Cruz also met a gruesome end behind bars, following his arrest for assaulting Tyler back in Season 2. And to complicate matters even further, Monty was posthumously blamed for killing Bryce, a plot hatched to prevent the real killers — Alex and (sort of) Jessica — from going to prison. It was an unfortunate conclusion to a tragic tale of child abuse and sexual confusion, among a myriad other unresolved issues.

TVLine caught up with actor Timothy Granaderos to discuss Monty’s less-than-favorable outcome, including whether there’s a chance we could see him in another form in the final season. (Come on, this show loves flashbacks. And ghosts!)

TVLINE | Did the producers sit you down ahead of Season 3 to explain where things were going for Monty?
I trust Brian Yorkey with every ounce of my being. He doesn’t always say what we’re going to be getting into, but he always alludes to something happening. So whenever he pulls me aside and asks me to take a walk with him, I’m like, “Oh, s–t, what’s going to happen?” When we were starting Season 3, he told me that Monty would be questioning his sexuality, then dying at the end, and I was like, “Whoa.” It’s like when you get a phone call from your parents. You’re like, “I don’t know if this will be good or bad, but they definitely need to tell me something.”

TVLINE | And how did you take that news?
It’s always a little shocking, but as an actor, you hope to get things that shock and scare you — and everything Monty did in Season 3 was shocking and scary. I’m grateful for the dimensions they added to Monty’s character.

TVLINE | This season required a lot from you. Was there a particular scene you found most challenging to perform?
You would have thought that the scene with Winston and I hooking up. When I read that, I knew it was going to be intense. It was a sex scene, and it’s always a little scary to put yourself out there like that, but it was ironically one of the easiest scenes for me to shoot. For Monty, it was just this moment of complete vulnerability, which he never has. 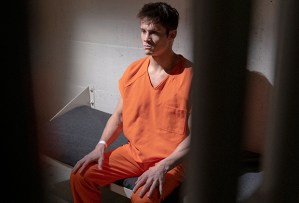 But in terms of the most difficult scene, I’d say it was when Monty’s dad visits him in prison in the finale. In preparation for that, I had to think about what his psyche would be like, and I just kept coming back to this feeling of being completely lonely. So on the day of the shoot, I kind of secluded myself and went to a really dark place. At the end of the scene, his dad spits in his face, and you’re just heartbroken for him.

TVLINE | He never got a chance to make amends before being murdered off screen. Do you feel like his story wasn’t truly over?
It did feel like it ended a little too soon, which was convenient for all those other ding-dongs who got away with the murder. There’s so much more to unpack with his story, and I think he was just beginning to understand who he was and what he wanted. It was a tragic ending to his story, but you never know what’s going to happen next.

TVLINE | Well, Winston is still out there — and he knows the truth!
Exactly!

TVLINE | Do you hope he speaks up in Season 4?
Hell yeah, of course! I hope he tears the whole establishment down and reveals everything. But at the same time, I’m also invested in the other characters as a fan, so I kind of want them to get away with it and move on. It’s been such a turbulent, tumultuous journey for them. Life at Liberty is stressful.

TVLINE | Is there a chance we haven’t seen the last of Monty? Even dead characters have a habit of lingering on this show.
I would like to think so, and with the way we tell our stories, it’s always a possibility. But I don’t really have an idea of what’s really going to happen. I do want to keep working, though!

TVLINE | That reminds me — one of the lines that hit me the hardest was when Bryce was excusing Monty for assaulting Winston. Bryce told him, “He gets beat at home and s–t.” He said it so casually, but a good friend would have intervened.
You’re right. He says it in such a normal way, but that’s not a normal situation to be in. This kid is trying to grow and develop, and that’s what his normal is? Even to his friends, that’s what’s considered normal? What do you think is going to happen? What happened to Tyler in the bathroom was normal for him. It was a joke to him. We know that it wasn’t a joke — far from it — but if that’s what you’re made to believe is OK, you’re not going to have any regrets.

TVLINE | Oof, that bathroom scene…
That was easily the toughest scene I’ve shot on the show. I had a splitting headache at the end of that shoot. It’s hard staying in that. It’s a dark place to be in.

TVLINE | What’s next for you? Something intentionally different from what you’ve been doing lately?
Yes, I hope it’s completely different. I hope it’s so different that they don’t even realize I’m the guy who played Monty. It’s been an awesome journey, but you do wonder if people are only going to see you as the guy who did that thing to that kid. And that’s a constant struggle for actors — breaking the mold and changing the way other people see you.

How did you feel about Monty’s storyline and early demise? Grade the season in our poll below, then drop a comment with your full review.