Cat Chambers, Reef Break‘s pro surfer and grifter-turned-fixer, is on the run while yet tackling her toughest case yet — to clear her own name — as ABC’s summertime escapade comes to a close on a special night, this Friday at 9/8c.

Set in Nimitz Bay, a community on the fictional U.S. territory of Reef Island, Reef Break stars Poppy Montgomery as the aforementioned Cat, who heading into the finale was tricked into helping spring onetime cohort Doug O’Casey out of the clink. Now, Cat is on the lam, believed to have returned to her criminal ways.

TVLine presented Montgomery with some of our burning questions (Is she doing any of her own surfing? Why not let Grant Bowler use his real-life accent? Where did this show come from??), and invited her to tease the finale’s many cliffhangers — which, if France cooperates, could be resolved in a possible Season 2.

TVLINE | What is the Reader’s Digest version of the origin of this show? Because when ABC announced it for their schedule, it seemed to come out of nowhere.
Well, I sort of had this idea for a while about a surfing badass criminal chick on a tropical island. We pitched it and sold it to France, and then ABC Network heard about it and picked it up and suddenly it was 13 episodes, and off we went.  It was pretty wild.

TVLINE | It always took place in a fictional U.S. territory where cars apparently have steering wheels on either side?
Exactly. We made up this island that was somewhere in the South Pacific, but a US territory. We wanted to make it fictional so that we didn’t have to deal with any real baggage or politics of an island that existed. We wanted to create a world where we could almost do anything. It’s a bit like Fantasy Island.

TVLINE | Talk about filming it in Gold Coast, Queensland. What did that mean for you, as an Australian? It must have been a dream.
I mean, it literally was. I love surfing. I love tropical islands. I love riding jet skis and boats too fast. It was perfect. And I got to play a thief, which is far more in sync with my personality than playing a cop. I’m much more of a criminal than I am a cop-type, I think. 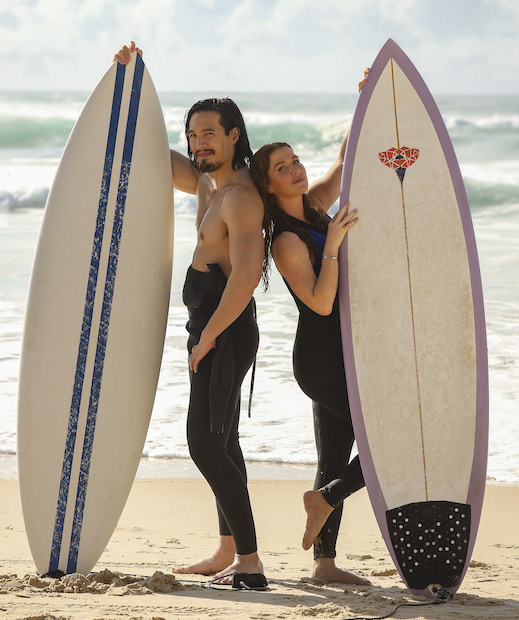 TVLINE | That’s the sense I get watching the show, that this must be among your all-time favorite roles. Like you said, you’re edgy, you’re sexy, you’re flirty, you’re funny, you’re smart….
It’s exactly what I wanted to do. We wanted it to be a wink, and a kind of “TV beach read” for the summer. It’s fun and a bit fantastic. It’s not meant to be heavy or win Emmys. It’s mean to be a sort of homage to all of the shows that I loved that I used to watch in Australia 10 years after you got them in America. [Laughs] But you never got to see girls. I was a young surfer in Australia and I would watch these guys drive fast cars and surf and everything, and I was like, “Why aren’t there any women doing that?” I really can’t think of another female surfer on television ever.

TVLINE | Like, maybe one of Charlie’s Angels surfed when they went undercover or something?
Yeah, or you had Gidget on that giant board. It was never a fierce competitive surfer, and the women in female surfing are badass and I think they need to be represented.

TVLINE | Along those lines, to what extent have we seen you actually surf on the show? I’ve been doing some freeze-framing and can’t quite tell.
Oh, none of the big waves are me. None of the standup. That’s my amazing stunt double, Angie. I got a black eye when I was surfing here in Malibu right before we started filming and they were like, “Nope, you’re not going to surf on any wave. It’s too much of a risk.” The other thing is, truly, I’m not that good. Angie’s amazing, she is truly fierce. She can do flips and all of that in the air. I’m deeply mediocre when it comes to surfing.

TVLINE | And as far as Cat the skateboarder a few weeks back, I called shenanigans.
I did pop it and catch it! I did the flip at the end. But I couldn’t do [those tricks] on a skateboard. I’d kill myself! 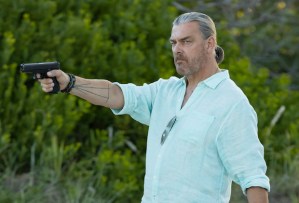 TVLINE | I find the casting of Ray Stevenson interesting and refreshing, because here’s this mountain of a man with salt-and-pepper hair pulled back into a ponytail. And you don’t see guys like that on TV. I feel like this is a guy who has lived a life.
Yeah. We wanted him to have that sort of Russell Crowe, brutish feel to him, and Ray was the perfect guy for it.  He’s like a father figure, in a lot of ways, to Cat, who has daddy issues, clearly. She married the father figure in her life and we wanted that to be real. Then you’ve got Des[mond Chiam as Wyatt], who’s literally the opposite. I mean, he looks about 22. He’s beautiful. Then we’ve got Rob Collins, who’s playing Doug O’Casey…. In the finale, there’s a lot of stuff with Cat and Doug. That’s a love triangle situation that kind of reveals itself in the last two episodes.

TVLINE | Wouldn’t that would make it a square at this point, a rectangle?
And then it veers off again. It might be a hexagon, because Jake is also sleeping with Ana Dumont, the governor. There’s a lot of cross-pollinating going on! 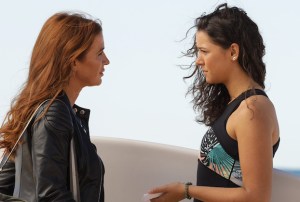 TVLINE | Petra is totally your long-lost daughter, right? A kid Cat put up for adoption or something?
That’s what we should do! That is not a bad idea. You’re brilliant, actually, because we’ve been talking about that. That’s so funny.

TVLINE | I thought it was a bit mean to have Grant Bowler, a Kiwi, on the show, there in Australia, surrounded by what has to be dozens of locals, and make him speak with an American accent.
We never wanted it to look like we were shooting in Australia, unlike Harrow, which is set in Australia. We wanted to show an American territory. But Grant slips his accent in and out there. He has kind of a combo accent. 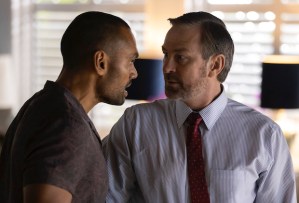 TVLINE | What else can you tease about the finale on Friday night?
Like I said, there are quite a lot of surprises between Cat and her supposed nemesis, Doug O’Casey. Someone goes missing, and someone gets kidnapped…. There’s a lot going on. There are a lot of cliffhangers and it’s a bit of a wild ride.

TVLINE | Are any lives in jeopardy as the season comes to a close?
Oh, yeah. Like five. There are a lot of lives in jeopardy, I will just say that. Like a lot. I’m not sure how we’re going to deal with it all in Season 2.

TVLINE | What’s in it for ABC to renew Reef Break? If the numbers haven’t been huge, what else makes it attractive to them to renew this?
You know, I think we’ve got to take a look at the programming of it; there were so many preemptions and blackouts that it’s hard to get a real read on what the numbers were. Also, you get a lot of bang for your buck on this show, meaning it looks beautiful and we are doing it very “efficiently” when it comes to the price. But I also think it’s one of those shows that, given the right exposure, who wouldn’t enjoy it? It’s a fun ride. I think it’s just got to find its legs a little. And it’s an international co-production, so once it airs in France, we’ll get a real sense of what it looks like. If it’s a monster hit in France…

TVLINE | Oh, so you’ll be dubbed.
It’s the same Without a Trace an Unforgettable dubber. I’m telling you, she sounds exactly like me and it looks like her words match my mouth even though she’s speaking French and I’m speaking English. I have yet to meet her but I’m kind of in awe of her.