CBS’ Magnum P.I. reboot and a star of the original series are set to make beautiful music together, as seen in these exclusive photos from Season 2.

TVLine can exclusively report that Larry Manetti, who played Orville “Rick” Wright on the original, Tom Selleck-led procedural, will guest-star on the reboot in en episode slated to air Friday, Oct. 4 at 9/8c.

What’s more, Manetti will reprise his Hawaii Five-0 guest-starring role of Nicky “The Kid” DeMarco, who assists Rick in opening his new club LaMariana, which is poised to become Oahu’s coolest tiki bar.

“From the moment I met Larry, he gave me his blessing to give my spin on Rick. We were in love before the end of our first cigar together,” Zach Knighton, who plays Rick on the new series, tells TVLine. “I’m so honored and excited that he decided to join us on Magnum — and had to pinch myself when I was watching him perform again behind that piano. People are gonna love to see him back on TV.”

Manetti says, “It was such a thrill to be a part of the new Magnum P.I.,” adding: “Playing Rick in the original series was one of my greatest honors. It was such a privilege working with the whole cast, who were as warm and kind as they are tremendously talented.” 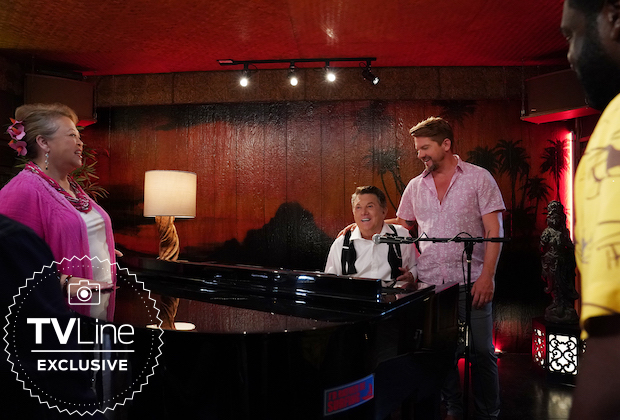 CBS’ Magnum P.I. reboot, which returns for Season 2 on Friday, Sept. 27 at 9 pm (leading out of Five-0), previously had on Roger E. Mosley aka the original series’ TC in a March episode. With John Hillerman passed on, all eyes are now on you, Mr. Tom Selleck….