Arrow will be playing its “greatest hits” as the CW drama unspools its final 10 episodes. And as seen in the first batch of photos from the Season 8 premiere, two of those tunes come in the form of the late Moira Queen (again played by Susanna Thompson) and the equally dead Tommy Merlyn (Colin Donnell).

How on Earth is that possible? 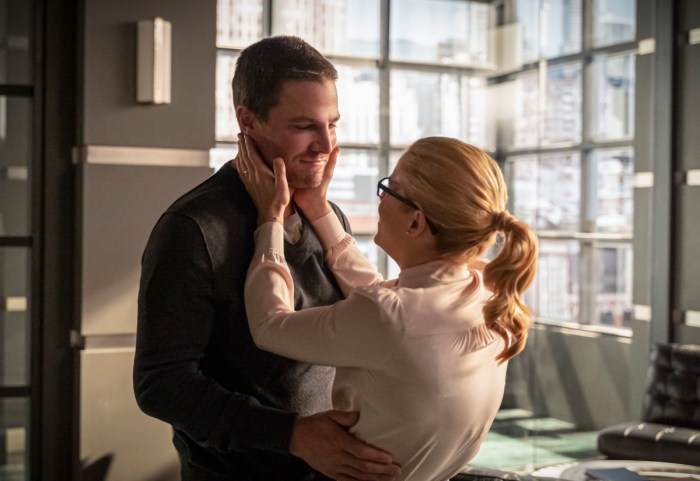 “It’s definitely possible on an Earth,” series star Stephen Amell quipped last month at the TCA press tour. (Season 7 left off with the Monitor from 2018’s “Elseworlds” crossover summing Oliver to hold up his end of the deal they made and “assist me as we seek to prevent the inevitable,” meaning the Crisis in which Barry Allen aka The Flash is doomed to vanish.)

Specifically addressing Donnell’s encore at TCA, showrunner Beth Schwartz said the decision to have Tommy’s portrayer back, again, “was very easy. We like to bring him back every season,” which is kiiiiinda true. (Donnell details many of his encores in this highly entertaining video.)

All told, “We have a lot of guest cast coming back” for Arrow‘s farewell run, which kicks off Tuesday, Oct. 15 and ends in early 2020, Schwartz said. “The whole season is basically our greatest hits [and] we’re kind of tying up some stories that you could have seen in Seasons 3 or 2.”