We’re back to the beginning in the Elite Season 2 finale, with zero hours since Samuel disappeared. But he isn’t really missing. Samu and Guzman — who now believes the scholarship student — have come up with a scheme to put the pressure on Carla to confess. If she thinks something truly happened to him because of her father, then she just might break, Samuel theorizes.

In the meantime, Samuel hides out at Guzman’s grandparents’ house, where he actually gets caught by the Inspector. But in a surprise twist, she pretends she didn’t see him and goes along with his plan. Where the police failed, Samuel and Guzman actually succeed, forcing a distraught Carla to tell the authorities everything about Marina’s murder.

Carla congratulates Samuel on the fact that he played her and won. The downside: He lost her, he says. “You never had me,” Carla replies coolly, but she’s obviously heartbroken. While we’re on the topic of this odd pairing, I must admit that I didn’t really buy Samuel and Carla’s infatuation with each other, but their storyline definitely made Samu way more interesting (and 10 times hotter). Plus, the actors’ intense chemistry made up for any logic leaps. 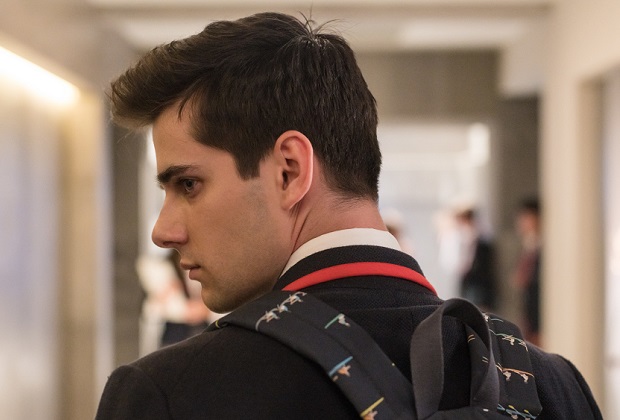 As for Carla’s ex, Polo is finally arrested for Marina’s murder. But with no evidence — Cayetana retrieved the murder weapon/trophy to give her beau a second chance, like he did for her — Polo is allowed to return to school after Christmas break. Needless to say, his former friends are shocked to see him walk into the hallway. (How creepy was that final image of Polo looking up? On a different note, how fantastic is it that Guzman and Samuel are now hugging buddies?)

Then there’s Ander, who’s been lying to everyone all season. When he confesses to Omar that he knew about Polo, his boyfriend reassures him that he was put in a difficult position and screwed up, because he’s human. And it’s going to take a lot more than that for him to leave Ander. Guzman, however, is not so forgiving: “Next time you faint, I hope you smash your head open and bleed to death.”

Meanwhile, Nadia almost tells her parents about the sex video circulating around school of her and Guzman. Instead, she leaves the details vague, only saying that she has brought shame on her family and understands that her place is with them. Surprisingly, her dad is kind of supportive and instructs her to delete the video so they never see it.

The release of the video also helps Valerio see Lu’s true colors. In response, he outs their incestuous relationship, instructing their dad to look under the table, where Valerio has his foot up his half-sister’s skirt. Lu is shocked that Valerio would do that to her since he said he loves her. “Sometimes you convince yourself that you love someone, you idolize them,” he explains, “but suddenly they do something, and in an instant, that image you have of them crumbles, and the love disappears.”

Elite fans, what did you think of the season finale twists? Grade it below, then hit the comments with your thoughts!