It’s a new school year on Elite Season 2, and with it comes another mystery and a scandalous new relationship that makes last year’s polyamorous teen romance look tame by comparison. Of course, the first day of classes also means fresh faces: Lu’s hard-partying, drug-snorting half-brother Valerio (Jorge López) is sent by his mother to live with their dad, while rags-to-riches story Rebeca (Claudia Salas) and her mom move into Guzman’s former house.

It’s another police investigation, however, that opens the premiere. Someone’s gone missing in the future, and by the end of the hour, we discover that it’s Samuel who’s been MIA for 23 hours. So what — or who — could be responsible for his disappearance? There are plenty of options, most obviously Guzman, who is so angry that Samu was allowed to return to the school that he punches him, then forces his own pals to pick sides. That doesn’t sit well with Ander, who sticks up for Samu and tells Guzman that he’ll have no friends if he continues to force ultimatums on them.

Meanwhile, Samu decides that even though he can never forgive Nano for getting Marina involved in his scheme, which ultimately led to her murder, he will do whatever it takes to get his brother out of jail. And in Samu’s quest to take down Marina’s killer, “no matter what it costs,” the first step is a boxing lesson from new friend Rebeca.

GUZMAN/LU/NADIA | Guzman and Lu are tighter than ever after spending the summer at his grandparents’ house, but he still can’t help staring at Nadia (and her new look!) at school. When he corners her in the library, Nadia says he got a girlfriend and started ignoring her messages. Guzman argues that Lu supports him, unconditionally. “That is not love,” Nadia responds. “It’s devotion, like you would have to a God. People that love you will tell you the truth, that Marina’s death won’t justify you acting wild for much longer.”

The truth must hurt, because Guzman tells Nadia she’s at the school thanks to him. He made a deal with her dad that he would stay away from her, so that’s why he didn’t acknowledge her messages, but his statement sure does feel a little entitled, too. “I’m not a princess who needs to be rescued, and you’re certainly no prince. I don’t need you,” Nadia replies.

CARLA/CHRISTIAN/POLO | A summer of traveling with Carla can’t shake off Christian’s somber mood, which has Carla on high alert that he’ll spill the beans about Polo killing Marina. When she brings up her concerns, Polo just casually shrugs them off. Meanwhile, Christian feels like Carla’s just keeping him close so she can pull his strings. She even has her father secure him a place at an American university, not that Christian cares if it means having to betray Nano. Carla texts her dad that she’s worried about Christian revealing the truth, and wouldn’t you know it, Christian is later hit by a car and Carla’s dad comes to the rescue by paying for his treatment in Switzerland. (The news of Christian’s accident also causes Polo to have a panic attack as he begs Guzman to find his pills.)

After saying goodbye to his friends, Christian gives Carla one helluva parting message: “Sooner or later, you will fall. Someone will bring you down. I hope I’ll be well enough by then to dance on your f—king grave.” Then he lifts his bandaged hand, takes off his pulse oximeter and gives a surprised Carla the middle finger. It is both shocking and hilarious.

ANDER/OMAR | Ander is frustrated that Omar still hasn’t come out to his dad. He just wants to kiss Omar in front of everyone, without worrying about who’s watching. “I want to feel free around you,” he explains. “This whole forbidden love thing was fun for a while, but I’m tired of it.” Ander’s face is so sad and pleading that Omar agrees to meet him at the nightclub. That happy moment is immediately followed by Omar returning home to find his father unconscious on the floor after suffering a stroke. When Ander and Nadia arrive at the hospital, Ander totally fumbles the meeting with Omar’s mother, making a series of jokes so terrible that even Omar begs him to leave. 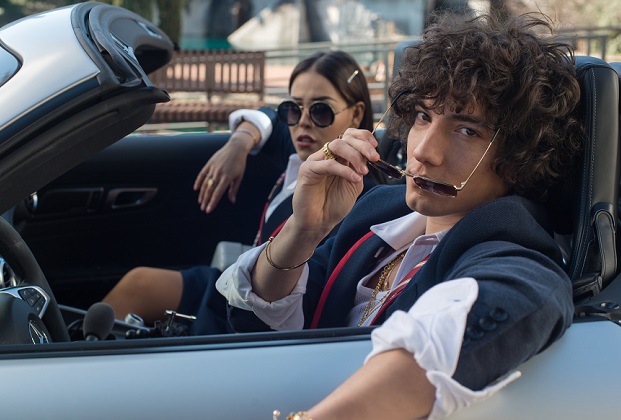 LU/VALERIO | At first, Lu is like the big sister who’s always cleaning up her brother’s messes, but the signs are there throughout the episode that there’s more to these two. For starters, Guzman says he used to get jealous about how much time the siblings spent together. And Valerio repeatedly reminds Lu, her friends and everyone under the sun that he’s her half-brother. So when the two start getting cozy on a pool table, I’m definitely wondering, “Is this going where I think it’s going?” and, boy, does it! Valerio kisses Lu, who pushes him away and reminds him of their promise that this would never happen… again.

Elite fans, what did you think of the season opener? Grade it below, then hit the comments with your thoughts!