Jerry Springer is about to return to the daytime-TV ring, this time not as the referee of a veritable talk-show circus but as a proper, gavel-wielding judge. What is his early verdict on his adjudicating abilities?

As Judge Jerry (premiering Monday, Sept. 9 in syndication), Springer — who worked as a lawyer for 15 years having received his law degree in 1968 from Northwestern University — will settle actual disputes between real people. (Co-executive producers Leah Ponce and Joe Scott previously worked on Judge Judy, Hot Bench and Divorce Court.) Springer’s venture behind the bench is but one of several daytime-TV debuts arriving this fall, alongside The Kelly Clarkson Show, Tamron Hall’s talker, and The Mel Robbins Show.

TVLine spoke with Springer, who clocked in 4,000 episodes as a talk show host, about tackling something brand-new at age 75.

TVLINE | So, how heavy are the shoulders that wear the robe?
Well, I’ve been eating a lot, so they’re pretty heavy. No, honestly, this is the most excitement I’ve had in doing a show. I mean, my [daytime talk] show that I did for 27 years, it was fun, but it didn’t require any brainpower. But these are real cases, and I [tape] 35 cases a week, so it’s like I’m back practicing law again or back in law school. No one starts a show at 75!

TVLINE | When I was prepping for this interview, I had to think, “Look at him, starting this new thing.”
Yeah, that is not normal. But honestly, it’s so challenging, it’s great. It’s hopefully keeping me young.

TVLINE | How “colorful” will the cases you hear get?
Literally, these are real cases. The people that file them all around the country, in all 50 states, have no idea they’re going to wind up on television. Out of the blue they get a call, “Would you like to have your case adjudicated on national television,” with me as a host? And that is a shock to them. Obviously, we pick out the most interesting cases, but it’s not a food fight. People dress as if they’re really going to court, because it really is a court.

TVLINE | They’re taking it very seriously.
Now, I’ll joke around just because I can’t help, but with the decisions I finally make, I want to treat these people with respect because these are serious issues for the people that bother to file the suit. And for some people it’s a lot of money, they want to be reimbursed 5,000 dollars, so I have to be serious about it.

TVLINE | Has that respect been reciprocated?
Unbelievably so. I was not sure how this would be received, considering the reputation of my other show, but it’s unbelievable. 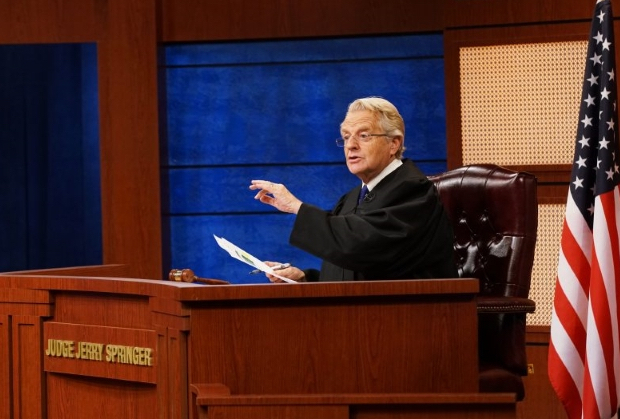 TVLINE | Was this a case of you wanting to do anything different, or did you want to do this?
I had nothing to do with this; it came to me at the last moment. [NBCUniversal] apparently had been thinking about this as a follow-up to [The Jerry Springer Show], whenever it would end. They walked into my office about two months before that show was over and they assumed I knew about it, but I really didn’t. They said, “We think it’s a great move because you’ve got a daytime audience to begin with, and you have a fan base, and you are a lawyer, so….”

TVLINE | And then you probably asked yourself the question I’m about to ask: With all the court shows out there, what could you bring different to it?
What distinguishes each of these court shows — and I feel more strongly about this than I did when I first started taping them — is the personality of the judge. The conflicts are the same but our personalities are different. Me, I guess I treat it as if I were their father or their grandfather. I can be stern but in a hopefully kind way. I’m not yelling at these people.

TVLINE | You’re a Wapner. Maybe a little kinder.
I guess so, yeah. In other words, it’s just me. Like, if this were my grandson or my daughter [as the defendant] and they did something wrong, this is how I would talk to them.

TVLINE | Are there any recurring characters beside yourself? Is there a Rusty-the-Bailiff type?
I have a bailiff, Najee Hinds, and he’s great. He gets a bonus every time he laughs at one of my jokes.

TVLINE | You ran for congress once, and you once considered running for senate. Was the lawyer in you compelled to read The Mueller Report? [Special counsel Robert Mueller testified before Congress after this interview was conducted.]
Oh, yeah, I’ve read it. I do a weekly podcast, too, which is a bit comedy but it’s also a political rant. So, yeah, I stay active politically.

TVLINE | How good of a read is it?
The amazing thing about it is it’s so detailed, and I would not even argue, but just say, that the obstruction of justice charges are right there in print. There’s really not that much to debate. It’s just that impeachment is a political process and if you don’t have the votes because of the political party that’s in power in the senate, you’re never going to get [the president] removed. Impeachment’s easy; the removal is the tough part, with two-thirds [vote] required, so that’s not going to happen.

TVLINE | Lore has it that you decided against the senate run due to concerns about the “baggage” that came with your TV talk show. Does it thus blow your mind at all that the host of The Apprentice became no less than president? I imagine you’ve probably met Trump once or twice.
I was a host of Miss Universe in 2008, the year we did that pageant in Vietnam, so I was an employee of his and I met him a few times. And honestly, he’s been nothing but nice to me. I never had a bad word to say about him at all. I just don’t want him to be president; it’s not personal. I told my best friend, “You know, you’re my best friend but I just don’t think you should be the president.” I have family members I don’t want to be president, and that doesn’t mean I don’t love them. I don’t mix the two up. I’m not going around saying, “Oh, I wish him evil.” I don’t. I just don’t think he should be president.

TVLINE | Before we go, give folks one more reason to watch Judge Jerry.
I’ve got expenses, you know. [Laughs] No, I think it’ll be not just entertaining but interesting. If you think I’m a certain way because of the TV show, I think you may be surprised — and mostly happily surprised — by what you see with me as a judge.