You might want to bring a sweater when you sit down to watch Mayans MC’s sophomore premiere, because things between the Reyes brothers have gotten chilly.

In the world of FX’s Sons of Anarchy spinoff, which returned Tuesday night, it’s been about eight months since Angel learned of EZ’s deal with the DEA, which prompted a fight between the brothers that only worsened when EZ decided to stay in the club. In the Season 2 premiere, it’s clear not much has changed: Angel and EZ are barely speaking, even when club business forces them into the same room — but by the end of the episode, EZ shares some intel with his sibling that piques Angel’s interest, to say the least.

Read on for the highlights of “Xbalanque”:

REBEL YELL | Much of Tuesday’s premiere focuses on the Mayans’ relationship with Los Olvidados, the rebel group with whom the Mayans have been working for quite some time. In case you need a refresher: Cartel boss Miguel Galindo, who was previously at odds with Los Olvidados, is now working with them and their leader, Adelita — but U.S. attorney Lincoln Potter thinks Galindo is working with him, blissfully unaware that Galindo is double-crossing him. Meanwhile, the Mayans are also faking a good working relationship with Potter and his team, all while continuing to work with the rebels in secret. Phew.

At the start of the hour, the Mayans join forces with a team of mercenaries employed by Potter. As the Mayans are all too aware, Potter and his men have been trying to eliminate Los Olvidados completely, systematically tracking them down across Mexico and killing anyone thought to be associated with the group. All it takes is one final job — or so the mercs think — and the rebels will be wiped out for good. But when the Mayans accompany the mercs on this last job, under the guise of helping them kill the remaining rebels, they’re really there to protect the rebels (and themselves) as much as possible.

Initially, everything goes according to plan. When the mercs aren’t in the room, a few of the Mayans plant cell phones and hard drives on the casualties’ bodies, making it look like they discovered valuable intel on these now-deceased men. They even drop some Los Olvidados propaganda around the house, successfully convincing the mercenaries that they just uncovered a treasure trove of rebel belongings. But things go south when one of Adelita’s recruits, a young girl named Mini, is caught by a merc — and when the Mayans realize Mini is about to get brutally tortured, they decide to step in, killing all of the mercenaries in one swift sequence. (EZ gets particularly violent, strangling one of the mercs so hard that the rope leaves gashes in his hand.) 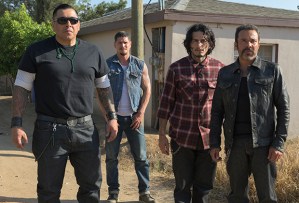 Later, the head of the mercenary group (who got out of the scuffle unscathed) returns to Potter and reveals that all of his men were killed. Potter, in turn, begins to suspect that the entire operation was a trap, and that Los Olvidados haven’t been wiped out, after all. The merc leader insists that he wants Adelita dead no matter what it takes, and Potter puts her back on a list of targets. Meanwhile, Galindo gets word from Alvarez that Adelita is in danger once again, and he takes quick action to get her and the rebels moved out of the remote farmhouse where they’re currently staying. (Also of note? Adelita is pregnant, though the identity of the father remains a mystery.)

Throughout all of this club business, Angel and EZ have hardly said a word to one another. Bishop, Coco and the rest of the members are all a little confused about the brothers’ beef and what it entails — but they’re sick of the cold shoulder all the same. Bishop implores EZ to make things right with Angel ASAP, especially since EZ’s patch vote is coming up, and he’ll need a unanimous vote to be promoted from prospect to full-time club member (though EZ later insists that he couldn’t care less about the vote). EZ does as he’s told, though, and pays his brother a visit at the end of the episode. And though Angel has no interest in the conversation at first, he perks up when EZ drops this bomb on him: “It’s about Mom. I know who killed her.”

* As you’ll recall from Mayans‘ first season finale, SAMCRO member Happy is the one that EZ suspects murdered his mother. (At the very least, Happy was fleeing the scene on the night Marisol was killed, so things aren’t looking great either way.) And although we can’t be totally sure of his involvement just yet, Happy does two very shady things during this premiere. First, when he crosses paths with EZ and Angel’s father, Felipe, he suddenly (and suspiciously) starts asking Chucky questions about who Felipe is and how he’s connected to the Mayans. (Chucky, observant as ever, seems to notice Happy’s sudden interest in the Reyes patriarch, and it makes him uneasy.)

Then, at the end of the episode, Happy goes digging through a box he keeps full of guns, paperwork and other odds and ends. He pulls out a piece of paper that has Marisol’s picture on it, annotated with all sorts of intel about where she goes each day and when she goes there. Even more worrying? Underneath that paper is another one just like it — only this time, the target in the photograph is Felipe. 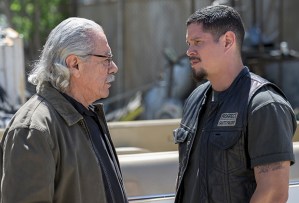 * Potter pays Felipe an unsettling visit at the butcher shop (because “unsettling” is the only way to describe most of Potter’s conversations). But Potter doesn’t call the man Felipe. He calls him Ignacio — his real name, and the one he used during his murky, violent past. “I look forward to our reminiscing,” Potter says ominously before leaving the shop, prompting Felipe to tell EZ about the encounter later in the hour. “Nothing Potter does is random,” EZ warns, though Felipe says he’s fine interacting with Potter, provided he’s not planning to hurt EZ or Angel.

* Galindo’s wife, Emily, becomes more and more involved with his business endeavors — though it still seems she’s not being taken entirely seriously, given that Miguel still leaves Emily out of anything happening south of the border. And there’s another interesting wrinkle in the Galindo household: the increasingly worrying health of Miguel’s mother, Dita, who is making Emily “so f—king anxious” with each passing day. There are still some question marks surrounding Dita’s exact diagnosis… but we do get one big answer in the episode’s final moments, when Dita steals away to her bathroom, takes off the wig she’s been wearing, then disrobes and reveals that the back of her head, and the entire back of her body, have been severely burnt.

With that, I hand it over to you. What did you think of Mayans‘ return? Grade the season premiere in our poll below, then drop a comment with your full reviews!