The residents of Beach City (and beyond) sang their hearts out on Monday with the premiere of Steven Universe: The Movie, a culmination of the hit series’ five seasons of adventures. TVLine spoke with series creator Rebecca Sugar, who also directed the movie, about some of its biggest moments. But first, a quick recap:

After declaring that he doesn’t wish to inherit his mother’s throne, a 16-year-old Steven returned to Earth to resume life with his family and friends, only to be rocked by the unexpected arrival of an evil (yet adorable) Crystal Gem named Spinel. “I’m the loser of the game you didn’t know you were playing,” she told them. “This time, I get to win!” Following an explosive scuffle, Steven’s fellow Gems reverted back to their primitive states, with no knowledge of him whatsoever.

Now believing herself to be Steven’s best friend, Spinel helped him piece the Gems’ memories back together by attempting to recreate familiar experiences, and she became enraged anytime he suggested working separately. As it turns out, Spinel was Pink Diamond’s playmate, and her heart blackened when Pink abandoned her to begin a new life.

Spinel’s dark reawakening resulted in a series of town-destroying battles with the Crystal Gems, until Steven saved her life and showed her the power of love.

“Friendship isn’t going to be easy for me,” she concluded. “I’m going to have to work on it.” And just like that, the other Diamonds showed up and formed an immediate bond with Spinel, eventually taking her back when they return home.

Below, Sugar addresses some of the biggest moments, including Steven’s fusion with Greg and kiss from Connie:

TVLINE | First of all, I loved those Disney-style opening credits.
Thank you. I really wanted to do front credits. That was always going to be a bit of a tough sell. … There are elements of the diamonds that are pulled from golden age animation and illustrations. They should feel like that aspect of the era in the same way that Spinel feels like rubber hose animation from the ‘30s. We really wanted to showcase these inspirations. 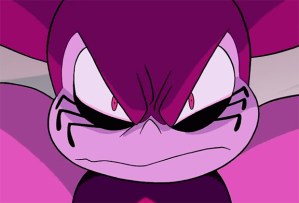 TVLINE | Spinel’s actions triggered a sort of reboot effect for everyone. Was that one of your goals with this movie, to let us re-experience some of our favorite moments from the show?
Yes, but I wanted it to feel new at the same time. That was something exciting to me. This show is so character-based, so I wanted to celebrate what we’ve been through with these characters, but also approach it in a new way. Almost reinvent their stories a little bit, twist them with new ideas. I loved that this time Sapphire was the one who was defying fate and pushing Ruby out of the way. We got to explore the characters based on the foundation we’ve created for them, while also introducing new ideas.

TVLINE | My personal favorite new introduction had to be Steven and Greg’s fusion.
We’ve been wanting to do Steg for years and years. We were talking about him in some of our earliest writers meetings. We just hadn’t found a place climactic enough to warrant how powerful he is. We had some old episode ideas about a battle-of-the-bands situation, and they were really cute, but they never made it all the way into production. We’ve just been waiting for our opportunity to introduce Steg.

TVLINE | The fans will certainly enjoy that little kiss Connie gave Steven. Was that an important thing you wanted to include for fans?
Well, they love each other. It’s not a question to me. It felt intuitive, and he’s finally in peace time, so the hope is that he’s going to have some great teenage experiences like a normal human being… before that gets ripped away from him. Internally, it was a bit of a no-brainer. We just knew that was where they were at, and Connie was bound to be a little more forward than Steven.

TVLINE | Spinel’s story was so heartbreaking and tragic. What message do you want people to take away from it?
I really want people to take away the idea that it’s OK to be a work in progress. You really need to want to feel better. That’s really difficult to do. No matter how much you want to help somebody, you can’t make them want that. No matter how far along you are on your journey, you’re still going to be on it — it’s not going to be over. So the sooner you can enjoy that you’re always growing, the better it’ll feel to be traveling through life.

TVLINE | Lastly, as a Broadway fan, I want to thank you for giving us Patti LuPone and Christine Ebersole in surround sound.
I went to see them in person when they were doing War Paint [on Broadway], and Patti was like, “You should write us a duet.” I will do anything she wants.

What did you think of Steven Universe: The Movie? Grade it below, then drop a comment with your full review.