This week on The Affair, Joanie’s job takes her to a climate change-ravaged Montauk — and back to her childhood home. But before that happens, Episode 2 revisits Vik’s funeral from Janelle’s point of view, and Helen gets to know Sasha Mann.

PART ONE: JANELLE | Janelle is getting ready to attend Vik’s funeral and FaceTiming with Anton. She receives an email from the Compton Academy board of directors, who want to meet with her to discuss her application to be reinstated as school principal.

Next, Janelle arrives to retrieve Noah from his breakfast with Sasha Mann. Noah introduces her as his girlfriend, and mentions to Sasha that she works with kids from Compton and Watts “who no one cares about.” Sasha applauds Janelle for her efforts and gives her a hug before he leaves. Following his embrace, she says, “I’m sorry, Noah didn’t mention your name.” She doesn’t recognize him. Noah has a good laugh. 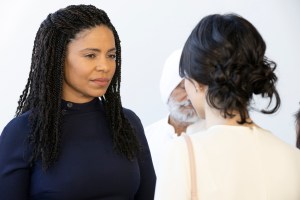 When Noah and Janelle arrive at Vik’s funeral, Janelle realizes they’re the only ones in attendance at the Hindu service who aren’t dressed in white. When they enter the service, Noah embraces his kids and introduces them to Janelle — for the first time. After the service, she keeps her distance while Noah consoles Helen, and accepts a video call from Joel. He calls to let her know that he’s been named co-principal at Compton Academy. “We’re on the same team now,” he says, while raising his fist in solidarity. After she ends the call in disgust, she goes to find Noah and gets stopped by Whitney. “I just wanted to say that I think it’s so awesome that you’re my dad’s girlfriend,” she says. “Dating a woman of color might be one of the coolest things he’s ever done.” (Oof.) After Noah’s daughter walks away, Janelle says under her breath that “‘girlfriend’ might be a strong word.”

Back at Helen’s house, Janelle considers sending the head of the board of directors a strongly worded email, but is interrupted by Noah before she has the chance to hit “send.” Moments later, Bruce approaches from behind and mistakes Janelle for a member of the wait staff, just as he did from Noah’s perspective — only this time, he doesn’t seem like a confused old man battling dementia. Even worse, Noah doesn’t think anything of it. Helen approaches soon after and complains about the valet. Noah interjects to reintroduce his ex-wife to his maybeeee-girlfriend, and no sooner does Janelle offer up her condolences does Helen asks Janelle to go out and see if she can remedy the problem with the valet. She thinks Janelle “might have more luck” with this particular valet. Janelle heads out to find that the man is African American. He explains to her that he was only trying to tell Helen that someone is double-parked; they’ll need to move their car before attendees start to leave. Disgusted, Janelle heads back inside to relay the message to Helen, but decides to leave when she sees Noah bonding with his children. She sends him a quick text to let him know that she’s heading to her meeting and they’ll talk later.

At said meeting, the board of directors insist that making Janelle and Joel co-principals is not a reflection on the job she has done as Compton Academy’s sole principal. But when asked what they mean when they tell her that this is a chance to “develop her strength and work on her weaknesses,” Janelle is informed that there have been numerous complaints from faculty. And so, Joel has been installed to “ease some of the school-wide tensions.” Moving forward, he’ll be a public face for the school, while she’ll continue to work internally. She’s handed a new contract and told to get it back to them ASAP. 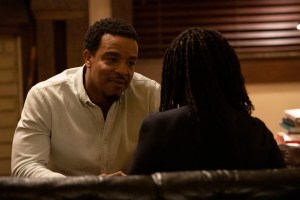 Afterwards, Janelle returns to her car and sees a series of texts from Noah, asking if he did something wrong. What’s more, he’s completely oblivious to the meeting she just attended. Rather than respond, Janelle heads over to ex-husband Carl’s house. She wants him to look over her new contract. Carl pours her a stiff drink, then reads it over. He says it’s all on the up and up and there’s no reason for her not to sign it… unless she came here hoping he’d tell her not to. That’s when tensions escalate and we’re informed that their marriage ended after he slept with his 26-year-old protege. Once they calm down, Carl tells it to her straight: “You’ve been in this field 20 years. Are you really gonna give up half your power to someone who is gonna take all the credit and let you do all the work?” he asks. “Don’t you get it? They don’t want you to do this job because they don’t want you to do the job at all. They don’t want you.” He tells his ex that she’s brilliant, but her three degrees and years of teaching experience aren’t going to “lift her up above all the bulls—t… It’s not you, it’s them.” He then suggests that, instead of agreeing to be Joel’s co-principal, she runs for school superintendent and becomes Joel’s boss. Heck, she’d be her boss’ boss! He even agrees to assist with her campaign, having recently helped get Anton’s former babysitter Ava elected senator. When Janelle asks why Carl’s not sleeping with Ava, Carl takes Janelle’s hands and says that Ava is not the woman he wants to be with. And as Part One comes to a close, the exes share a passionate kiss.

PART TWO: HELEN | We pick up three months after Vik’s funeral. Helen, Noah and Whitney are on the set of Descent, watching as Sasha and his co-star act out the scene where Noah confronted Helen about his affair with Alison. Helen looks exhausted, and Whit insists that her mom’s suffering from PTSD. Noah apologizes to Helen, but she assures her former hubby that she’s fine, and heads to craft services to make herself a cup of coffee. There, she meets Sasha for the first time, who insists that she give him notes on the scene she just watched. Helen tells him that the “Ellen” character comes off as “broken,” and she needs to come off as “more of a bitch.” And he needs to be stronger, too. Noah apologizes on Helen’s behalf, but Sasha says there’s no need. He appreciates her candor and invites her to lunch, but she declines.

Shortly thereafter, Helen and Whitney head out to attend a rehearsal of Trevor’s school play, Fun Home, during which Helen dozes off long enough for Trevor to take notice. After the rehearsal ends, Helen is approached by Brooklyn’s mom (played by Teen Witch‘s Robyn Lively), who, after Whitney lets slip that Sasha asked Helen out on a date, insists that Helen take the movie star up on his offer. When Helen gets home, she heads to her bedroom and immediately Googles whether she has narcolepsy, and whether it can potentially kill her. That’s when she receives a text from Sasha, who asks her to come “hang out.” 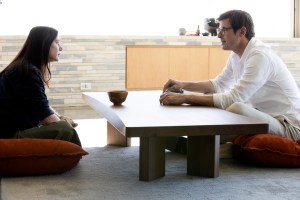 Sasha arranges for his driver to pick Helen up and bring her to his home, where he asks a series of deeply personal questions to better understand the “Ellen” character. Rather than answer them, Helen admits that she thinks Descent is a poorly written book beloved by some not-so-smart people. She gets up to leave, but Sasha insists that she stick around, rather than return home and continue to Google her own demise. They engage in a game of basketball, but that ends when Sasha accidentally hits Helen in the face with the ball. Soon after, Helen gets up to leave but nearly passes out. She sits back down and throws up.  When Sasha steps away to clean up, Helen has a vision of Vik, who says, “I’m so sorry,” and “I never meant for any of this to happen.” Overwhelmed, Helen breaks down in tears and admits to Sasha that she recently lost her partner. “Something’s not right with me, and I can’t wake up,” she says. Sasha tells Helen that he, too, lost someone. That’s when he started to study with a Zen master and gave up most of his worldly possessions. Before Helen writes him off completely, he wants to introduce her to something that might help. She then joins him for aerial yoga and starts to feel a bit better.

When Helen returns home, she’s finally ready to play the video that Vik left for her on a USB drive. In his goodbye, he encourages Helen to spend the remainder of her life doing for herself, rather than doing for others.

PART THREE: JOANIE | When we last left Joanie in the future timeline, she had downed an entire bottle’s worth of anti-anxiety medication. We pick back up with Cole and Alison’s adult daughter making herself throw up the pills, then preventing her smart toilet (!) from saying aloud the contents of her “deposit” to keep her attempted overdose a secret from Paul.

The next day, Joanie returns to work. She appears to be employed by an environmental agency that does what little it still can to preserve what’s left of lands destroyed by climate change. She goes in to see Lane, her very pregnant boss, and asks for her next travel assignment. Lane tells her to take some time to be with her family — it’d be her fourth time away from Paul and the girls just this month — but Joanie insists on another assignment. And so, Lane sends her to complete an erosion study in Montauk.

On the train ride there, Joanie’s train is delayed in-transit by flooded railroad tracks, and uses this time to phone Paul. He tells her how much the girls miss her, to which she replies, “I know,” not, “I miss them, too.” She then proceeds to lie and say that Lane practically begged her to take on this assignment. Then, before her train pulls into Montauk, she tells Paul she’s staying at “Dad’s place.” He doesn’t seem to think it’s a very good idea. “It’s fine,” she assures him. 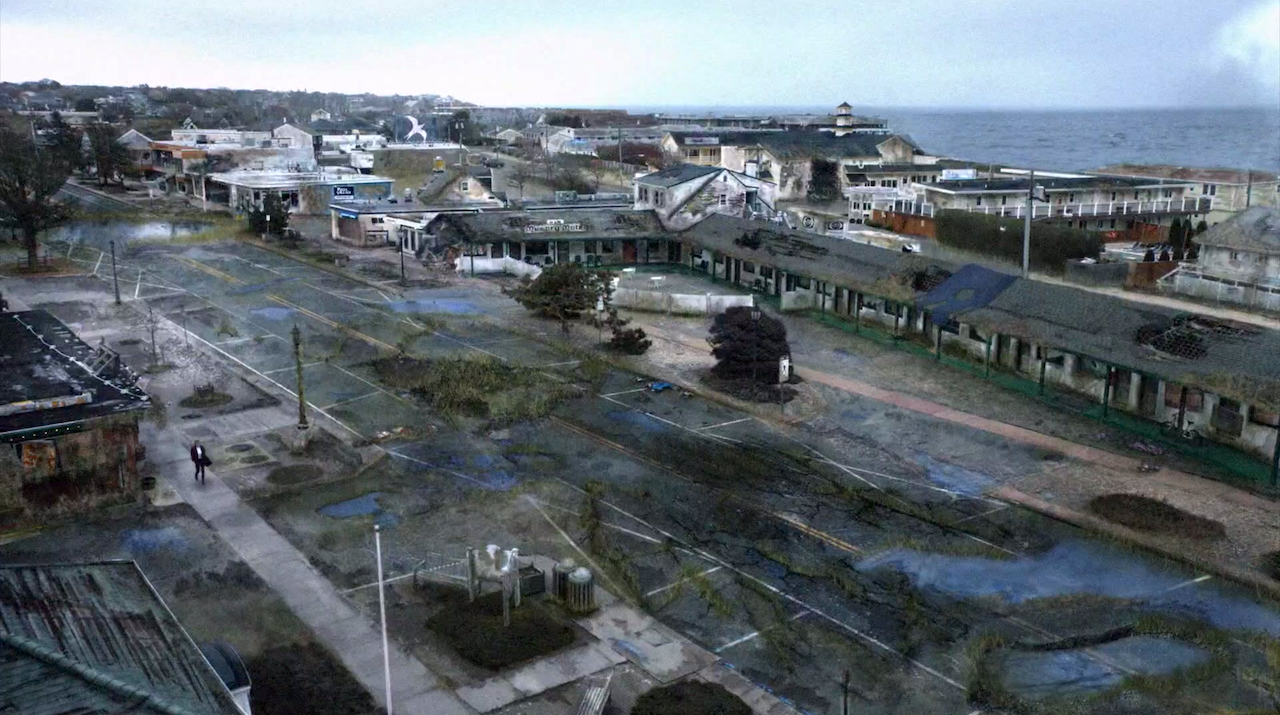 When Joanie arrives in Montauk, the once-gorgeous beach locale is completely deserted. As she walks through town, we get a bird’s-eye view of shuttered businesses and abandoned homes; the infrastructure is crumbling due to rising sea levels. And as the hour draws to a close, Joanie arrives at Cole’s seemingly abandoned home. She uses the back end of a flashlight to break a window panel and let herself inside, before the scene cuts to black.

What’d you think of The Affair Season 5, Episode 2? And what do you expect Joanie will find in Cole’s home? Hit the comments to log your thoughts.