Based on this first look at The Good Place‘s final season, Eleanor is responding to her Chidi-induced heartbreak by… finally getting a 9-to-5 job?

NBC has released the first photos from the Emmy-nominated comedy’s Season 4 premiere, titled “A Girl From Arizona,” and in them, we see Eleanor trading in her usual T-shirt for a tasteful business suit — part of her role pretending to be the new Good Place neighborhood’s architect, we’re guessing. Even more alarming, there’s no sign of Chidi at all in the nine new photos, after he had his memory completely wiped in the season finale. Is it even still the Soul Squad without Chidi around to nag everybody, we ask you?

Also catching our eye in these first-look photos from the premiere, airing Thursday, Sept. 26 at 9/8c:

* Tahani and Jason wrapping up Eleanor in a warm group hug, while Michael and Janet observe this strange human custom with mild confusion.

* Janet and Tahani spying on someone through a doorway. (We’re kind of excited to see those two team up, to be honest.) 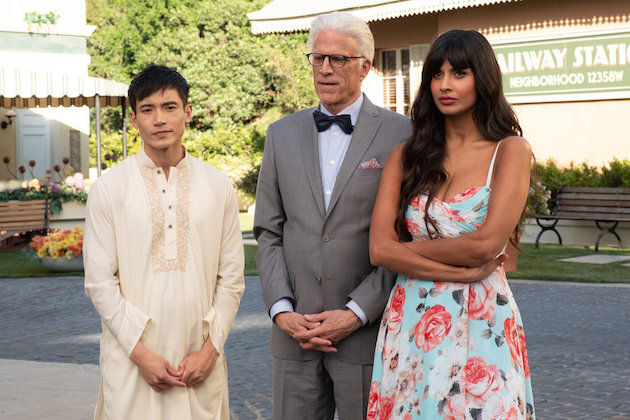 * Jason sitting alone with his thoughts. (A terrifying prospect, to be certain.)

* The gang dressed up for another swanky “welcome to the neighborhood” dinner, with Eleanor decked out in a little black dress. (Hoping to catch Chidi’s eye, perhaps?)

Check out the gallery to the right — or click here for direct access — for a sneak peek at The Good Place‘s final season, and then hit the comments to share your first impressions.