It’s the beginning of the end for The Affair, which starts its fifth and final season by killing off one (and potentially two) characters, and introducing the all-grown-up Joanie Lockhart, played by True Blood‘s Anna Paquin. 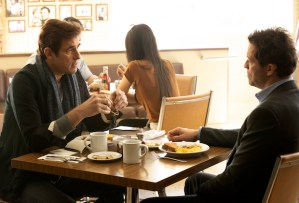 PART ONE: NOAH | Noah meets for breakfast with actor Sasha Mann, who is set to direct and star in the film adaptation of Descent. He picks Noah’s brain to better understand the Daniel character, and mimics Noah’s every move, down to the way he puts scrambled eggs on each individual bite of toast. He tells the author that he was captivated by Descent because he, too, is addicted to toxic relationships. The only thing he’s not sold on is the ending, which finds Daniel hit the Alison stand-in with his car.

The meeting is ultimately cut short so Noah and Janelle can attend Vik’s funeral. They arrive at the wake to find Helen seated with the kids, as well as Sierra and Vik’s newborn child. After the service has concluded, Noah offers to drive the kids to the grave site, but Martin suggests that Dad meet them back at the house instead. Moments later, Bruce approaches and greets Noah. He’s unusually cordial towards his ex-son-in-law, and it’s deeply unsettling. Meanwhile, Margaret meets Janelle and says how nice it is to be introduced to “another one of Noah’s women.” (Heh!) That’s Noah’s cue to leave, but before he takes off, he heads inside to see what’s keeping Helen, as if that’s any of his business. Turns out Vik is supposed to be buried to honor his Muslim father, but his Hindu mother Priya is giving Helen a hard time about the arrangements. She wants her son to be cremated, and she won’t take “no” for an answer. Noah takes Helen aside and says she’s not going to win this one, then Helen tells Noah to f—k off, as she should.

Back at the house, Noah and Janelle are out on the balcony when Bruce approaches Noah and congratulates him on how well he’s done for himself. He thinks he’s standing in Noah’s house, and appears to suffer from early onset dementia. To make matters even more awkward, Bruce turns to Janelle and mistakes her for the help. Janelle, who’s already upset at Noah for downplaying an issue she’s having at work, makes a beeline for the front door. After she leaves, Noah consoles Helen and says that she’s the most resilient person he knows. He asks if there’s anything he can do for her during this difficult time, to which she replies, “Don’t go.”

We next see Noah tidying up in the kitchen while conversing with Colin. Whitney eventually interrupts to retrieve her beau and bring him into the living room, where everyone except Noah is gathered to watch a video that Vik recorded before his death. In the video, he says goodbye to his loved ones, and gives the toast he had written for Whitney and Colin’s wedding. (Yep, Noah and Helen’s oldest daughter is engaged, and she neglected to tell her father.)

Later that night, long after everybody else has left, Noah goes in to check on Helen, who is just waking up from a much-needed nap. She eventually comes out to have a glass of wine, while Noah goes out to check and see if an earlier problem with the valet has been resolved. He then proceeds to take Helen’s trash to the curb, before she stops him. “That’s Vik’s job!” she exclaims, before she lets loose on Noah.

“Do you ever wonder why I’m so resilient? Because 10 years ago you walked out on our lives and left me all alone with four children to go f—k a waitress you just met in a restaurant,” she says. “I had to raise these kids by myself, and I had to rebuild my life by myself. I had to be resilient, and for you to say that to me like it was some kind of choice… You know who had a choice? You. Vik didn’t have a choice. He got cancer.

PART TWO: JOANIE | We fade in on Cole and Alison’s fully grown daughter at an undisclosed point in the future. She has two daughters of her own, Thea and Madeline, with husband Paul (She’s Gotta Have It‘s Lyriq Bent). Madeline, we soon learn, is adopted. It’s her sixth birthday, and her party has just ended. Joanie heads out to retrieve Thea and Madeline from the backyard to put them to bed, then proceeds to her indoor garden. She picks up a bowl of fresh strawberries, then adjusts the oxygen flow via a semi-automated system. (It’s fair to assume that this set-up has something to do with climate change.)

Afterwards, Joanie draws a bath, and watches via tablet as Paul says goodnight to the girls in the other room. Soon after, he enters the bathroom and downplays Joanie’s anxieties about Madeline finding out that she was adopted. He then asks his wife what she wants to do for her birthday — and the answer is absolutely nothing. “If you get me a cake, a present, anything, I will leave you,” she says, bluntly. “This is the age that my mother died.” This is new information to Paul, who agrees to forgo any festivities. We then cut to Joanie and Paul in bed. They’re having sex, but Joanie just lies there, completely still, and tells Paul to finish. “Joanie, what’s going on?” He asks. “I miss my dad,” she says, which is a very weird thing to hear your wife say immediately after sex. Nonetheless, it’s a significant moment that suggests that Cole (former series regular Joshua Jackson) is either estranged from his daughter — or dead. Joanie then gets up and heads to the bathroom. She takes a bottle out of the medicine cabinet, which reads, “Take one pill for symptoms of anxiety.” She empties the bottle into her hand, and downs what looks to be at least a dozen caplets. 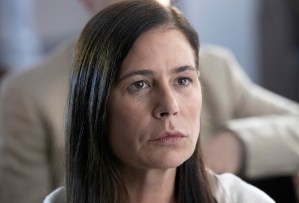 PART THREE: HELEN | Helen enters Sierra’s home to find all the women from last season’s Joshua Tree retreat. They are gathered to “manifest Sierra’s daughter from the celestial realm into her corporeal being” — whatever that means. Upstairs, Sierra is in labor and being coached by her doula. Helen thinks the whole thing’s ridiculous and wants to take Sierra to the hospital to deliver Vik’s child, but the doula insists that Sierra stay put. And so, Helen returns home, where Priya is tending to Vik. We see him in a hospital bed, too weak to communicate or open his eyes. Helen feeds him his pills, then tells him to hold on just a little while longer. She returns to Sierra’s once more, but retreat leader Gaelle tells Helen to leave them be. They’ll call as soon as the baby gets there: They know how important it is to Vik.

Noah turns up soon after. He’s there to talk to Helen about the kids, who have been staying with him since Vik got sick. They’d like to come back home and say their goodbyes, but Helen thinks it’s a bad idea. Noah then offers to come and stay with the kids at the house, so Helen doesn’t have to be alone. But before Helen has a chance to say, “Hell no! I don’t want my ex-husband living in my house with my dying boyfriend,” the hospice nurse comes out and tells Helen that Vik is about to die. Helen proceeds to the bedroom to be alone with Vik, and tells him that it’s OK if he’s ready to let go. Suddenly, there’s a knock at the door. It’s Noah, along with Sierra and the baby. Sierra is wheeled in by the nurse and places the infant on Vik’s chest. It’s a boy, she says. His name is Eddie. Within seconds, Vik begins choking on fluid. Sierra removes Eddie from his chest, then the nurse pronounces Vik dead.

A closing montage finds Helen go through the motions of Vik’s funeral. After the gathering, back at her home, she retreats to her bedroom, where she begins to remove the sheets from his hospital bed. She finds a USB under his pillow with a post-it note that reads, “For Helen. Play me.” She places it in a drawer for now, then lies down to take a nap.

What did you think of The Affair‘s final season premiere? And the decision to (maybe?) kill off Cole? Grade the episode via the following poll, then hit the comments with your first impressions of Paquin’s Joanie.